OK I know it’s been a long while since I’ve posted, but I finally made it back and I have a lot to tell you, in particular about Friday night. I had the pleasure of attending a charity gig at the Junction in York. A mighty array of excellent acts had been assembled by Simon Pattinson to aid two local charities; York Guardian Angels and the York Hospital Radio. Like me Simon is a volunteer at York Hospital Radio as is Tom Wycks (more of him later) who designed the flier. £5 for five acts is a bargain anywhere, but here with such a superb selection it was a stupendous bargain. But enough of that, you’re probably dying to find out who was on the bill aren’t you? 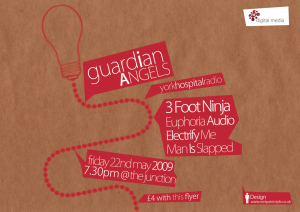 The flyer from Fridays gig

First up was ‘A Man Is Slapped’. How can I describe him? Well what if the Human League were a hip hop band? That might go someway to describing this somewhat genre defying chap. I have posted a Man Is Slapped review before. I was impressed then and I was even more impressed on Friday. He does a fantastic song live where he overlays all the backing parts and then sings over that overlaid loop. He also does some great beat boxing too. If you get a chance to see him, take it!. Also if you have the misfortune to find yourself in York Hospital in the coming weeks you may get to hear him on the Hospital Radio Station. Tom Wycks (see I said there would be more of him later) has arranged to record a Man Is Slapped interview. Tom’s show usually goes out at 8pm on Wednesdays and I must say it is very good.

Second up was ‘Electrify Me’ now let me use another ‘what if’ to describe him. What if Brian Eno had been born no more than twenty years ago? This young guy is an electronic multi-instrumentalist. Well I say instrumentalist but he seemed to be making music with sounds synthesised from old electronic equipment. Including a Game Boy, well at least I think it was a Game Boy, for all I know it might have been a a Star Trek Phaser or just a simple hole punch. He did a storming cover of “Tainted Love” which was made famous by Soft Cell in the 80s but written and recorded by Gloria Jones and was a big Northern Soul hit in the 70s. Anyway back to Electrify Me, this guy is a must for student parties and festival dance tents. You cannot help but move your feet to this guy’s unique sound and he even made the Nokia tune sound cool!

Third up was a band who joined the bill too late to appear on the flier. They’re called ‘Front Room Antics’ I’ve enjoyed the ‘what ifs’ so far so here’s another. What if Orange Juice (the band not the drink) hadn’t been invented until now and were infused more with blues than soul? yep that could be these guys. Good sound and they know how to jam, which they did especially well during the broken string incident (hey that would make a great band name!).  An excellent vocalist that drank red wine too, now that hasn’t been seen since the days of Rod and the Faces, although Rod and the boys were so ill mannered they necked it straight from the bottle. I detected some influences in the ‘Front Room Antics’ sound notably Franz Ferdinand, Kings Of Leon and Television. This band might not be the fastest stringers in the west but they are a great band with excellent potential nonetheless!

‘Euphoria Audio’ were next and yes there is another ‘what if’ (although I don’t think it’s a good one) What if the Lost Prophets weren’t Welsh? That would only go a very, very small way to describing this band. When they started I thought Kasabian only a more dynamic and so much better, then I thought Lost Prophets (as you might have guessed). In fact whilst there are some influences here this is a very original and very superb band. Very tight instrumentally and with a fantastic rock vocalist. This band would work well at festivals and have the potential to perhaps fill stadiums one day. They also have a song in an Internet song contest; 1click2fame, so click here to vote for them.

Finally there was the headline act ‘3 Foot Ninja’. What can I say? How about another ‘what if’? What if punk and power pop were in fact conjoined twins? That barely does them justice but goes someway to describing their rich, eclectic and truly marvellous sound. They have real energy, very loud but also very skilled musically. I had heard of them but never actually heard them until this gig and boy am I glad I saw them. I will definitely go and see them again. They included two incredible cover versions in their set. Firstly Dizzee Rascal’s “Dance Wiv Me”  and they finished with an awesome (and regular readers will know that I use that word very sparingly) cover of the Prodigy’s “Breathe”. My advice is gather up all of your X Factor shite and burn it, then replace it with whatever you can get by 3 Foot Ninja!

Let me finish by saying a big thank you to Simon P for making this all possible and for helping to raise money for two excellent causes; Guardian Angels and York Hospital Radio. I can confirm that £170 was raised.