“Well I gave him roasted toadstools and a glass of dandelion wine” April 1, 2009

Good day to you regular bloggees, is that the correct terminology for blog readers if the writers are bloggers? Anyway welcome to April 1st also known as April Fools Day or All Fools Day in some quarters. Have you read any of the papers today? There’s a great story in the Guardian in the UK, it says that they will no longer publish on paper but that they will move publication exclusively to Twitter. I wonder how many people fell for that one! If you want to know more about the April Fools day tradition check it out at Wikipedia

I thought that I’d once again stray from the usual format today, well mostly anyway. I do have a couple of ‘onthisdays’ before we move on to a more All Folls day related post.

Firstly I would like you all to take time out and listen to at least one Marvin Gaye song today, the 25th Anniversary of his death. He was shot dead by his father at his parents home in LA. Marvin’s father was found guilty of voluntary manslaughter and sentenced to 5 years. If things work out there will be more on Marvin tomorrow.

Also on this day in 2001 the UK press was full of stories about former Spice Girl and one time Scary Spice Mel B. Allegedly she had been advised to sell her £3.5m mansion (which incidentally is in Marlow where I used to live!) because she couldn’t afford to run it. She had supposedly told friends that she had taken out a £500k bank loan to help with the upkeep. 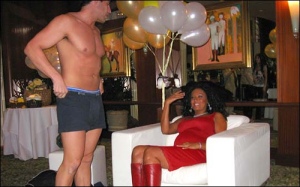 So onto the April Fools related stuff and I promise that this will not involve any digs at that Fat Dancer from Take That (copyright Noel Gallagher). But it will include David Bowie, yes him again! As much as I really dislike this song today is the perfect day to bring it back. Can you guess what it is yet? yep you’re right it’s “The Laughing Gnome” not exactly the Dame’s finest hour but in many ways better than a lot of the crap he produced in the 80s. Sadly as I am a big Bowie fan my collection includes “The Laughing Gnome” and all the 80s crap too. Bowie recorded Gnome in 1967 which is when it was originally released, it was never a hit then though. But it was reissued on the back of his Ziggy related success and reached number 3 in the UK in 1973. When he did the Sound And Vision tour in 1990/91 there was a phone line where you could call in the hits you wanted him to play. The NME mounted a campaign to get him to play “The Laughing Gnome”. It was quite successful too as I believe that he did play it once on that tour. Click here to listen to that Bowie classic, I double dare you!

I’m not a big fan of comedy records but I do have a soft spot for “Ernie (The Fastest Milkman In The West)” by Benny Hill (a UK number one in 1972) perhaps because my late great father was a milkman, although he wasn’t called Ernie. Although amusingly enough there was an Ernie who worked at the same depot, I don’t recall him being particularly fast though. I worked as my dad’s milkboy from 1970 to 1975, I suppose that was my first ever job. It was a fantastic job too, I never realised until the last few months of my Dad’s life, he died in 2001, exactly how great those years working together had been. It gave me the perfect opportunity to spend so much time exclusively with my Dad, if I was to live my life again that is something I would definitely not change.

And to end this April Fools Day post what better song to do it with than Steve Miller’s “The Joker” enjoy yourselves good people! 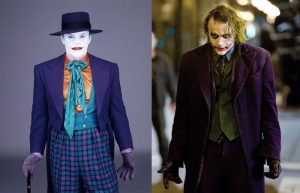 Every pack of cards has two jokers and now so does this post! Heath ledger RIP