We’re up to the letter G in my ABC of Motown Christmas Advent Calendar, which means that today is December 7th. Todays song is from the, in my opinion, very much underrated Richard Dean Taylor. He is better known. He is a Canadian and was born in Toronto in 1939, which makes him 72, just like yesterday’s featured artist Jimmy Ruffin.

Taylor signed with Motown in 1964 as a songwriter. His first single was scheduled to be”My Ladybug (Stay Away From That Beatle)” which was deemed unworthy of release. His biggest success as a writer or cowriter at the label was with songs such as “I’ll Turn To Stone” by the Four Tops and “I’m Livin’ In Shame” from Diana Ross and the Supremes. One of his biggest hits was actually one that he didn’t have a hand in writing. It was “There’s A Ghost In My House” which was written by the classic Tamla Motown writing team of Brian and Eddie Holland and Lamont Dozier aka Holland Dozier Holland. 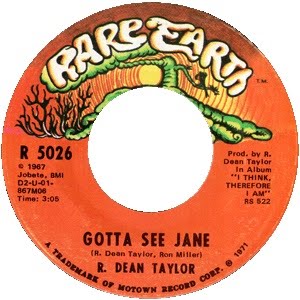 Strangely enough todays song in the advent calendar is “Gotta See Jane” which Taylor wrote with Brian Holland. It reached number 17 in the UK charts in 1968. It has been covered by both the Fall and Golden Earring (enjoy those versions below). The song was released on Motown’s Rare Earth subsidiary in the USA.