OK hold on tight folks here comes todays poptastic triviatastic tidbits to turn down the lights on your otherwise exciting lives. As I type this dispatch I can still see the snow outside. I’ve been to Manchester today, no snow there, but back here in York we’ve got bucket loads. It’s snow joke is it?

before I start though let me thank 1)Vik, 2)Nic and 3)Nick (ain’t that a coincidence!) for being the first to pass comment on the blog. Incidentally did anyone get the “Where’s Wally/ Waldo” piece in yesterdays post?

Anyway sticking like superglue or chewing gum on public transport I will stay with the On This Day theme. So firstly let’s get the birthdays out of the way. Had he not died on 11th September 1987 Lorne Greene (does that sound like a garden treatment to anyone else?) would have been 94. Many of you (well those born in the 50’s or 60’s) may remember from the fabulous, but somewhat dated “Bonanza.” If you don’t remember it just ask your Mum or your Grandma, I bet they will. He also appeared in Peyton Place, Roots and Battlestar Galactica (the 80s version) Anyway Mr Greene was not only an actor but also a singer (well if you listen to the song by clicking it’s title you may think more of a talker than a singer), so successful in fact that he had a US number one single with a song called “Ringo” which as far as I know was not about a drummer. With this hit he became only the second Canadian to have a US number 1.

Lorne even gets a mention in the ‘Donnie Darko’ movie. In the scene where a PTA meeting discusses a proposal to ban graham Greene’s (no relation to Lorne Greene) “The Destructors” When a critic of the ban is asked “Do you even know who Graham Greene is?” she scoffs, “I think we’ve all seen ‘Bonanza’ And finally, Mr Greene’s youngest daughter, Gillian, is married to the film director Sam Raimi.

How many gallons is that titfer?

Another birthday today is Jim Creeggan’s he is the bass player for the ‘Barenaked Ladies’ and is 39 today. The band had a massive hit with the excellent “One Week” in 1999 (no 1 in the US no 5 in the UK) . Check out a version of the song by Morgan Freeman. The band signed their contract with Sire Records at City Hall in a direct snub to then Mayor, June Rowlands, who two years earlier had prevented the band from performing at the citys Nathan Phillips Square because she claimed that their name ‘objectified women’ 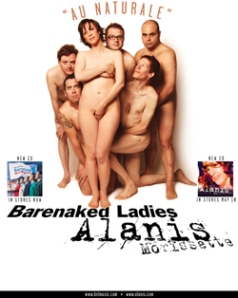 The Barenaked Ladies and a barenaked and objectified Alanis Morrissette

On this day in 1970 the late great (hey the l’s and g’s are back)John Lennon appeared on ‘Top Of The Pops’ performing “Instant Karma” thus becoming the first solo to perform on the show and the first Beatle to appear on it since 1966. This classic song was produced by Phil Spector and also featured George Harrison on guitar. It is also my favourite Lennon song. Check out the dancing and Yoko’s performance too 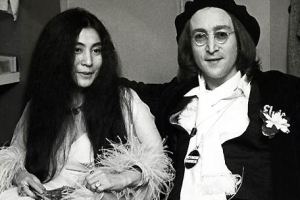 And finally on this day in 2005 a train was named after the late great (back with a vengeance today) Mr Joe Strummer who sadly dies in 2002 aged just 50. The Diesel Train, owned by Cotswold Rail was named in an official ceremony in Bristol. So how best could I bring this back to music? Well obviously, in spite the fact it’s a Mick Jones vocal, it has to be “Train In Vain” by the rather excellent Clash! On a final note and also to say that Lily Allen’s new album is wonderful, Joe Strummer was Lily’s godfather!

A train named after Joe Strummer – how cool is that? Very cool indeed and this picture was taken by Mr Andy Hebden