So on with the show, kicking off with a couple of birthdays. First up for February 25th is that it would have been the 66th birthday of the late great (still there aren’t they those old l’s and g’s) George Harrison the youngest of the Fab Four. Sadly though he succumbed to cancer on 29th November 2001. George wasn’t the first Beatle to release solo material, that was Paul McCartney, however George was the first to release an album on the Beatles Apple label with “Wonderwall Music” the soundtrack to the film ‘Wonderwall’. This also went on to become the title of one of the top Beatles tribute bands Oasis’ songs “Wonderwall”. If anyone has any idea what a Wonderwall is please send your answers on a postcard, or more preferably in the blog comments facility. There may even be a small prize available for the best answer! George was also the first Beatle to have a solo number one with “My Sweet Lord”. The story of the plagiarism legal battle he faced from the writers of the Chiffons “He’s So Fine” over “My Sweet Lord” is well documented so I won’t dwell on that here. However a little known fact about the song is that Harrison originally gave it to Billy Preston and in fact it was lined up as a potential single for Mr Preston. Seen as a more ‘junior’ writer within the Beatles Harrison had also originally given the wonderful “Something” to Joe Cocker before the moptops recorded it for the Abbey Road album.

Incidentally “Something” was written about George’s wife Patti who later went on to marry his friend Eric Clapton. Clapton wrote both “Layla” and “Wonderful Tonight” for Patti. This must make her the only person to have so many classic songs written especially for her surely? In spite of the fact that Patti left George for Eric the guys stayed great friends right up to Harrisons death. 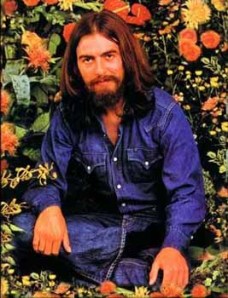 In the 60s George really took Flower Power to extremes

In 1974 Harrison set up his own label ‘Dark Horse’ it’s first signings were Ravi Shankar and the band ‘Splinter’. Apart from Harrison himself the only act to have a hit on ‘Dark Horse’ were Splinter who charted with the song “Costafine Town“. Have a listen to it, I think it’s aged quite well, what do you think? George produced two Splinter albums under the not well disguised name Hari Georgeson. This became the name that the NME used for him throughout the 70s too

Here is George with the criminally underplayed “When We Was Fab”

The last of todays birthdays is that of Stuart “Woody” Wood of the Bay City Rollers, it’s his 52nd birthday. The band had been around for a while before Stuart joined in January 1973, the same time as lead singer Les McKeown joined the group. The band’s rise to the heights of ‘Rollermania’ began in 1974 with “Remember (Sha La La)” and peaked in the UK in 1975 with their two number ones “Bye Bye Baby” and “Give A Little Love”. They also hit the top spot in January 1976 in the US with “Saturday Night”. Most of their sings were either covers or written for them by Bill Martin and Phil Coulter, however in December 1975 they had a hit with “Money Honey” which was written by Stuart Wood and fellow Roller Eric Faulkner

Woody was sure he had requested a mirrored ceiling, but decided he'd have to put up with a mirrored floor instead

On this day in 1963 saw the first release of a Beatles single in the USA when “Please, Please Me” was issued on the Vee Jay label. I would imagine that a copy of this single might be quite valuable, largely because the name of the band was spelled wrong as the Beattles. The boys went on to capture all the top 5 places in the US singles chart for one week in 1964

And (almost) finally for today the Jam signed a £6,000 contract with Polydor Records.The band (Paul Weller, Bruce Foxton and Rick Buckler) came together at school in Surrey and went on to play chart and r & b covers across pubs and working men clubs across Surrey and surrounding area. As punk began to break in 1976 they rode the wave like many others, but were never really a punk band in my opinion, a great band nonetheless. They started to get gigs at the Marquee and the 100 Club in London and in 1976 they auditioned for Terry Slater of EMI and were turned down. Perhaps not on the scale of Decca turning down the Beatles but still a big mistake. Their audition for Polydor’s Chris Parry came about after Chris was urged to see them by one Shane McGowan, then leading the ‘Nipple Erectors’ but later more well known as front man of the Pogues. They were a part of the Clash’s short lived ‘White Riot’ tour in 1976 but left following an argument with the headliners. It took them just 11 days to record their first album on which all the songs were written by Paul Weller who was just 19 at the time. Their first single was the album’s title track “In The City” Click the song title to see the band performing the song at the 100 Club in Oxford Street in 1977. Weller disbanded the group in 1982 to follow a new direction with the Style Council and then later to massive solo success. Breaking a great band up at the height of their success may have seemed like the wrong thing to do at the time, but it certainly never harmed Mr Weller’s career. Buckler and Foxton now tour as what in my opinion are little more than a tribute band ‘From The Jam’ 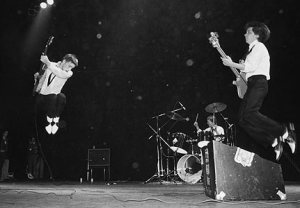 Paul and Bruce practice for their advanced guitar Ninja exams

Catwoman and I saw Paul Weller at the Manchester MEN Arena last year and he was fantastic, he even included a few Jam and Style Council songs in his set. If you haven’t heard his current album ‘22 Dreams‘ shame on you. Go and rectify that issue NOW! In the meantime click on the album title to hear a BBC4 sessions version of the title song

paul steadfastly refused to wear a red nose, even for Comic Relief!

And finally finally, now I really mean finally this time! Here is probably the most infectious and annoying clip I have seen for ages, it’s a cat dancing to the “Peanut Butter, Jelly Song” just play it once and it will stick in your head for hours!

4 Responses to ““I wanna say, I wanna tell you, about the young ideas, but you turn them into fears””