How many of you have seen the new Richard Curtis movie “The Boat That Rocked”? Isn’t it excellent? If you haven’t seen it I’ll forgive you for just a short while as it has only just been released, but report to the headmasters office if you still haven’t seen it by the end of the month.

It’s a comedy set aboard a pirate radio ship in the North Sea in the 60’s. I don’t know about you but I am old enough to remember the heyday of pirate radio stations. Indeed I remember listening to both Radio London and Radio Caroline as a child at home. The film’s station Radio Rock sounds authentic to me. At the time the BBC’s pop music output was tiny at no more than two hours a week. The British government were keen to shut down the pirates, presumably as this would give them more control. At it’s peak it was estimated that more than 20 million people were listening to pirate stations.The government eventually succeeded with introduction of the Marine Offences Act but they clearly understood the value of pirate stations as the BBC launched Radio 1 on 30th September 1967. In fact many of the Radio 1 DJs had previously worked on pirate stations, including Tony Blackburn and my favourite DJ’s Johnnie Walker and John Peel.

Anyway back to the movie. The script is hilarious and the casting is first class. Bill Nighy is truly wonderful as the stations owner. Thick Kevin is a very funny character too. Some of the funniest characters are Philip Seymour Hoffman as the Count, Nick Frost as Doctor Dave and Rhys Ifans as Gavin. Watch out for the ‘chicken’ contest between Doctor Dave and Gavin it’s hilarious. So is the truth or dare scene about flatulence follow through! A special mention certainly goes to Kenneth Brannagh as a government minister too. My favourite character though was probably Angus ‘The Nut’ Nutsford played by Darby Rhys. You may have seen him before as Murray the Manager in ‘Flight Of The Conchords’

The soundtrack is bloody good too. Some excellent 60’s sounds including Procul Harum’s “A Whiter Shade Of Pale”, Martha and the Vandella’s “Dancing In The Street” There is an excellent cover of Lorraine Ellison’s “Stay With Me Baby” (which is one of the 50 songs in my top 10) from Duffy. perhaps the oddest choice of music though is the use of David Bowie’s 1983 number one “Let’s Dance” to close a sixties movie. In a nutshell that is the only thing I didn’t like about the film.

The Boat That Rocked is definitely a feel good movie and has some great laugh out loud moments. Failure to see it is not an option! Check out the film’s official website here. 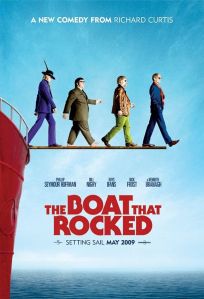 5 Responses to “The Boat That Rocked”