Some of you may know that I travel down south every Monday morning from York on the 6 a.m. train to London. This means that I get up at 5 a.m. Whay am I telling you this in a music blog? Well last Sunday night I went to bed around 11pm and some inconsiderate muppet (apologies to Mr Henson) at the end of the street decided to play what seemed like his entire collection of Shirley Bassey songs at high volume until almost 2 am. In between songs he could be heard discussing, again at great volume, the death of Michael Jackson. Things like “He’s all over the bloody papers and TV, I mean what’s that all about, he’s just a fookin’ pervy freak” Well Mr Noisemaker that may well have been true, but it’s clear that you are a completely inconsiderate bastard. I was going to come and knock on your door that night, but I doubt that you would have heard me. So I opted for a cunning plan. It was me who banged on your door Monday morning at 5.20 am while I was waiting for my taxi. I was disappointed that you didn’t answer, but oh how pleased I was when I looked back as the cab turned the corner to see you stepping out of your door with a very tired and puzzled expression. What would I have given for your door to slam shut behind you at that point. If there is any chance that you read this post, just be aware that I will do the same thing again if you persist in disturbing the neighbourhood in the same way again. You are obviously a Shirley bassey fan, so here is a few snippets of trivia about dame Shirley. Did you know that she is the only person to record more than one James Bond theme? Well it’s true and she actually recorded three; “Goldfinger” from 1963, “Diamonds Are Forever” from 1973 and “Moonraker” from 1979. Incidentally “Moonraker” was written for Johnny Mathis, well it’s your loss Johnny! She became a Dame Of The British Empire (DBE) in 1999. When Dame Shirley appeared at Glastonbury in 2005 the Arctic Monkeys played a cover of “Diamonds Are Forever” in her honour. Her vocals were also sampled by Kanye West on his hit “Diamonds From Sierra Leone” I bet you can’t guess which of her songs he sampled? 😉 She will be 72 in December which makes her old enough to be my Mum. My very own mother was 73 in February this year and in my opinion a certainty to reach triple figures 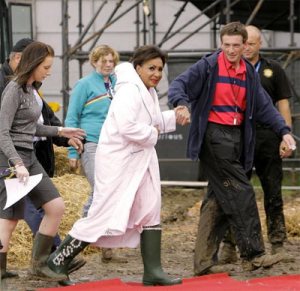 Dame Shirley enters the mud wrestling ring at Glastonbury in 2005

Many of you are aware that my son Luke is in a truly brilliant band called Steal The Smile and if you’re not then you clearly haven’t been reading my posts regularly enough. Anyway Steal The Smile have a new single out tomorrow 1st July. So get yourself over to their MySpace page and buy it and tell them I sent you! It’s called “Rome Was Built To Burn” and they are doing some gigs to promote it, including one at the FaceBar in Reading this Thursday (2nd July). So get yourself down there, you won’t be disappointed! Click here to visit their MySpace page 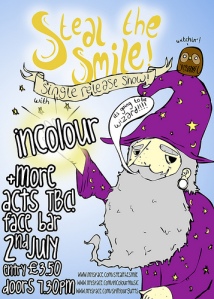 Gig poster for the mighty Steal The Smiles single launch party at the FaceBar in Reading Thursday July 2nd 2009. Be there or be Rhomboid

And finally, let’s get back to the kind of stuff that I published when I first kicked off this here blog back in February. On this day in  1975, 10CC were at No.1 on the UK singles chart with ‘I’m Not In Love’. The instrumental break featured the repeated spoken phrase: ‘Be quiet, big boys don’t cry…’, which resonated with a sixteen year old me and was spoken by Kathy Warren, the receptionist at Strawberry Studios, Stockport, Cheshire where the band recorded the track. Apparently Jonathan King ‘discoverd’ Ten cc and came up with their name, allegedly the average male’s ejaculate adds up to 9cc……… well you can guess the rest. Jonathan also claims to have discovered Genesis and now he is in jail for kiddie fiddling which he denies, so what are we to believe? well good people I’ll leave that up to you!