Happy New Year to all my regular readers and to all of you who have chanced upon my blog by some kind of awful accident. If you are one of the latter feel free to stay, you won’t catch anything, I promise!

My first post of 2010 relates to one of the last big news stories of 2009; the attempted bombing of the plane over Detroit a few days ago. Firstly let me make an apology up front. I know this is a serious matter but for me there is quite a degree of humour in it, also no one was seriously hurt. So if you are offended by even the mildest of sick jokes then please stop reading now. I am often known by my good friend Fraser as a sick puppy, you may tend to agree.

OK so what is the issue here? Well I have a beef with the fact that Richard Reid who attempted to blow up a plane a few years back by concealing explosives in his shoes is now universally as the Shoe Bomber, whilst Umar Farouk Abdulmutallab who concealed explosives in his underpants is being called the Plane Bomber by most of the British Press. He must be known as the Underpants Bomber surely? Is joking about people like this wrong? I don’t think so, indeed the anti Hitler propaganda in Britain during the Second World War focussed on making Hitler in to a figure of fun (who hasn’t heard the “Hitler has only got one ball refrain”?). Let’s not forget that Abdulmutallab was a ‘failed’ suicide bomber who had agreed to blow himself up starting with his wedding tackle. Actually whoever persuaded him to do that did one hell of a job, how many men do you know who would effectively agree to strap explosives so close to their private parts?

Anyway in the event it was a complete balls up or a cock up if you prefer. It was a real bummer and let’s face it the plan was pants. I dread to think how bad the skidmarks on his pants were. I am sure you can come up with plenty more, post them in the comments section.

Another amusing aspect of this whole story for me was the way it was reported initially. Apparently the Underpants Bomber went to the toilet for twenty minutes and then complained of stomach pains shortly after returning to his seat. It was then said that passengers nearby heard a popping noise and then smelt something horrible. I rest my case! 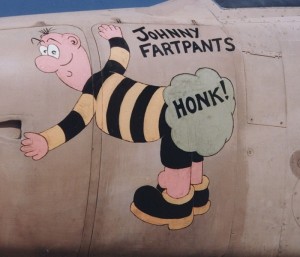 And finally a great YouTube clip from the Singing Butts. I turned 51 today and I have always believed that I would become mature when fart jokes were no longer funny, so I am now able to confirm that as yet I am still not mature 🙂

7 Responses to ““Oh what fun we had, but did it really turn out bad?””