Hello peeps, long time no post, but I am resolving to post more this month. So let’s just see if I can manage it shall we?

Anyway the subject of this post is the film ‘The Strangers’, ok I know it’s not a new movie, but I was out with friends last week and they said that it was the scariest movie they had ever seen. Now for me when someone says that you really have to see it. Don’t you? I went into HMV this week and bought the DVD of the movie, it was on offer for only £7. The first concern I had was that it was just a C15 certificate (for those of you across the pond that means that you must be at least 15 to see it or buy it).

So this afternoon we sat down to watch the film. Personally I thought it was probably the least scary Scary Movie I have ever seen. Even Catwoman wasn’t scared. So to our friends A & G (who shall remain nameless) I have to ask, just how many supposedly scary films have you seen? Overall I thought it was generally a poor movie. Very darkly lit, to the extent of not being able to see properly. The sound recording meant that much of the script appeared mumbled. I wasn’t very impressed and in fact if anyone wants to buy the DVD I’d be happy to sell it for £7 plus postage, but personally I wouldn’t waste your money! 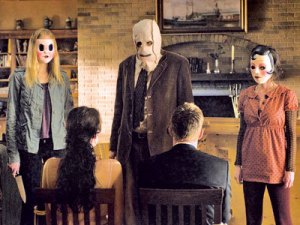 The moment that two members of Slipknot began a revolt over wearing masks (somehow I think I will be taking some crap for this comment!)

There was another moment in my life when someone warned me about a scary film. It was back in 1974 and my Mum showed me a tabloid report of teenagers having killed themselves after seeing ‘The Exorcist’. Her words to me were along the lines of “don’t you dare go and see this film” It was an X Certificate (the 70s version of todays C18) and I was underage at just 15, but that had never stopped me before. So I conferred with a couple of mates who had been given exactly the same warning from their parents and obviously when we realised we’d all been warned our simple curiosity meant that we simply had to see it. We did the usual of sending the tallest in the group to buy a ticket as he looked the oldest. He went into the theatre and opened the emergency exit briefly to allow us other two in. (We were such criminals weren’t we?) The film was more scary than ‘The Strangers’ by a long way, although no film has yet seriously scared me ever! It was quite a good movie, although having seen it more recently I think it looks dated now. For me the funniest moment of that cinema visit was the scene where the two priests are trying to use religious faith and power to bring a levitating Linda Blair back onto the bed. They were chanting something like “The power of Christ compels you” over and over. Some wag at the back of the theatre shouted “All together now!” Well we just fell about and that probably turned many other moments in the film into more comedic moments than they actually were.

As I have said before this is a music blog so I will finish with some songs that concern strangers;

“Strangers When We Meet” – David Bowie. Originally found on the soundtrack to the excellent Buddha Of Suburbia a TV adaptation of Hanif Kureshi’s book. Also in my opinion one of the Dame’s (an NME name for Bowie in the 70s and 80s) finest singles of the 90s

“Strangers In The Night” – Frank Sinatra. One of Ole’ Blue Eye’s best loved songs. The NME sometimes referred to Bryan Ferry back in the 70s as Frank Sinister after he covered a Sinatra song. They also rather amusingly referred to him as Byron Ferrari. Speaking of Frank, which we were; “To Do Is To Be” – Socrates, “To Be Is To Do” = Sartre, “DoBeDoBeDo” – Sinatra

“People Are Strange” – The Doors. Jim Morrison once said “Film spectators are quiet vampires” although in the case of The Strangers they wouldn’t just be quiet they would be asleep!

“Goodbye Stranger” – Supertramp. This song was included on the bands wonderful ‘Breakfast In America’ album from 1979. The song was also included on the 1999 soundtrack to the film ‘Magnolia’ which also featured “The Logical Song” and a number of songs from Aimee Mann

“Mama Tried” – Merle Haggard. He was a favourite of my Mum, but why is it included here I can hear you ask? Well simply because it was used in ‘The Strangers’ and it’s also a very good song