So here we are on another UK Public Holiday weekend and guess what? It’s raining. Someone once said to me that there is an easy way to tell when it’s summer in the UK. Do you know how? Well it’s quite simple really, the rain is warm! So here I am stuck indoors so I thought I’d put together a slightly random post that captures a lot of the stuff I have been meaning to blog about for a while, so here goes. 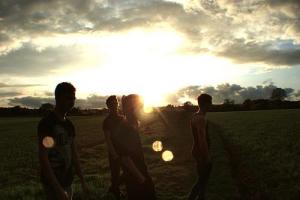 Firstly way back on the 13th May I finally got to see my son Luke play a gig with his band Steal The Smile. They were the second band on that night in the FaceBar at Reading. The band on before them were, and I’m being nice here, in need of an awful lot more practice. Apologies to the bands that followed, but we left for some scoff at TGI Fridays! Steal The Smile played a great six song set which included some of their older and newer stuff along with the obligatory Blink 182 cover. I can tell you that all the boys in the band are looking forward to seeing Blink at the Reading Festival in August. It was a real pity that Steal The Smile were once again badly let down by a promoter in that they had to hang around for three hours for a sound check that never actually materialised and by the time they played there were nowhere near as many people as there could have been. The band wasn’t paid for this gig, but I bet the promoter was! What is it with promoters, and I use the term loosely here, who simply book a venue and some bands and do bugger all else? Is it a stupid assumption that promoters ought to promote? I think not! So if there are any good promoters out there (i.e those with brain cells that at least run into double figures) then get in touch with the boys and book them! You can find them on Facebook and MySpace. Keep visiting too, as there is a revamp being lined up and possibly a lot of new stuff! 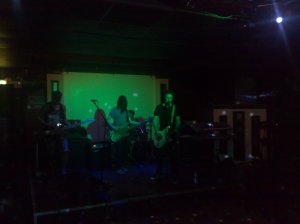 There were a couple of quite amusing moments during their set. Firstly the sound guy was trying to speak to them over the sound of the music and clearly couldn’t make himself heard. It did make me wonder how much he actually knew about sound! So finally Luke just gave the instruction “Articulate” like a rock n roll Dalek, needless to say there was still no response from Mr Sound. The other part was just before the final song when Luke said “This is the point in the show where I usually tell the audience how beautiful they are. But with a large part of the audience being my Dad it seemed a bit strange” Johnny then made a point of telling me that he thought I was beautiful, hmmmmm I worry about the drummer! Finally on Steal The Smile for now, it’s not too late to get hold of an exclusive free song from them, just click here for  a previous post of mine to get your mitts on it!

Next up Glastonbury has lost U2 this year thanks to Mr Hewson’s back problems, which were apparently quite serious. Anyway there is a little silver lining in that their replacement will be the Gorillaz. In their current incarnation the Gorillaz contain not one, but two, former members of the best band ever; the Clash! yes Mick Jones and Paul Simonon are both in the touring band and bizarrely wearing sailors hats as part of the new album Plastic Beach’s nautical theme. I think I may have to get a hold of some tickets for their tour later this year. Read the BBC article on the revised Glasto line up here. Below you can watch the video for the first single from Plastic Beach, it’s called “Stylo” and features Damon Albarn, Mos Def and Bobby Womack

On May 24th there was the news of the tragic death of Slipknot bassist Paul Gray aged just 38. I have taken some stick from many Slipknot fans in the past for using an incorrect picture of them without masks, but whilst that has been a bit of fun and banter I am sure all fans of the band are pretty upset and hurt by his death. To lose a music hero is not pleasant, I know how I felt on hearing about the death of John Lennon, Bob Marley and Joe Strummer. So my sympathies go to Paul Gray’s friends and family and to all Slipknot fans around the world. In his memory here are the band with the video for “Psychosocial”

Yesterday saw the sad news that Gary Coleman the diminutive star of the US sitcom ‘Diffr’nt Strokes has died. He had kidney problems all his life which meant he never grew above 4 feet 8 inches. His most famous catch phrase from the show was “What you talking about Willis?” Willis being his older brother in the show. Hed was clearly popular in the music fraternity too as the testimonials on the NME report of his death show. Kind words from Blink 182, Janet Jackson and Katy Perry

And finally for this post, have you seen the new Miike Snow video, for his song ‘The Rabbit’? It’s really strange. It has a bearded kid and a re-enactment of a 2 Live Crew album cover. Click here to see it. Let me know what you think of it