I have a small selection of oddities for you in this post. Starting with the Arctic Monkeys, no I’m not suggesting that the Monkeys are oddities, but a funny little story about what rude boys they are! Apparently their new album will suffer the indignity of having a sticker placed over its title when it goes on sale in a large US supermarket chain. Not because it has nudity, pornography, swearing or anything like that on the cover, but because the title is said to be very suggestive. I don’t agree at all. So what is that offending title? Why it’s a phrase I have often used myself. It’s ‘Suck It And See’ Now I can hear all of you with an honours degree in double entendre sniggering, but frankly what’s the point in stickering (stop sniggering again ok) that? I thought it was pretty stupid when a pretty tasteful naked girl on the cover of the first Darkness album was covered with a sticker in US supermarkets. But the funniest for me was that the todgers on the classic statues on the cover of the Dame’s second Tin Machine album were removed for the US supermarkets. What a pathetic bunch of arseholes! Tipper Gore this is your legacy! 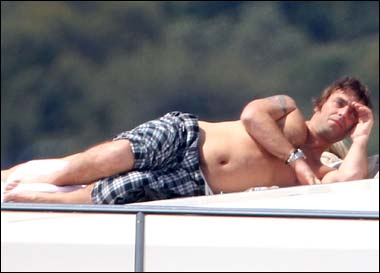 Now for some Gallagher brother news. It would appear that Liam Gallagher is not a big fan of Robert Zimmerman aka Bob Dylan. Liam likes Dylan’s “Lay Lady Lay” but thinks that Bob is a ‘bit of a miserable c*nt’. He also has a dig at 60s and 70s bands that reform to rake in festival money with greatest hits sets. read what he had to say by clicking here for the NME site. In another piece of Gallagher news it appears that Noel and Liam’s Mum is ready to bang their heads together. She says that the only way she expects Liam to miss Noel’s forthcoming nuptials is if both his legs are broken. If I were Liam I’d be afraid, I’d be very afraid. Read about that in the NME as well by clicking here. 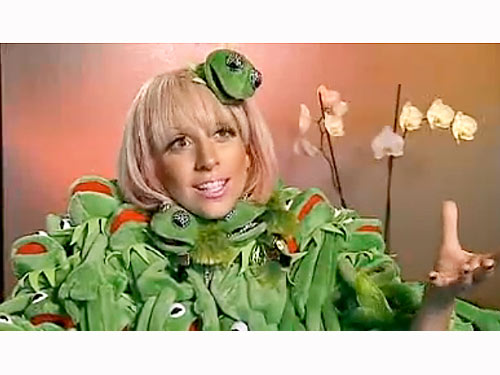 So tell us Gaga, how many Muppets were harmed or killed in the making of this outfit?

It appears that Amazon have had one of the biggest loss leader products in recent years. They have been charging just 99 cents for the download of the new Lady Gaga album ‘Born This Way’, but they have been paying her record label 9 dollars per album downloaded! It is estimated that in about a week they have lost around 3 million dollars. Now is that just pure waste or some kind of reverse greed? Click here to read the story.

And finally, Catwoman and I went to see the new Marvel movie Friday evening; ‘X Men: First Class‘ I won’t be doing a full review as it’s not really a music related movie. But it is an excellent film and for me one of the best Marvel adaptations so far, go and see it if you get the chance. But there is a small music link as the song that is played over the closing credits is the new Take That single “Love Love”. In spite of the fact that Robbie is involved and regular readers will know I really don’t like his stuff, I sadly really like this song. Do I need therapy?

One Response to ““Why wait any longer for the world to begin, you can have your cake and eat it too””