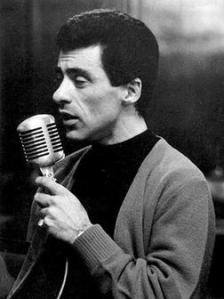 We’re easing down that Christmas road pretty fast now, it’s December 22nd and we’re at the letter V on my ABC of Motown Advent Calendar. I have a confession to make before I tell you what the song is. It doesn’t begin with V, it was so difficult to find a V song. So for today I have opted for an artist whose surname starts with a V. It is the one and only Frankie Valli and the Four Seasons with the Northern Soul classic, “The Night”

In 1970 the group signed to Motown subsidiary label Mowest and the single was originally released in 1971 in the UK with no success it was never issued in the US. When it was re-released in the UK in 1975 following a lot of interest in Northern Soul clubs it reached number 7 in the UK charts.

When the band left Motown in 1974 Frankie Valli wanted to buy the master tapes of everything they had recorded for the label. However when he heard the price he decided to buy just one song for $4,000. That song was “My Eyes Adored You” which Valli took to Private Stock records who wanted to release it as a Frankie Valli solo single. They did and it became a massive hit reaching number one on the US Billboard charts and number 5 in the UK.

I also found a couple of strange covers while looking for this song; firstly Pulp (sorry Jarvis it really isn’t very good mate) then Lene Lovich (a little weird) and finally Soft Cell (a faithful rendition). I prefer the original to all of these though. How about you?