Filed under: Christmas,Trivia — justwilliam1959 @ 1:10 am
Tags: Adam and the Ants, Advent Calendar, Ambrose Slade, Christmas, Coronation Street, Coz I Luv You, Cum On Feel The Noize, Darling Be Home Soon, Dave Hill, Don Powell, Everyday, Far Far Away, Get Down And Get With It, Gudbuy To Jane, Hear Me Calling, How Does It Feel, I Won't Let It 'Appen Again, In For A Penny, Jim Lea, Kill 'Em At The Hot Club Tonite, Let's Call It Quits, Look Wot You Dun, Mama Weer All Crazee Now, Marco Pironni, Merry Xmas Everybody, My Oh My, N Betweens, Nobody's Fools, Noddy Holder, Old New borrowed And Blue, Pouk Hill, Radio Wall Of Sound, Reading Festival, Reading Festival 1980, Run Runaway, Skweeze Me Pleeze Me, Slade, Sladest, Slayed, Super Yob Guitar, Take Me Bak 'Ome, Thanks For The Memory, The Bangin' Man, The Shape Of Things To Come, We'll Bring The House Down, Wild Winds Are Blowing 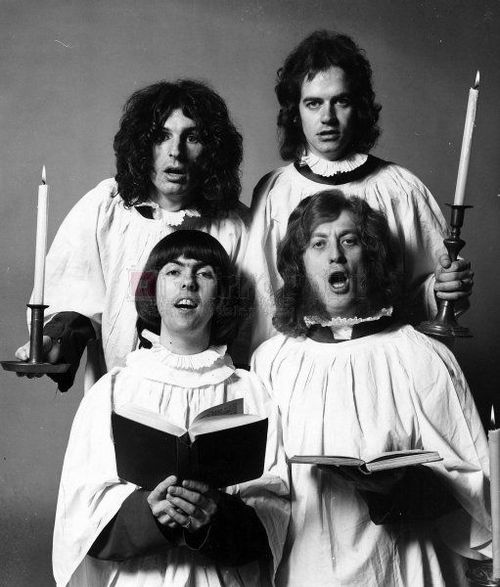 How excited are you now? Less than a week to the big day. Obviously if you are a turkey and you are reading this I do appreciate your lack of excitement. However if you are an excited turkey then there is no easy way to tell you, but you’re stupid! it is December 19th and day 19 of this years advent calendar blog posts. We have now reached the letter ‘S’ in the ABC of British bands. If I were to tell you that you’ll even get a Christmas song included today would it help you guess who the band is? Well it’s Slade! 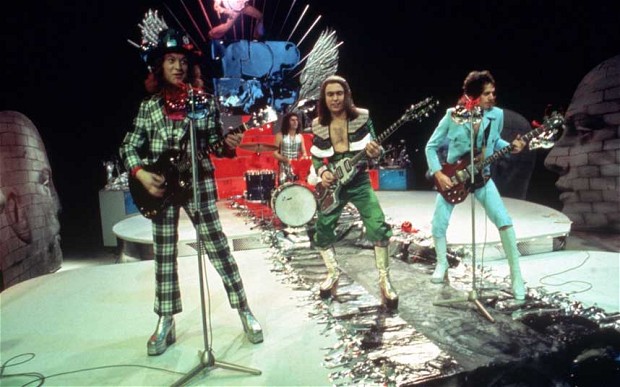 The band all hail from the Black Country in the UK’s West Midlands coming from Wolverhampton and Walsall. In the 60s drummer Don Powell and guitarist Dave Hill were in a band called the ‘N Betweens. They met Noddy Holder while travelling to gigs and invited him to join as guitarist and vocalist. He agreed at the second time of asking and eventually joined around the same time as bass player Jim Lea. That was in 1966 and the band became Ambrose Slade in 1969. It wasn’t long after that (later in 1969) that they became Slade. their massive success followed soon after. 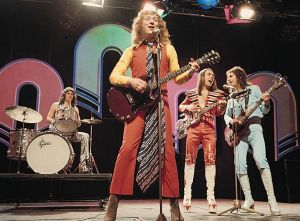 “Get Down And Get With It” was their first UK top 20 hit reaching number 14 in 1971. Shortly after that they had the first of their six UK number one singles with “Coz I Luv You“. That song started a run of 12 consecutive UK top 5 hits running from 1971 to 1974. They also reached the top of the Irish charts six times. Their 1983 song “My Oh My” might only have hit number 2 in the UK but it went all the way to the top in Norway and Sweden. sadly they never really made it big in the USA. Whilst many people may have seen Slade as a singles band they also climbed to the top of the UK album charts twice; with ‘Slayed’ in 1972 and the with ‘Old, New, Borrowed And Blue‘ in 1974. ‘Sladest’ a compilation album of their biggest hits to date also went to number one in the UK in 1973. 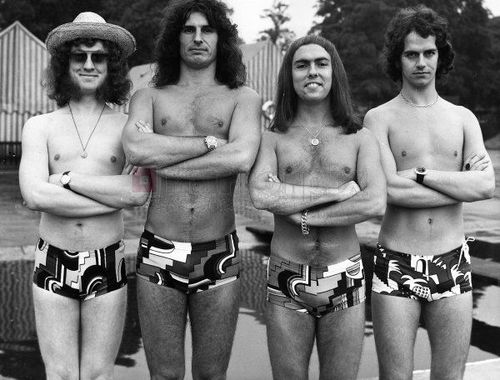 Most of Slade’s biggest hits were written by Jim Lea and Noddy Holder. Usually Jim provided the melody with Noddy contributing the lyrics. Dave Hill’s Super Yob guitar is now owned by Marco Pirroni off of Adams and the Ants. Perhaps because of his early days as a keen amateur boxer it was Don Powell who took the hat round after early Slade gigs. In December 2000 Noddy Holder made a brief appearance in long-running UK soap opera Coronation Street. He played a character called Stan who was there to replace the cobbles in the street. OK that’s enough trivia and stuff now it’s time to enjoy a pile of Slade smashes!