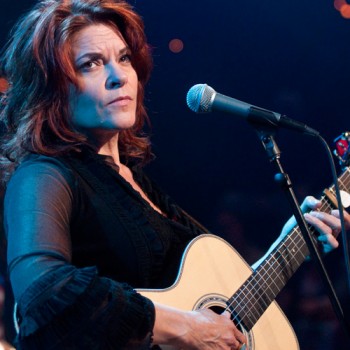 In my teenage years I would never listen to country music of any kind. Largely because my Mum And Dad loved it so in my youthful mind it became uncool. However as I have got older I have grown to love much country music; Willie Nelson, Hank Williams, Conway Twitty, Loretta Lynn, Tammy Wynette, George Jones, Waylon Jennings and Johnny Cash among many others. But my favourite country artist right now, although it’s fair to say that her songs transcend the genre, is Roseanne Cash. Actually forget the genre comment she is simply one of my favourite singers. I fell in love with her music after hearing the ‘Black Cadillac’ album in 2006. She is an incredibly talented songwriter and she also has an amazing voice.

The show at the Brudenell on Tuesday night was a purely acoustic set which she performed with her supremely talented husband John Leventhal. They both had a great rapport with the audience many of whom have seen Roseanne Cash play live countless times. She mainly sang songs from her wonderfully story filled current album ‘The River And The Thread’. That LP won three Grammys earlier this year. She also had a great story to tell about the origins of the songs from that album too. Notably how the beautiful and melancholy “When The Master Calls The Roll” came to be written. Her son had done a school project on the American Civil War. On the Civil War database they found photographs of two of the Cash family. There are not many pictures on that database and the Cash family had ancestors on both sides of the conflict.

She sang a really moving version of “The Sunken Lands” which is my favourite song from that album. Along with “A Feather’s Not A Bird” and “The Long Way Home”. She played a few older songs, including a couple from ‘Black Cadillac’. There were also a selection of tunes from her album of covers of songs that her father Johnny kept on a list of 100 songs that where in his opinion pretty much all the songs you’d ever need to know. In my opinion that album, ‘The List’, is perhaps one of the finest covers albums ever recorded. She played “Girl From The North Country“, “Heartaches By The Number” and “Sea Of Heartbreak”. John Leventhal took over the vocal support role provided by Bruce Springsteen on the album.

Roseanne and John are clearly very happy together and their understanding of each other is clear. They both come across as very real, very humble and very human. They were also clearly having fun on stage. I will definitely go and see another Roseanne Cash show in the future. Catwoman and I enjoyed this show immensely. I should also mention the marvellous support act Ags Connolly. He comes from near Oxford and his album was recorded in Scotland but it really does have a brilliantly authentic country sound.

Here comes the usual public service announcement. None of the pictures or clips in this post were taken or filmed by me.