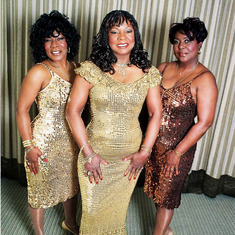 I last saw Martha Reeves many years ago, maybe late 70s or early 80s I guess. Probably in some cheesy nightclub in Luton or Dunstable. No doubt it was accompanied by chicken in a basket. While my memory of that night is not too clear I do recall that her singing voice was superb. So the opportunity to see her again in my adopted home town was not one that I was going to miss, especially at Fibbers which is a fantastic little venue. But before I talk about the magnificent Miss Martha Reeves let me tell you about the very talented support act. Eve Simpson is a singer songwriter from Newcastle with a collection of heartfelt, heartwarming and powerful songs. She sang them beautifully accompanied just by her acoustic guitar. I was captivated by this exceptionally bright performer. She put on a great show in spite of some of the audience being more interested in talking throughout her set. I always find it strange when people ignore a support act, but hey to each their own. Those talkers missed a treat! I was lucky enough to speak to Eve and her Mum and they are both lovely ladies. I bought a copy of Eve’s EP ‘Shelter’ and I have played it at least a dozen times already. You really need to check out Eve.

Anyway so the main event is clearly what everyone was here for Martha Reeves and the Vandellas. Martha was making music from around the time that I was born and had their first chart action when I was still only four years old. If I have half the energy that Martha has when I am 75 I will be ecstatic. She was on stage for around 90 minutes, with the Vandellas who are now made up of two of her sisters; Lois and Delphine Reeves. The band was a really tight and skilled unit too. Martha really knows how to work an audience and her between song chat was highly entertaining.

All the classic Motown hits were on show including; “Come And Get These Memories” and “Nowhere To Run”. My particular highlight was a stunning version of my favourite Martha and the Vandellas song, “(Love Is Like A) Heatwave”. But “Dancing In The Street” was a very close second. To hear Martha sing that song live really exposes how embarrassing the Bowie and Jagger version was in 1985. The audience pretty much danced the whole night long, I certainly did, spending most of my time right in front of the stage. The song that brought out the best ‘dance like nobody is watching’ moment in me was definitely “Jimmy Mack” and their superb run through of the Jackie Wilson classic “Higher And Higher”. Their version of Marvin Gaye’s gorgeous “What’s Going On” was beautiful in its extended jazz jam style too. The most emotional point was, I think, the stunning and soulful “No One There” which was written by Johnny Bristol.

At the end of the show Martha, Lois and Delphine came out to meet the fans and sign some photographs and CDs. Obviously I wasn’t going to miss that. I had them all sign the two CDs and group picture that I bought. I was also able to have a little chat with Martha herself. I thanked her for the show and told her how impressed I was that she was drinking a pint of Guinness. I also told her that I have always felt that her version of Van Morrison‘s “Wild Night” is in my opinion the best ever cover of a Van Morrison song. She gave me a big smile for that! I for one will definitely being going to see Martha the next time she tours in the UK and I suggest that you do the same. You will not be disappointed!