How can you go wrong with a ticket price of £5 (£7 on the door) for four bands? Well you can’t really can you? At Fibbers too. This was another gig recommended to me by the talented Mr Simon Pattinson, pity our poor communication meant he didn’t make it though because it was a proper pedal to the metal, balls to the wall rock night.

Up first were Violet Contours with their jangly indie pop that carries a great northern edge. At times they channel Kings Of Leon and Orange Juice. “Electric Bodies” is a phenomenal début release. It is rich, vibrant and hangs around in your brain much longer than lesser songs. 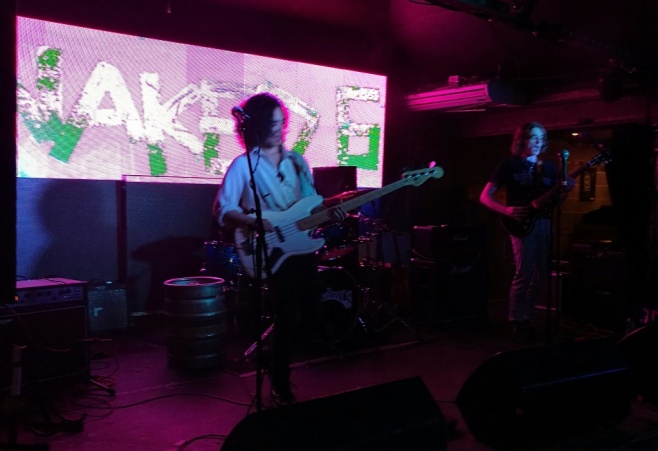 Now Naked 6 is a band that I first saw a few months ago at the Crescent in York and I thought they were darned good then. I bought my ticket from the band’s bass player extraordinaire Caleb tonight. What a top bloke! Do you like your rock hard? Do you like some funk in your rock? Do you love a band that knows how to rock out and I mean really rock out? Well look no further than the mighty, magnificent music machine that is Naked 6. This is the 21st century Led Zep. How the fuck do three people make so much noise? They made my ears bleed, but in the best possible way. To top it all off I swear that their very metal version of “I Wanna Be Like You” is like nothing that you have ever heard before.

The Howl and the Hum

I must confess that I have never come across the Howl and the Hum before. What are they like? Think Jeff Buckley, Radiohead, the Doors without Manzarek and maybe the Villagers then you are part way to understanding this complex band with simple songs that sound like stunning and sharp icicles of left-field rock. They know how to build a song from a soft, laid back start into a pile driving crescendo. I reckon this lot could be the house band in David Lynch‘s ‘Twin Peaks‘.

Now for the main attraction, how on earth could the Strawberries follow such a powerful line up? With aplomb, power, guts, swagger and some pretty tasty tunes. They are clearly one of the finest bands from Leeds at the moment. I’m gutted that I missed them on the Jack Rocks stage at the Leeds Festival last year, let’s hope they will be there again this year. They draw on the most psychedelic aspects of Primal Scream and they take the audience by the scruff of their dirty necks and slap them into submission with some amazing tunes. “Caramel Eyes” was a particular favourite of mine. This is the band that Oasis might have become had they not blown it after the first two albums. I bought the Strawberries EP with its individually hand crafted cover and it is a super charged 15 minutes from a band with a great future.

You really need to get out and catch any of these four bands playing live. You will not be disappointed whichever one you choose!

A public service announcement – all the pictures are from my nifty little Chinese phone and the videos are all courtesy of YouTube.