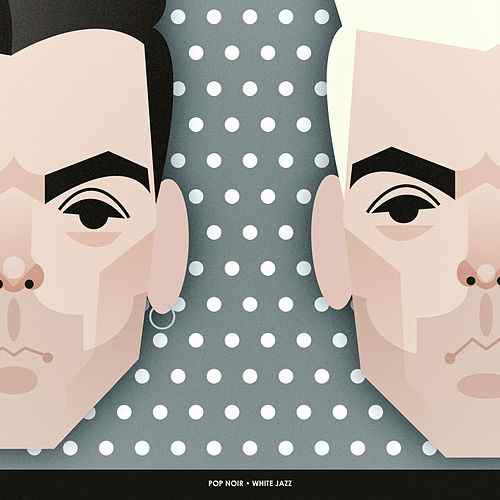 This is the second in a series of posts about artists that are completely new to the With Just A Hint Of Mayhem Blog. Just because we have only just heard of them doesn’t mean they are new to you. But whether they are or not we would love to hear your thoughts. The series is called Mayhem Virgins. Incidentally With Just A Hint Of Mayhem is now available on FaceBook and Twitter.

This time it is the turn of the delightfully chilled Pop Noir who we discovered via the Twitter-verse. Pop Noir were formed in Los Angeles in 2004 by the then 16 year old British born twins Joe and Luke McGarry. they are the offspring of cartoonist and illustrator Steve McGarry who has designed record sleeves for iconic acts such as Joy Division and John Cooper Clarke. So not only have they been steeped in music history they have also inherited the artistic streak from their father as both Luke and Joe are designers and illustrators themselves. They released their debut single “DIY” in 2009 and they have released many songs since then. Their latest single, “White Jazz” is available now and has a rather wonderful video filmed in Tokyo. It is a sublime slice of epic electro chill out with an infectious feel good vibe. The band have a really chilled out electro sound which for me is reminiscent of the Beloved and the Groove Corporation. Have you heard of Pop Noir before or not? Either way we would love to hear what you think of them!

Public Service Announcement:  This blog post is not linked in any way to any company associated with Richard Branson’s Virgin empire or the sweater wearing tycoon personally!