The phrase ‘Post-Rock’ was according to most sources first used by music critic Simon Reynolds in his review of Bark Psychosis’ album ‘Hex’, published in Mojo magazine in 1994.  He later expanded on that by saying he used the term to describe music “using rock instrumentation for non-rock purposes, using guitars as facilitators of timbre and textures rather than riffs and power chords”. Apparently an American music critic used the term to describe Tod Rundgren, although the context was not the same. In my experience perhaps 65daysofstatic or even Fuck Buttons might fit into the Post-Rock genre. I should point out that I am not an expert in the genre, however I was given the opportunity to review the new album from Parisian Post-Rock outfit Lost In Kiev and it really piqued my interest. Generally this style of  music is largely instrumental but uses samples of sound taken from TV and film. However Lost In Kiev take that to the next level by recording all their own spoken word samples. 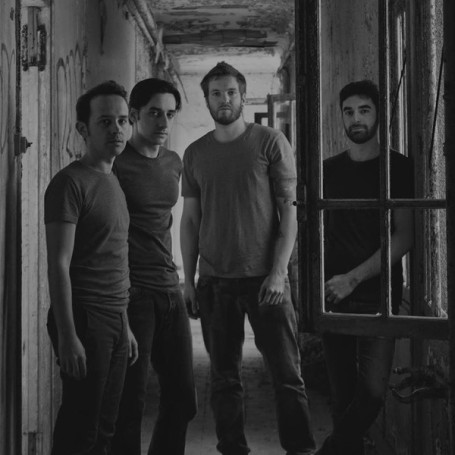 The soundscapes throughout ‘Persona’ are immense and majestic and using your imagination you can immerse yourself into a skyscraping tale of the future and Artificial Intelligence. Sometimes I find purely instrumental bands, Lost In Kiev have no vocalist, can become a little samey and predictable. But Lost In Kiev step way beyond that with this record, the music is hypnotic, thunderously powerful and very different to almost anything that I have heard in the last couple of years. There are no classic guitar riffs, they are simply not needed. Although “Mindfiles” has what sounds like a synthesised metronomic guitar riff motif peppered throughout. The massed choir of synths and the at times almost tribal drumming overpower the listener and take you on an intricate journey. In their live sets the band accompany all their music with specially produced videos. I haven’t experienced them live yet but I need to now. This album is a stand alone masterpiece from a band at their peak even without the benefit of film.

If you knew nothing of Post-Rock you might classify this album as Prog and no doubt that cap might fit too. The tracks all clock in at less than six minutes each apart from “Thumos” and album closer “Mecasocialis”. After a couple of listens I think the aforementioned “Mindfiles” is my favourite track on this collection, although the competition is huge. Can an instrumental album ooze and pulse with emotional range? Well ‘Persona’ certainly does by evoking love and anger and every shade in between. The band’s guitarist Maxime Ingrand when talking about the album said “The main challenge with this record was how to write more direct and shorter post rock tracks with the same intensity as our previous, longer compositions, and finding the right balance between traditional post rock, the addition of synths and machines and the texts for the film“. Have they acheived that? Most definitely with the music and I suspect that they probably have with the film element too, although I am yet to see that personally. ‘Persona’ is out now on Pelagic Records. Click here to check it out on Spotify.