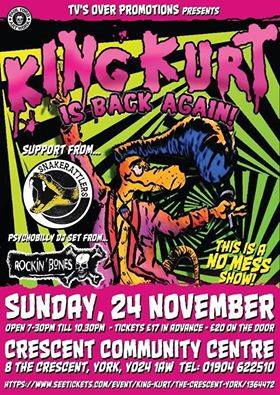 The 80s mental madcaps King Kurt are back together again! Originally formed in 1981 the band split up in 1988. There have been a few sporadic reformations since then, this one is quite special as it includes four original members. Do these Psychobilly monsters still have what it takes? You will need to read on to find out as there is first the little matter of a rather good support act to talk about. That support act was one of York’s best-known bands, the Snakerattlers, a psychobilly, garage, trash, thrash power duo with Naomi on drums and vocals and Dan on vocals and Link Wray style guitar duties. It is quite a while since I last saw them and believe me they have gotten so much better in that time. They are truly a live force of nature the way they attack their songs. Dan uses his sometimes comedic, often horror style of gurning to draw the audience in and frankly we were drawn in quite easily at this show. They have a couple of albums under their rattlesnake buckled belts and we heard a great selection from both. They have a great set of band themed songs too; “Do The Rattle Rock”, “Snake Rattle Rock, Snake Rattle Roll” to name just a couple. Dan and Naomi played a blistering set that had us bouncing around from the off. Highlights for me were “She’s Strange” which Dan dedicated to Naomi and a mountainous “All Heads Will Roll”. Another incredibly talented band from the fine city of York, my adopted home! 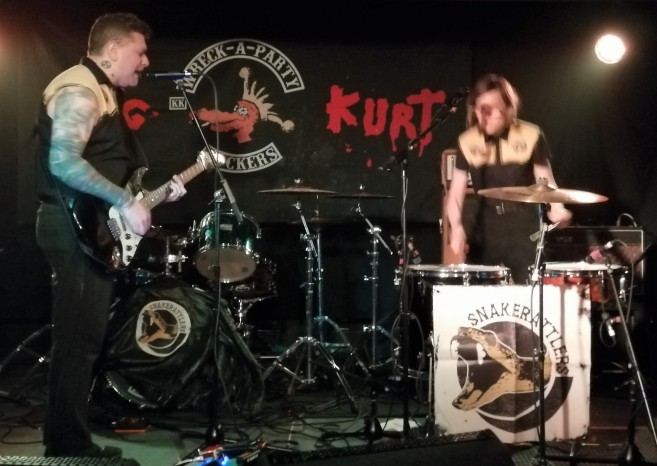 Back in the early 80s after original King Kurt member, Jef left the band they decided to give him a proper send-off by turning him into a cake by covering him in flour, eggs and shaving foam. The legendary ‘messy’ gigs that followed were a result of fans doing something similar at every gig. Nowadays all King Kurt gigs are clean unless stated otherwise. My good friend Ian and I were warned as we entered the Crescent that this was a clean gig. A small part of me was disappointed, however, I am glad that I didn’t go home covered in crap! The band took to the stage in a uniform of red onesies, the type with the button flap on the arse. Are there any other bands that would dare to play a gig dressed like that? Probably, but definitely not many. King Kurt is usually billed as a psychobilly band and while that is certainly a part of what they are, I believe that they are so much more. Their songs and performance also have power pop, punk, glam rock (in sound if not in appearance) and a very British humour that has its roots in the like of the Bonzo Dog Doo-Dah Band. Smeg’s vocals were first class and Thwack’s guitar rocked like a bastard. All the big songs were there in a set that felt like it was over way too soon, but that is because time flies when you are having so much fun, right? All the hits and favourites were there and my particular highlights were “Destination Zululand” and “Do The Rat”. Sometimes I see bands reform and think to myself, why did you bother, but with King Kurt all I have to say is welcome back and what took you so long?

All the photos apart from the gig flyer were taken on my cheap android phone. The videos were all found on YouTube, if one of them is yours and you would like a credit or for me to remove it please let me know.