The Big Boss Caine Annual All-Star Festive Fundraiser has traditionally been held at the now sadly demised Fibbers in York, but for 2019 and hopefully many years to come it has relocated to the rather fabulous Fulford Arms. A huge thank you to Dan Lucas for putting this on and to everyone at the Fulford Arms who worked tirelessly all night and of course to all the bands taking part. This is the first of these events that I have managed to get along to and I am so glad that I did. This year’s charity was Kitchen for Everyone, York. who provide an amazing service, feeding the homeless and vulnerable in York, and there was also a collection of food and clothing on the night for those in need locally, as part of We Shall Overcome. The total raised at the gig was £522 at handover though there I believe there will be more to add to that from poster sales and whatnot. There was also a Land Rover fully laden with clothes, sleeping bags, hats, gloves, socks, dried food, sanitary/bathroom products, and mucho love! Dan Lucas will be continuing to collect each week at Busk @ Dusk if you fancy getting down there on a Sunday night. The gig was the day after the damaging and disastrous UK General Election which gives Britain its most far-right government in history. I was feeling pretty low about that and I drank an awful lot of wine that night. So before I tell you about the show can I just say sorry to anyone that I might have bored the pants off/ annoyed/ never stopped talking to/ leaned on/ offended (delete as appropriate) and I really hope it wasn’t the latter!

A massive shout and thanks to the extremely talented Kai West for producing such an incredible poster. I never got around to buying one of the limited edition copies on sale on the night, so if there are any left then I am still interested. Unfortunately the first of the six bands on the bill, French Exits, couldn’t make it. So the event was kicked off in great style by Percy. A York band that regular readers of With Just A Hint Of Mayhem will have noticed a few times before. They are a very left-field prog-punk combo. They are so different and ‘out there’ that they have the power to bring John Peel back to life; Percy would make an amazing collection of classic Peel sessions. The new songs that they showcased on the night are immense and bubble over with venom and anger, especially future classic tune in the making, “Will Of The People”. If you like Magazine, the Fall or even Half Man Half Biscuit you need to check Percy out. But comparisons aside Percy are very much original, so what the hell, check them out whoever you are a fan of they are well worth it! Also a big shout for Percy for being the first band of the evening to shout “Fuck The Tories”, they weren’t the last.

Cowgirl, a great band that I saw for the first time back in January. If the Stooges had been fronted by Lou Reed and Jonathan Richman then Cowgirl would be the result. Their bluesy, riff-laden, psychedelic, feedback fuelled scuzzy garage rock is at times evocative of the Black Rebel Motorcycle Club and the Detroit Cobras. Bizarrely, maybe through some nicely utilised feedback, I was also taken back to 1974 and the first time that I ever heard David Bowie’s ‘Diamond Dogs’ album via a late-night end to end playthrough on John Peel’s show a week before it’s release. Listening to that in the dark on headphones scared the shit out of me. I believe that Cowgirl might have the same effect in a darkened room. Someone needs to give them the opportunity to soundtrack a British horror film along the lines of ‘Eden Lake’. 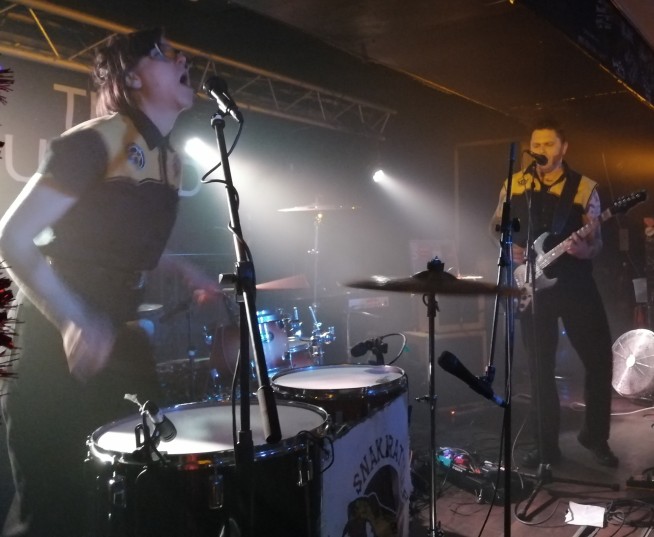 The Snakerattlers have had a great year; an exhilarating new album, ‘All Heads Will Roll’ and this was their 71st gig of the year. They are now a live force to be reckoned with, a truly amazing live band. Dan’s stage presence is spot on and how the fuck does Naomi make so much noise from such a small drum kit? Their towering psychobilly based sound is ecstatic and energising. The now expected crowd incursions from singer-guitarist Dan Gott are special, not just for his Dick Dalesque guitar work but for his expert gurning and an evil stare that would fit neatly into the British Horror film that I want Cowgirl to soundtrack. Stuck for a Christmas present for your Gran? Get here the Snakerattlers album, it will keep her alive for many more years! 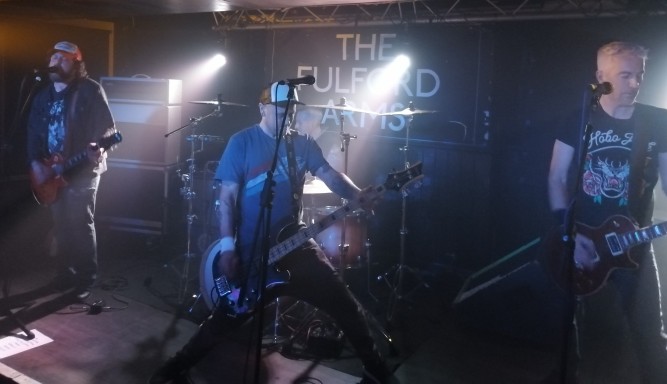 After more than 20 years one of York’s finest punk bands is back together. Ladies and Gentlemen, I am talking about the Nosedivers. They come on like the snotty young brothers of the Clash with the swagger and poise of the Ramones. Dan Lucas’ vocals are rich, deep and sharp and very different from his Boss Caine work. The Nosedivers energy is off the scale and their anger is channeled into some fiery political comment. Changing the chorus of one song rather cleverly and topically to “Fuck the Tories”. The mountainous riffs and piledriving songs are carved from a punk mountain, on the scale of Mount Olympus but built from pure punk vibes. We need this band to stick around a while longer and I hope that they do. But even if they don’t it was a major blast having them back even for a short while.

The headliners and the perfect band to close this scintillating salmagundi of a gig was York’s very own Bull. If you know this band you will bloody love them. If you don’t know them yet then what are you waiting for, get on it now! They take the best of the Pixies, the Strokes, the heavier side of R.E.M, the retrospection of Elvis Costello and the pop-rock sensibility of Kurt Cobain and roll it into that unique Bull sound. Bull are supremely talented musicians and they owned the stage and deserved this prestigious headline slot. They are clearly on top of their game and I get the impression that they are still some way from reaching their peak. They are a band with the power to shred the shackles of King Kong. As someone once said, “this lot will just become awesomer and awesomer!” Get rid of the bullshit in your life with Bull!

All the photos apart from the gig poster were taken by me on my cheap Chinese android phone.The videos were all found on YouTube, if one of them is yours and you would like a credit or for me to remove it please let me know.