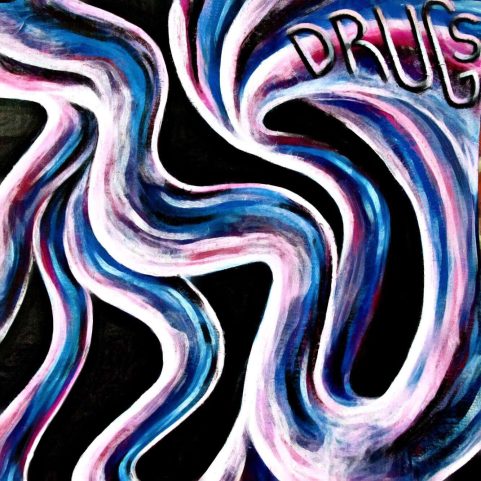 Tommyrot are another fine young band from York who were formed, last October, from the ashes of Azera. I saw Azera back in January 2019 and they were pretty bloody good. The big changes in becoming Tommyrot are that they no longer have a singing drummer, Rhys has moved from bass to drums, Greg from lead guitar to bass while Felix and Kieran are the new vocalists and stayed as joint axemen. The boys met at Access Creative College in York and have played four gigs so far. Hopefully, there will be many more post-COVID-19 lockdown.

They have their first single, “Drugs” out now (click here to check it out on Spotify). It is a funk and grunge blend that has been overlaid with the best elements of slacker rock. Imagine the Red Hot Chilli Peppers take on the Ohio Players, Nirvana’s quieter moments, and Pavement at their peak. If you like any of that combination you will probably love “Drugs”. The lyrics describe coming down from a particularly bad trip. The opening line “That’s a fat banana, why’re you whipping it out?” is not an outtake from a Carry On script, nor does it describe a huge spliff (which was my first thought). It is about the benefits of bananas making a comedown less extreme, according to Kieran. There is some truth in that though. Serotonin is the chemical in the human body that helps with feelings of wellbeing and happiness and Tryptophan is the amino acid that gets converted to 5-HTP, which eventually gets converted to serotonin in your brain. The key Tryptophan heavy foods are tuna, eggs, and bananas.

Use drugs sensibly people and maybe avoid a tuna, egg and banana smoothie to aid your comedown! But whether drugs are your thing or not make sure that “Drugs” by Tommyrot is your thing!