Hello again everyone how are well all then? I hope that you’re all ok because I have some very sad, bad, bleak news to impart. You really should be sitting down when you read this. Trust me it is the worst music news I’ve had to deliver since I started blogging, I know that’s only six weeks ago but this is really dreadful. So are you sitting comfortably? This is a bit like ‘Watch With Mother’ now isn’t it? Right I’ve been putting it off for long enough, now I have to tell you, stay in your seats. “Agadoo” by Black Lace is going to be reissued soon. See I told you it was awful news. It will be a 2009 remix and the video has been directed by Kevin Kennedy who used to play Curly Watts in Coronation Street, he also appears in it. He must need the money because this is a crime against music. The song was originally released in 1984 and made it to number 2 in the UK charts, held off the top spot by George Michael’s “Careless Whisper”. Click here to see just how bad it is, but be warned click at your own peril!

They should be arrested for those haircuts alone never mind that bloody song!

I have some other news too, not as bad as the first piece though. Apparently Ozzy Osbourne has had a premonition of his death. This is the quoted comment from Ozzy, “Some bird with some very rare virus is going to fly over my head. It’s going to shit on me and I’m going to melt on the floor” I presume he means a bird of the feathered variety. Can we also assume that it has nothing to do with drumming up publicity for the new series of ‘The Osbournes’ which will be called “The Osbournes Reloaded”. Reviews so far have completely panned it. perhaps he could do a deal with Satan and get that bird to shit on Black Lace instead?

Will it be the lesser spotted Sharon Bird that shits on Ozzy's head?

Have you been following the coverage of the G20 summit? There is actually a music link here too, not the fact that Bob Geldof was pontificating as usual either. the Queen usually gives visiting world leaders and dignitaries a signed framed photograph of her and Prince Phillip, she receives a wide range of gifts in return. This week she received a video iPod from the Obama’s. It was preloaded with photos of the Queen’s state visits to the US in 1957 and 2007, some video and audio of Barack Obama’s speeches including the inauguration and 40 great show tunes. The Queen loves musicals apparently and the gift also came with a rare songbook which was signed by Rodgers off of Rodgers and Hammerstein.

And finally on the news front the two remaining Beatles, Sir Paul McCartney and Ringo Starr will be taking part in a live public webcast later today, April 3rd (12 noon EST). The pair will be helping promote the David Lynch Foundation’s initiative to teach at least one million ‘at-risk’ youths to meditate. perhaps they’re seeking “Instant Karma” The pair along with many other rock luminaries have been practising Transcendental meditation for years. To take part in the conference visit davidlynchfoundation.org Later this evening McCartney and Starr will be joined by a cast of many at new York’s Radio City for a benefit concert to raise money for the David Lynch Foundation. Performers include Eddie Vedder (off of Pearl Jam), Moby, Sheryl Crow, Ben Harper, Paul Horn, Bettye La Vette, Mike Love (off of the Beach Boys) and Jim James (off of My Morning Jacket).

David is ready to release his chicken over Ozzy's head

Have any of you seen the BBC documentary ‘The Queens Of British Pop’? I saw part 1 this week and it was rather good. It featured Dusty Springfield, Sandie Shaw, Suzi Quatro, Siouxse Sioux and the mighty Kate Bush. Click here for the link. yes I know Suzi is American but she did have her biggest success in the UK. As for Kate well on this day in 1979 she made her live debut at the Liverpool Empire. Kate is also the number one search term used which arrived at this very blog. More than 700 searches for Kate have found their way here. The next two are Pink Floyd with over 600 and Lily Allen with nearly 200 plus another 10 for Lily Allen Naked! 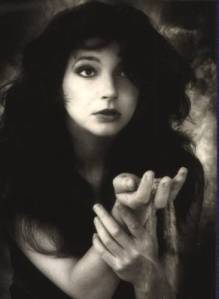 Kate has just released a Falcon towards Ozzy, perhaps it would have been easier to unleash the Hounds Of Love!

Here comes another blatantly shameless plug for my son Luke’s band Steal The Smile. They are playing at the Face Bar in Reading this evening so go and check them out. If you can’t make it get yourself over to their MySpace page by clicking here and let me know what you think of them.

I’ll end todays post with a couple of ‘onthisdays’ and the birthdays will return another time! Firstly on this day in 1975 Steve Miller was charged with setting fire to the clothes of a friend, Benita Diorio. Presumably not a close friend or perhaps he had the hots for her! Police arrived at Miller’s house to find Benita trying to put out the flames. Miller began fighting with some of the policemen and was eventually charged with resisting arrest.

And finally on this day in 1993 the Bluebells were at number one in the UK with “Young At Heart” The song had originally been released some ten years earlier. But this time around it was the beneficiary of a Volkswagen TV advertising campaign. Here’s one for you fact fans too, the song was co written by Siobhan Fahey off of Shakespears Sister and Bananarama!

The Bluebells contemplate drowning themselves after hearing that Agadoo is about to be released again!