Here comes the third monthly Mayhem Top 20 Song Chart. This month’s number one is from a band that has featured on this site quite a few times and will continue to do so if they keep up the superb quality of their great music and live shows. They scraped into the artist chart at number 20 back in March. But now they follow Prairie Brigade and the Hazy Janes to hit the top spot in the song chart. Who am I talking about? A fabulous York band called Vaquelin with their current single “Roads Leading Nowhere”. They managed to hold off competition from Harry Styles who sits at number 2. There are a lot of oldies in this month’s chart, including Bill Withers, Love, Steely Dan, the O’Jays, the Clash, Mike and the Mechanics, Traffic, and the Sex Pistols. T.Rex take “Metal Guru into the top 20 for the second time in three months, it hit number 20 in March and sits at number 18 for May. David Bowie makes it three entries in a row and Roxy Music appear for their second month in a row. The oldest release on the list is “Alone Again Or”, a 1968 UK hit from Love at number 8. A really eerie cover of Bowie’s “Let’s Dance” by M Ward hits number 6 and my favourite Professor Elemental song, “I Love Libraries” gets to number seven. There are also appearances from Leeds band Astoria at a very creditable number 4, the Institutes, Let’s Eat Grandma, and Kendrick Lamar. Eight artists featured in the Mayhem Top 20 Artist chart for May also feature on this list. We would love to hear your thoughts on the Mayhem Song Top 20 Chart as we hope to make it a regular feature. Check out the complete list below.

The Mayhem Artist Top 20 artist chart for May 2022 is here. Many of you know that I am a keen user of a site called Obscurify. It claims to tell you how obscure your listening on Spotify is. Compared to the rest of the UK I achieved a level of only 96% more obscure than other users in the UK this month, one point up from last month’s 95%. Regular readers will know that it also lists my most obscure artists, (two of which had been there since I began doing these posts, although for the first time ever Woke Up Dead and Promethium are not on that list! Sorry chaps) which currently are;

Gene (The best British band of the Britpop era in my opinion, back for a second month)

Vaquelin (One of York’s finest young bands. They will definitely be in the Mayhem Song chart for May 2022 when it is posted soon. Check out their latest video below too)

As for the May Top 20, only Dame David remains from the last chart, but he drops from number one to number six. Other classic artists include Sex Pistols (at number one), Pink Floyd, Lou Reed, Elvis Costello, John Lennon, and The Clash. A few would giants make an appearance too including Bill Withers and the Four Tops. I learned in Uncut magazine this month that somewhere out there is an unreleased album that the Tops recorded with Norman Whitfield. Who do we need to speak to about getting that released? There is quite an eclectic mix here for May: Father John Misty, OMD, Steve Earle, Professor Elemental, and The The. Harry Styles rocked up at number 14 in April and hits number two in May. I am most definitely a Harry Styles fan, he is a hugely talented artist and I bloody love his music! I would love to hear your thoughts on this chart. Oh and keep your eyes open for the third Mayhem Monthly Song Chart, just like an old-school top 20 singles chart! That one includes songs by a few of the artists featured in the April Artist Chart. Will one of this month’s obscure artists get the coveted number one in the song chart? Maybe, but you will find out soon!

Where does the time go? It is already time again for my series of the twelve days of Christmas. This year I want to share with you a collection of songs that communicate hope. I think this is incredibly important after all the things that have gone wrong in the world and events that have left many people feeling hopeless. Can music change the world? Maybe not, but it sure as hell can help many of us get through dark times. I am kicking off with a truly wonderful tune from the late, great Bill Withers. “Lean On Me”.

“And the only things I see are emptiness and loneliness and an unlit Christmas tree” Blog Advent Calendar Day 13 December 13, 2014 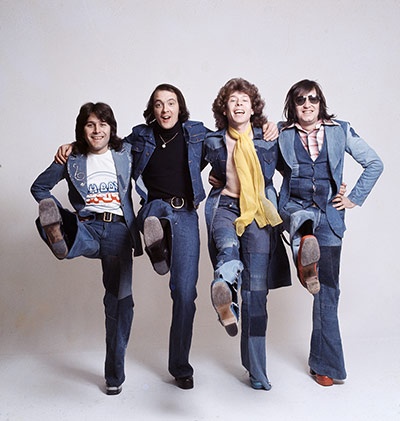 Are you excited yet? You must be right? There are only 12 more big sleeps to the big day. Have you bought all your presents? What did you get for me? I hope that it was something expensive. Anyway it’s December 13th a.k.a Day 13 a.k.a the letter ‘M’ of this years advent blog post. Regular readers will know that this year it is the ABC of British bands. If you’re not a regular reader please feel free to waste an hour catching up on the letters ‘A’ to ‘L’.

In the meantime though let’s get back to todays band; it’s Mud. That’s neat, that’s neat, that’s neat, that’s neat isn’t it? Although the band formed in 1966 they didn’t have their first chart hit until 1973 with “Crazy”. That kicked off a run of UK 10 UK top 20 hits lasting up until 1975. This included three UK number one hits; “Tiger Feet“, “Lonely This Christmas” and a cover of Buddy Holly’s “Oh Boy”. Ellie Hope off of Liquid Gold who had a big hit with “Dance Yourself Dizzy” in 1980 sang backing vocals on Mud’s version of “Oh Boy”.

Band members were Rob Davis (guitar), Ray Stiles (bass), Dave Mount (drums) and Les Gray on vocals. Sadly Les and Dave are no longer with us having passed away in 2004 and 2006 respectively. The last time the four of them played together was at Dave Mount’s wedding in 1990. Rob Davis has had a lot of success as a songwriter in recent years co-writing hits for Kylie Minogue (“Can’t Get You Out Of My Head”) and Spiller (“Groovejet (If This Ain’t Love)”) among others. But enough of the recent activity, take yourself back to the 70s and enjoy some Mud classics.

Once in a while you are presented with the opportunity to see a band that you have listened to a lot but have never really made the effort to see play live. I had a lucky break as my friend Andy Golborne’s partner Rachel was unable to attend a gig by the truly splendid Counting Crows. So I became the lucky owner of her ticket and went along to the O2 Apollo in Manchester last to see the band. This was the first time I have seen them but Andy has seen them on many occasions.

The support was provided by Lucy Rose a 23-year-old singer songwriter from Surrey. She has previously provided some vocals when recording with the Bombay Bicycle Club. She strikes me very much of a young Joni Mitchel but with even more jazz sensibilities. Her band is tight and very talented. To me there is almost an undercurrent of some of the better aspects of prog Rock in their delivery. The exposure of touring with Counting Crows can only enhance her profile and I would definitely see her again. In fact I would like to apologise for missing her at last years Reading Festival.

The Counting Crows. What can I say? Probably that they are even better live than they are on record and I do believe that their recorded output is bloody good! I can’t believe that this is the first time I have seen them in concert. Adam Duritz mentioned that he had woken up in the morning with a sore throat but that did not seem to mar his vocal performance which was brilliant. it did mean that we missed out on some of the story telling introductions that he often does when playing live. But that was a very small price to pay. The crowd was made up of mostly hard-core Crows fans. The bloke in front of me went nuts for almost every song and it looked like he had his kids with him, they also seemed to love it.

The band seems to really love what they are doing as well and this made for a stupendous all round performance which they enjoyed as much as the audience. I was really pleased that they raided their back catalogue excellently and didn’t stick with just the big hits; there was no “Mr Jones” for example. The band took to the stage to the sound of Bill Withers’ classic “Lean On Me” and left at the end of the evening to “California dreamin'” from the Mamas and Papas, to which Mr Duritz led us in a sing along. But obviously it’s what was sandwiched between those classic records that was most important. If I mentioned every highlight I would simply type in the set list! The first part of the show had excellent versions of “Omaha” and “I Wish I Was A Girl”.

The acoustic set in the middle of the show was beautiful, especially the arrangement of “Mercury”. acoustically this was accompanied by a cover of the Grateful Dead’s “Friend Of The Devil” and another Counting Crows classic, “When I Dream Of Michelangelo“. After that excellent trio the set kicked back into electric gear, starting with a rousing “Round Here”. The cover of Gillian Welch‘s “Look At Miss Ohio” was truly stunning and new arrangement (to me at least) of “Rain King” was a truly emotional experience. The encore included “Washington Square” and a gorgeous rendition of “Holiday In Spain”. are the Counting Crows the best live band I have ever seen? Not quite but they are definitely in my top 5 and I will certainly see them again. In fact next time I shall take the wonderful Catwoman (a.k.a. my beautiful wife Catherine) with me.

Please note that apart from the picture at the top of this post none of the images or films were taken by me.