This is the first in a not particularly regular series of posts covering some of my most favourite and in some cases poorly recognised artists. First up it’s Mr Johnny Nash. Johnny, despite his greatest success coming with reggae was actually born in Houston Texas on August 19th 1940. Like many of his contemporaries he sang in the choir at his local Baptist Church in his childhood and youth. He became a regular on a local television show called ‘Matinee’ in 1953 where he mainly performed covers of current hits. In another potential big break he entered a talent contest in the early 50’s where he eventually lost out to none other than the mighty Joe Tex. In 1956 he began a seven-year run of appearances on Arthur Godfrey’s radio and tv shows. Godfrey claimed to have ‘discovered’ Nash. Perhaps in the same way that Diana Ross ‘discovered’ the Jackson 5, she didn’t and it was in fact Gladys Knight. Johnny’s recording career began in the fifties when he signed a deal with ABC-Paramount and released his debut single “A Teenager Sings The Blues” Indeed he even had some US hits. Notably a cover of the Doris Day song “A Very Special Love” in late 1958 and also “The Teen Commandments” The latter was actually a collaboration with Paul Anka and George Hamilton IV. ABC had tried to market Johnny as another Johnny Mathis which led to him becoming disillusioned and did nothing to enhance his fledgling career. In my opinion this suggests that even in the 50’s the record labels would still opt for the easy route. ABC had a handsome black crooner on their books so they thought the easiest step would be to market him just like another handsome black crooner; Johnny Mathis. I feel that both had very distinct voices and should have been developed and promoted as individuals.

An Early Shot Of Johnny Nash

This disillusionment with the record industry saw Nash take his first steps in what could have been a very successful parallel career as an actor with a starring role in the film “Take A Giant Step”. It turned out to be his only starring role. He played a black teenager raised in white neighbourhood who struggles to fit in. Johnny won a Silver Sail award from the Locarno International Film Festival for his performance. The film’s Executive Producer was Burt Lancaster. It was filmed in 1958. As far as I am aware there has never been a DVD release. In 1960 he appeared in the movie ‘Key Witness’ alongside the supremely talented Dennis Hopper which received some good reviews and a degree of critical acclaim in Europe. After this he made a return to the recording studio where he recorded a string of middle-of-the-road tunes. None of these singles (which included releases on the Warner Brothers, Groove and Argo labels amongst others) were able to even dent the charts so once again his singing career began to tail off. Eventually he recorded the R & B song “Let’s Move And Groove Together” in 1965. This reached the dizzy heights of the US R & B top 5. But perhaps much more significantly for Nash the record became a massive hit in Jamaica. He embarked on a promotional tour of Jamaica in 1967. In a follow up trip he recorded the single “Hold Me Tight” which was based around a very strong reggae groove. This recording was made at Byron Lee’s (off of Byron Lee and the Dragonaires) Federal Studios. The single was released on the JAD label, which Nash had set up with producer Arthur Jenkins and businessman Danny Simms. The label’s name was made up of the first letter of the owner’s first names. The song reached the top 5 in both the US and the UK. He also reached the top 40 again with a reggae cover of the late great Sam Cooke’s “Cupid” which has more recently been covered by the talented Miss Amy Winehouse. In the same period he also had a hit with a cover of the Bill Johnson song “You Got Soul” Sadly JAD folded in the early 70’s. Click here to listen to Johnny’s “(I’m So) Glad You’re My Baby” from 1967 and a cover of “Ole Man River” which I had never heard until I started researching this post, just click the title for that one 🙂 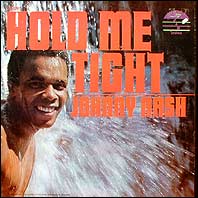 The cover of Johnny Nash’s “Hold Me Tight” album

After “Cupid” went higher in the UK chart (no. 6) than it did in the US (no. 39) Nash decided to move to the UK in 1971. That year he became the first artist to have a major hit with a Bob Marley composition, the classic “Stir It Up” This was the first Johnny Nash single I ever bought and it also made me search for more of Bob Marley’s music too. Nash had met the Wailers while visiting Jamaica in the late 60’s. Nash was impressed enough to sign Bob, Bunny Wailer and Peter Tosh to an exclusive deal with JAD records. He also produced a number of songs for the band. By the time he released “Stir It Up” Nash was signed to CBS/ Epic Records. The follow up was the classic “I Can See Clearly Now” which was a top ten hit in the UK and went to the top of the charts in the US where it stayed for four weeks. Click here to see Johnny performing the song on Bert Sugarman’s Midnight Special TV Show in 1973. Many people have covered the song. Notably Jimmy Cliff for the movie ‘Cool Runnings’ and perhaps rather strangely, given that he was blind, Ray Charles. Following his success with a reggae influenced sound Johnny moved to Jamaica in 1972 where I believe he still owns a recording studio. The Wailers had backed Johnny on some of the recordings he made in 1971/72 and John ‘Rabbit’ Bundrick who also played with Free was a contributor to the ‘I Can See Clearly Now’ album. One of Bundrick’s songs and indeed one of my favourites from that album was “The Fish And The Alley Of Destruction” This has strangely been left off the extremely hard to find CD reissue of the album. Click here to listen to Johnny perform the excellent “Cream Puff”

After this success in the early 70’s Nash had yet another chart hiatus despite releasing what I believe to be his best album “My Merry Go Round” in 1973. This has now been reissued on CD, you really should make every effort to buy it! He was back in the charts in July 1975 where he reached number one in the UK with the song “Tears On My Pillow” Contrary to some sources on the internet this was not a cover of the Little Anthony And The Imperials song of the same name nor is it the same song that Kylie Minogue released a few years back. The song was originally called “I Can’t Take It” and was written by Ernie Smith a Jamaican singer/songwriter 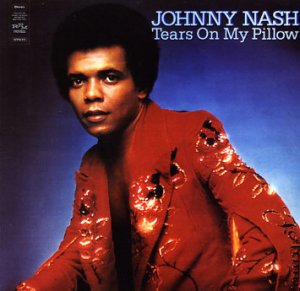 The cover of Johnny Nash’s “Tears On My Pillow” album

Johnny had a few more chart hits in the 70’s, notably with another Sam Cooke cover “(What A) Wonderful World” he was known to be recording with engineer Andy Bradley at Sugarhill Studios in Houston in 2006, although this might have been remastering old material rather than recording anything new. He seems to have retired now although I would love to hear from someone who can tell me that isn’t the case. In the meantime I think it’s a travesty that his back catalogue has largely been ignored for CD reissue. “My Merry Go Round” and “Tears On My Pillow” were both reissued in 2007 and apart from a number of compilations that’s about it. Surely it’s about time all of the Nash albums were reissued on CD I for one would buy them all! Those reissues should also include an album he recorded with Kim Weston in the late 60s and also the score he recorded for a Swedish movie in 1971. Who knows if it hadn’t have been for Johnny maybe Bob Marley and indeed reggae wouldn’t have proved so successful and durable as it did. I’m not religious in any way but if I did believe in angels I reckon they would sing with a voice like the wonderfully talented Johnny Nash!

Johnny Nash with Andy Bradley at the Sugarhill Studios in Houston, Texas in April 2006