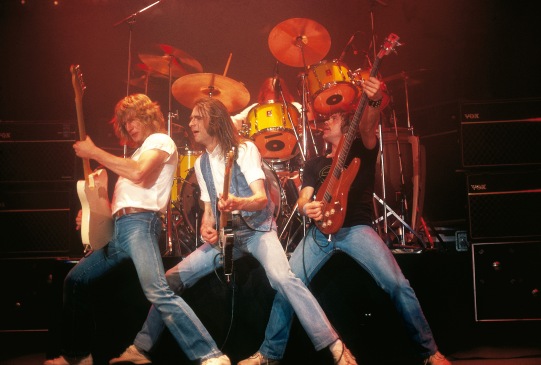 Francis Rossi off of Status Quo has a new memoir out called ‘I Talk Too Much’. I haven’t read it yet but I am definitely tempted after a ’10 Things We’ve Learned About Status Quo’ in a recent article in Planet Rock magazine. I won’t list all ten, I will leave you to discover most of them yourselves. But one particular point really appealed to me and my warped sense of humour. Before they chose Status Quo as the name of their band the boys considered calling themselves The Muhammad Ali’s, simply so that they could use the slogan; “They’re The Greatest!” 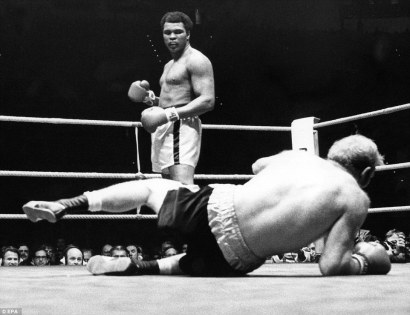 I hate to say it, but I do think Status Quo was a better choice. What do you think?

Hello everybody on this glorious Tuesday 17th March, well the weather is glorious where I am anyway. Firstly did everyone see the reports about Francis Rossi of Status Quo in the press last week? He finally had his hair cut short, yes he has had his pony tail chopped off. His hair had been receding considerably at the front too, so perhaps he should have done it ages ago, but at least he’s done it now. Personally I really don’t think old grey haired men with receding hair lines and pony tails is a good look. But then maybe I suffer from hair envy as I do have a head like a billiard ball and I have also been likened before to Sam the Bald Eagle from the Muppets, so what do I know! Anyway you can read the story and see the pictures in an article from the Guardian by clicking here (or should that be clicking hair?). Either way it really does have the same shocking effect as seeing Elvis getting his hair cut for the Army in 1958. 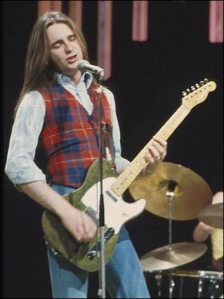 Francis auditions for the Bay City Rollers in his younger days

On with the usual stuff now starting with just a couple of birthdays. Firstly today is the 42nd birthday of Billy Corgan from the Smashing Pumpkins. Whilst he is younger than me we do share the same first name and hairstyle! Billy was (and presumably still is) a big baseball fan. He played for his school and whilst there he also built up a collection of baseball cards that reached 10,000. Wow that even makes my CD and comic (sorry graphic novel) collections look tame! Corgan also dated Courtney Love before she came into Kurt Cobain’s life. Corgan even shared some songwriting credits on Courtney’s band Hole’s album “Celebrity Skin”. Incidentally you should check out Courtney on MySpace, in my opinion she has a fantastic presence there and uses it really well. The Smashing Pumpkins broke up in 2000 but reformed in 2006. In the ensuing period Corgan formed the rather short lived Zwan and also released some solo material. In my opinion the Pumpkins 1997 album “Mellon Collie And The Infinite Sadness is one of the best albums to come out of the 90s. Check out “1979” from Mellon Collie and the Infinite Sadness by clicking on the song title.

Billy appeared to be (s)lightly cross

Today is also the 34th birthday of Justin Hawkins off of the Darkness and Hot Leg. Since the Darkness split up and before Hot Leg came to be Mr Hawkins was quite a busy boy. He issued a solo single, a cover of the Sparks song “This Town Ain’t Big Enough For Both Of Us”. He took part in the competition to represent the UK at the 2007 Eurovision Song Contest. I’m glad he didn’t win that, the voting is so political and territorial that the UK is unlikely ever to win it again. In the Film ‘Telstar’ which is based on the life of the late great (finally those l’s & g’s make a return!) Joe Meek, Justin will be taking on the role of the wonderful English eccentric, the late great (with a vengeance, l & g’s ra ra ra) Screaming Lord Sutch. I saw the Darkness live at the Reading Festival twice. Firstly in 2003 when they were about 4th on the bill and still relatively new, they were absolutely fantastic one of the best bands of the whole festival that year. However they went on to headline the following year and personally I don’t think that they were ready. Their second album still hadn’t been released and they tried out some of the new songs which seemed under rehearsed. In my opinion they were one of the worst Reading headliners that I have ever seen and I have been going for a long while, the fireworks at the end were the most exciting thing about their set that year. I reckon they peaked way to early. However I do feel that Justin Hawkins is immensely talented. I loved both the Darkness albums and the current Hot Leg album is pretty damned good too. Here is the Darkness classic “I Believe In A Thing Called Love” and a future Hot Leg classic “I’ve Met Jesus”

The CBGBs club opened in 1973 in Manhattan and sadly closed down in 2006. The initials stood for Country, Blue Grass and Blues although strangely enough it is most associated with punk. However it’s full name was CBGBs & OMFUG the second set of initials stood for Other Music For Uplifting Gormandizers. I must confess that I haven’t got the foggiest as to what Gormandizers means, do you? The final show at CBGBs was by the fabulous Patti Smith. “Elegie” was the last song ever played at CBGBs, a very sad moment indeed

And finally on this day in 1997 US singer Jermaine Stewart died of liver cancer which was believed to have been complicated by HIV/ AIDS. He had a UK number two hit in 1986 with “We Don’t Have To Take Our Clothes Off“. He also worked with Shalamar, the Temptations and Boy George amongst others, largely providing backing vocals. He provided many of the backing vocals on Culture Club’s “Colour By Numbers” album. His first big break was becoming a dancer on the iconic US TV show ‘Soul Train’