“Last night I told her this time it’s all over, making ten times I told her goodbye” – Advent post day 4 December 4, 2013

It’s the 4th of December and time to open yet another door on my Advent Calendar musical extravaganza. As it is a songs with numbers in the title theme this year it is obviously number four today. I have two very different but excellent songs for you today. 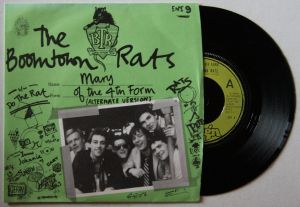 First it’s the Boomtown Rats with “Mary Of The Fourth Form” or “Mary Of Year 10” as it would have to be called nowadays. The song was released in 1977 and became the band’s second hit. It reached number 15 in the UK and number 12 in Ireland. The band broke up in 1986 and reformed earlier this year with great success. Albeit without two of the original members; Gerry Cott and Johnnie Fingers. Singer Bob Geldof once wrote for the NME. The band also number a few famous people among their fans, including Jane Horrocks, J K Rowling, Jim Kerr off of Simple Minds and Courtney Love.

Second song of the day today comes from the late, great country star Faron Young. It is a song that was originally released in 1971 it reached the number 3 spot in the UK the following year. It only made it to number 92 on the Billboard chart in the US. However it did become Faron’s first number one on the country music charts. A live clip of Faron Young singing the song was the first song to be played on the Country Music Television (CMT) cable channel when it was launched in 1983. The song has been covered by Tom Jones in the 1980s. It is also heavily referenced in the fabulous “Faron Young” from Prefab Sprout which was a UK single in 1985. Disappointingly it only made number 74 in the UK charts. The cat owned by Frieda in the Peanuts cartoon strip was named Faron as Charles Schultz admired the singer.

So finally after a few false starts Stephen Morrissey has published his autobiography wich is either very cleverly or very lazily (depending on your opinion) titled ‘Autobiography’. Most of the reviews have been reasonably good, perhaps driven by the reviewer thinking they might get a scathing review of their own critical talent from Mozzer. Anyway I haven’t read the book yet which rather interestingly is published by Penguin Classics.

So if I haven’t read the book what is the purpose of this post? Well simply to publicise something  that has been published on Tumblr under the title ‘This Charming Charlie’. It is a collection of Charles Schultz‘s Peanuts cartoon strips with their original dialogue replaced by Morrissey lyrics. Click here to check it out, but do it quickly because someone (I wonder who, because it certainly doesn’t seem to be Mozzer) is taking a copyright action against Lauren LoPrete’s site.