In 1862 the writer George Eliot was the first person to use the term pop music. She (yes George was a woman) wrote “there is too much pop for the thorough enjoyment of chamber music“. So to recognise that staggering piece of trivia and to celebrate some classic pop please enjoy these songs and feel free to suggest your own contributions. 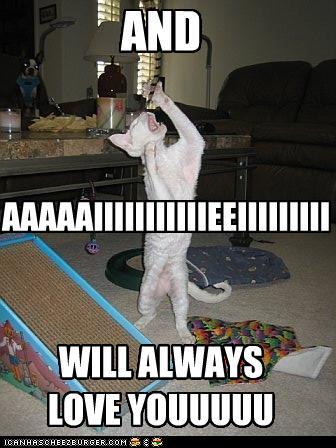 Here’s a rather amusing pop music related joke for you. What was Whitney Houston’s favourite type of coördination? Hand Eyeeeye. Do you get it? Do you like it? Feel free to contribute your own music jokes!

Filed under: Review — justwilliam1959 @ 7:00 am
Tags: All The Lovers, Aphrodite, Busby Berkeley, Catwoman, Dolce And Gabbana, Got To Be Certain, I Believe In You, I Should Be So Lucky, Kylie Minogue, Las Vegas, Les Folies Tour, Looking For An Angel, MEN Manchester, Pegasus, Pop music, United States, X Men

Last Friday it was my great pleasure to accompany Catwoman to the first of Kylie‘s Manchester shows. I had imagined that Kylie would really put on a show and she certainly did. It was one of the most amazing gigs I have ever seen, the staging, production and dancing were out of this world. There were influences from Hollywood, Busby Berkeley, Classic History and Super Clubs.

Kylie went through maybe six or seven costume changes and in my opinion looked pretty fabulous in all of them. Her initial entry on stage was via a hydraulic gold sea shell, she also arrived via Pegasus and a few other routes too. She also performed “Looking For An Angel” while being carried over the stage by an angel! It was like X Men Live! 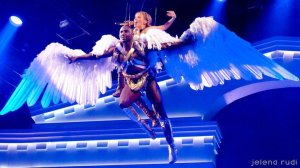 I have never seen a show with so much water either. There were some amazing fountain displays and the people in the VIP area and those at the front of the extended stage and walkways were soaked. Many of them had paid extra for that privilege. She really seems to understand her audience. The male dancers would have been like a spectacular wet dream for the many gay men in the audience. There were a couple of banners asking Kylie to let them become her gay husband. All the recent hits were there for the long-term fans, although no “I Should be So Lucky“. She also took a request which someone gave her via a 7 inch single. For that she did 60 seconds or so a capella of “Got To Be Certain” 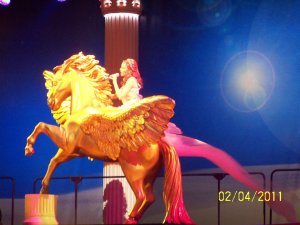 She sang most of the new album; ‘Aphrodite’ and for me it made me appreciate it even more. “All The Lovers” was a really dazzlingly spectacular showpiece. My favourite Kylie song ever is “I Believe In You” and she sang that while being pulled around the stage in a chariot by some well toned blokes wearing not much Dolce and Gabbana.

I would definitely pay to go and see her again, but the UK gigs are pretty much done now. The tour moves to North America at the end of this month. She never really became a massive success in the US and frankly I don’t understand why? there is talk of her taking a residency in Las Vegas and on the evidence of this show she would go down extremely well. So let me finish by saying thank you to Kylie and the band, the dancers, production team, roadies and anyone else involved. It was a great night and Catwoman is still filled with excitement from it! 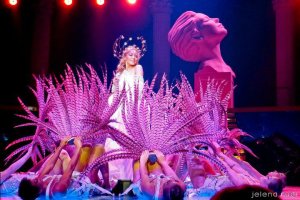