“Blades are long, clenched tight in their fist, aiming straight at your back and I don’t think they’ll miss” February 4, 2011 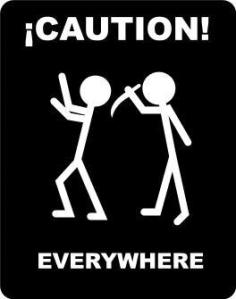 This is quite a difficult post for me. Some months ago I tried to help out a good friend by finding them a job where I was working at the time. You understand, I hope, that giving names may cause them embarrassment and get me into trouble. Actually it is the former that bothers me most. Anyway the lily livered people where I was working decided that as they had seen my friend when she previously worked at the same place via a consulting company that they didn’t like her. Lily livered is a bit strong for one individual for whom I have immense respect, he bothered to tell me personally how he felt about my friend and that he didn’t rate them. Fair enough and to each their own, I didn’t agree with him, but at least he had the balls to voice his opinion to me. 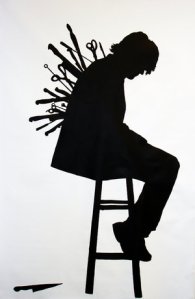 However there was at least one other individual (personally I believe it was more than one) who decided to go straight to the top and say that they didn’t like my friend and that I should not be allowed to appoint them. I was informed of this but the names of the complainants were not given as ‘they had given their views in confidence’. Which obviously gave me no right of reply. so I was persuaded against my better judgement not to employ my friend. I then compounded this by not telling them the whole truth as to why there was no longer a job. I did this to spare their feelings.

What happened next was that my friend went back to the same place with another consulting company whereupon one of the sad two-faced losers that had actually expressed their liking for my friend during that previous debacle once again complained to the ‘powers that be’ that my friend should not be employed. I am not one to seek revenge, but I do believe in karma and if an opportunity presents itself for me to crap on this pathetic two-faced lowlife, believe me, I will. he knows who he is and so do I. He must be aware that what goes around comes around, but then perhaps he’s too much of an arsehole to realise.