“Disappointment haunted all of my dreams” August 2, 2017 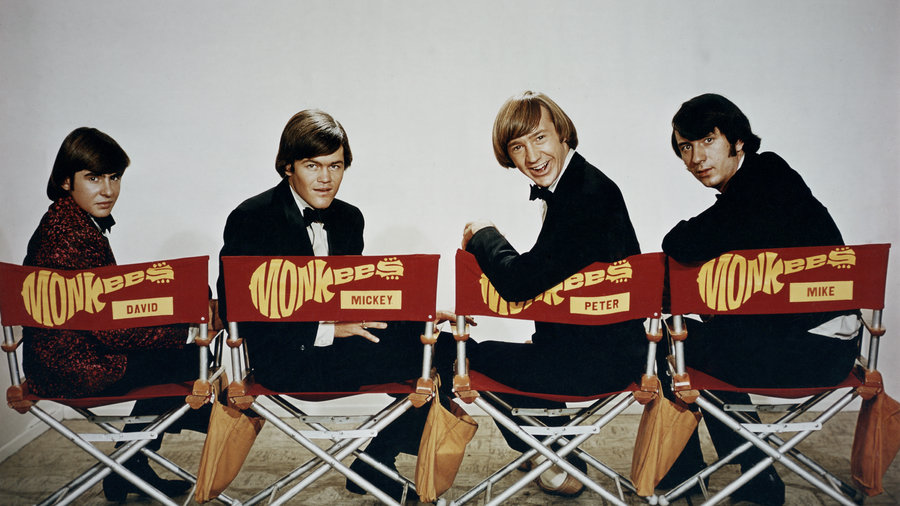 My wife said that she would leave me if I couldn’t stop my obsession with the Monkees. I thought that she was joking, and then I saw her face…… 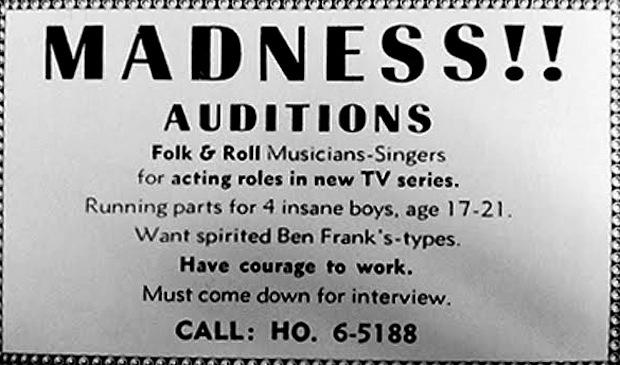 Anyway although the Monkees were effectively a manufactured band I thought that they were pretty good, how about you? Did you know that over 400 musicians auditioned to be in the band, including Stephen Stills, Harry Nilsson, John Sebastian, Paul Williams, Danny Hutton (of Three Dog Night) and allegedly Charles Manson. Although some reports state that Manson was in prison at the time of the auditions.

“Aunty Milly, ran willy nilly when her legs they did recede” December 8, 2010 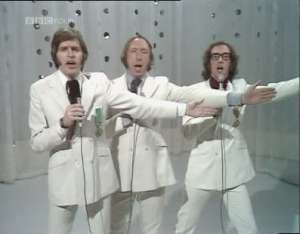 So here we are then ready to reveal what’s behind the cardboard door of my UK Christmas Number Ones Advent Calendar for December 8th. Where the hell does the time go? Anyway today’s choice whizzes you way back through the sands of time to the Christmas of 1968 when “Lily The Pink” was number one for the Scaffold. It held sway at the top for three weeks. There were supported by some big stars although to be fair one of them hadn’t become a star at that point. Backing vocals on the song were provided by our stars and those stars were Elton John, who was not much more than a small stone in the celebrity universe at that time and Graham Nash off of the Hollies and later Crosby, Stills, Nash and Young. In fact it is thanks to Mr Nash that the line “Jennifer Eccles had terrible freckles” was added to the song. In reference to the Hollies smash “Jennifer Eccles”

The song was based on a traditional folk song “The Ballad Of Lydia Pinkham” although the band provided most of the new lyrics. The band was from Liverpool and counted Mike McGear, Paul McCartney‘s brother among their members along with Roger McGough and John Gorman. The Scaffold performed a lot of McGough’s poetry in their live shows and they also had two other top 10 UK hits with “Thank U Very Much” in 1967 and “Liverpool Lou” in 1974. The latter was recorded with Paul McCartney and Wings. 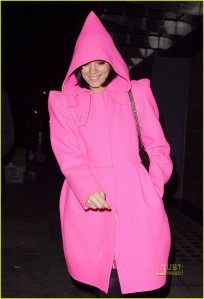 Not the Scaffold at all, just an excuse for me to show another picture of the delightful Lily Allen........ Lily In Pink!

The band broke up in the late 70s but have reformed on a few occasions, often for charity and most recently to record a special song to commemorate Liverpool’s year as UK City Of Culture in 2008. Enjoy the band performing the song below.

Once again it’s been a long while since my last post, but not as long ago as the last time I attended Ryefield Junior School in Hillingdon. I was just a little boy called Billy in those days. I attended the school from 1965 until 1970 up until I was 11 years old. I discovered this week that it is Ryefield School’s 50th birthday celebrations this year, I hadn’t appreciated that I was just one year older than the school. One year and three days to be precise as it opened on January 4th 1960. So how did I find out about this auspicious occasion? Well I have mentioned Ryefield in a previous post and the present Headmaster Mr Dodd was doing some research and chanced upon my blog. Serendipity huh?

Anyway it got me thinking about those good old school days and for me Infant and Junior School was so much more fun than Senior School. I will remember Ryefield for many things. But the two that spring to mind immediately are the wonderful headmaster from my days there, Mr Yates. I don’t know much about him other than the fact that to me he was a wonderful man and although I didn’t realise it at the time he was probably my first mentor from outside my family circle. He encouraged me to learn by reading and indeed writing too. I also loved all those mental arithmetic tasks he set. The second thing that is in my mind about those years is my first ever foreign trip. It was a school trip to Paris and it was my first ever flight too. One of the things we were asked to do was write a postcard on the first day to send back to our parents. I did write my postcard, but I left it in my case and gave it to my Mum and Dad when I came home. I can only assume that they weren’t too worried about me

And so on to the music, for that is the purpose of this little blog. And obviously todays choices are all school related, I hope you enjoy them and as usual your school song suggestions would be welcomed

Schools Out – Alice Cooper. OK I know this was an obvious choice, but it is good isn’t it. For me it was one of the defining moments of early 70s music television

Remember The Days Of The Old School Yard – Cat Stevens. Just how talented was this man? Still just as talented these days now he is known as Yusuf. I believe the additional female vocal on this track is Elkie Brooks. Linda Lewis also recorded an excellent cover of this song, although sadly I can’t find it on line

Teacher I Need You – Elton John. A classic slice of Elton and Bernie from the wonderful 1973 album ‘Don’t Shoot Me I’m Only The Piano Player’

Teach Your Children – Crosby, Stills, Nash & Young. This is accompanied by a photo montage that shows the Iraq war through the eyes of children

Don’t Stand So Close To Me – Police. Written by a former teacher, Gordon Sumner aka Sting and probably the only lyric which manages to rhyme cough with Nabokov, albeit it rather clumsily! This is the original version which is so much better than the 1986 remake

Be True To Your School – Beach Boys. This one says it all really doesn’t it and with added cheerleaders too.