Yet another gig recommended by my good friend Simon Pattinson and yet another one that he has got absolutely spot on. I am sure that he might get it wrong one day, but he certainly didn’t this time. It was also good to catch up with Mike Harrison as well. Once again it was a bargain, no more than five quid for four bands. How good is that?

First up were the magnificent Asio’s Eyes. Imagine Pink Floyd with a lot more punk and funk, perhaps joined by members of the original Parliament/ Funkadelic troupe, a couple of the Damned, add into this the Beatles at their most experimental, are you still with me? Good! Now all you need to do is add a massive dose of psychedelia. Stick all that in the blender, mix it with a few narcotics of some kind and you might well get Asio’s Eyes. Either way I have to say that this band is truly brilliant. It would be fair to say that I have never seen a more psychedelic band (perhaps until later into this gig at least!). I you have never seen them I suggest that you get off your arse and seek them out. 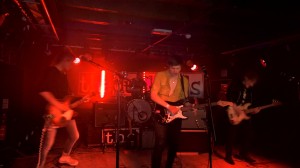 Next up were a band that regular readers of this blog will be very familiar with, the majestic Avalanche Party. One day I will watch them play and walk away thinking that they were far better the last time I saw them. Today was most definitely not that day! How the fuck does a band manage to get so much better every time I see them? I don’t know the answer to that, you’d better ask the boys in Avalanche Party. They were ably assisted tonight by a very talented guitarist from tonight’s head-liners Le Petit Mort. The old classics like “Mountains” were there along with new classics like “Money”. They played a great new song (apologies guys but I didn’t catch the title) and Jordan made another of his excellent incursions into the audience. If you still haven’t seen the amazing Avalanche Party then you haven’t been listening to me. Listen now and get out and bloody see them. That is an order!

Bull were on stage next and their membership includes two members of Worm, whose EP launch I saw at the Inkwell in Gillygate a few weeks back. Simon said that he thought that they sounded a little like the Strokes. He might be right but I saw much more than that. I think there are definitely elements of Frank Black and Bob Mould and even the more experimental R.E.M. tracks. A really exciting and punky band. I would definitely pay to see them again and I urge you to do the same. They are very tight with a really crisp sound and their musicianship is exemplary. Check them out now people!

OK so up until this point Asio’s Eyes were probably the most psychedelic band that I had ever seen. But then came the amazingly bizarre La Petite Mort. When people describe a band or someone as being “out there” I don’t think that they truly grasp what they are saying. But trust me, if there is an “out there” thermometer then La Petite Mort would blow the mercury right out of the top of it. Even if I wanted to say something negative about this band (and I don’t) then I would have to lie. Their playing and their stage presence is something to behold. This is a band that would be perfect for closing the Festival Republic stage at Reading/ Leeds. Are you listening festival organisers. La Petite Mort pull out everything in putting on a show. Guitars, bass and drums obviously. But also saxophone and sitar. On top of that they were joined by members of Asio’s Eyes for a proper bonkers final couple of songs. They finally left the stage after the drums were kicked over and a guitar was hung from one of the lights. If you like your music psychedelic and your bands somewhat mad then La Petite Mort are right up your street. They are definitely on my street and frankly I would go and see them again tomorrow if the opportunity arose. Can I compare them to any other acts or can I slot them into a genre? Nope I don’t think I can. But I can say that they are easily among one of the best bands that I have ever seen!

Finally it’s the public service announcements. None of the videos were filmed by me (all were available on YouTube) and all of the pictures were taken by me on my Nokia Lumia (can I have a new phone for the shout out please Nokia?). Also I had a chat with Tom, the bass player off of Asio’s Eyes and he is a top bloke. To the boys in Avalanche Party, sorry I didn’t get to spend a bit more time with you and where is my physical copy of the EP? 🙂