As the oft used recent phrase says ‘some heroes don’t wear capes’; Ian Donaghy a.k.a Big Ian is one of those heroes. He is the man behind the excellent musical variety gig ‘A Night To Remember’ in York. It has just entered its fifth year with an incredibly emotional and fun show last Saturday, 3rd March. OK so why is Ian a hero for putting on shows like this, because he does it to support some amazing local charities and since 2014 his initiative and passion have helped to raise more than £100,000 for some very worthy causes; St.Leonards Hospice, Dementia Projects in York, Bereaved Children Support York & Accessible Arts & Media. All the very talented roster of artists gave their time for free for yet another sell out show. I have no idea why Mr Donaghey is called Big Ian but it is certainly clear that he is a man with a really big heart. 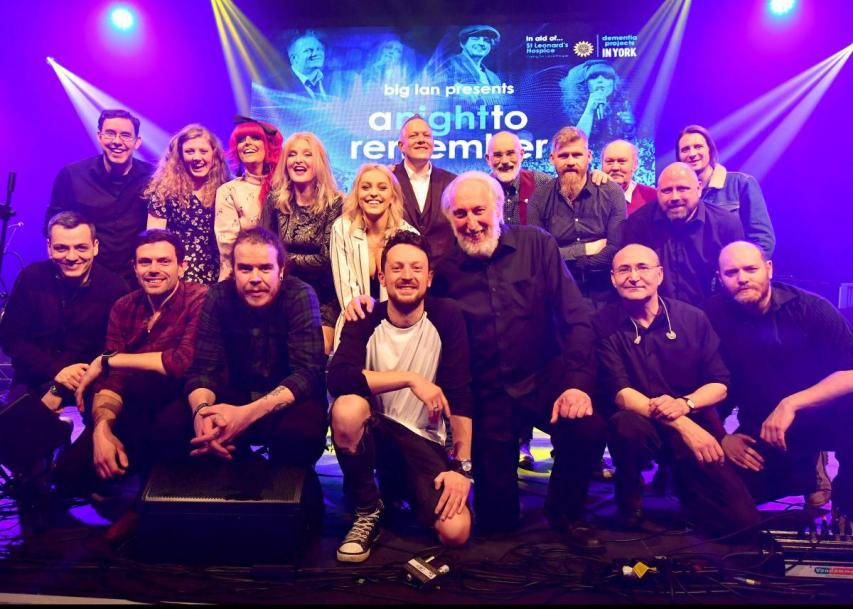 Artists who gave some excellent cover versions on the night included Heather Findlay, Jess Steel, Chris Helme (off of the Seahorses), Graham Hodge, Boss Caine,  Beth McCarthy, Annie D, Kieran O’Malley, These Jaded Streets and the inimitable Las Vegas Ken. Backing them all was a superb band of musicians led by George Hall. Big Ian was a fabulous host on the night and he also gave us some top tunes himself. He had us all loudly singing along at the end of the evening to the Joe Cocker arrangement of “With A Little Help From My Friends“, but for me Ian knocked the ball out of the park with a stunningly soulful take on Rag ‘n’ Bone Man‘s “Human”. The night was kicked off with a rather amusing and very supportive video from Ricky Wilson off of the Kaiser Chiefs there was another brilliant video later from DIY SOS kingpin Nick Knowles. That one certainly had a number of the women around me swooning. But the best videos were from people who will benefit directly from the money raised; the Bereaved Children Support Group told us all about the impact made on their lives by the group’s founder Jo Cole. “I Just Love Maltesers” helped explain how we should treat people living with dementia, through what was an amusing and very emotional clip.

Jess Steel put on her full Dusty Springfield vocals for a storming “Son Of A Preacher Man” and Ian’s daughter Annie showed her vocals could one day be a great match for her Dad’s with “This Is Me” from the current film ‘The Greatest Showman’. Boss Caine a.k.a. the very talented Dan Lucas interpreted two classic songs in a way that only he could. His “Tiny Dancer” was a great cover of a truly great song. Elton would have been very happy with that. Chris Helme was joined by Alan Leach off of Shed Seven on Drum’s for a chilled out sing along of “Que Sera Sera” and an electrifying “Never Tear Us Apart”, the INXS song. Chris Leach’s daughter was playing keyboards for them. We were also treated to a couple of songs from Archbishop Holgate’s School‘s production of ‘School Of Rock’. This had been postponed at the school by the snow, so Big Ian gave these lads and lasses a great opportunity to play to a massive crowd. Those kids took it well, I particularly enjoyed “Stick It To The Man”. Then of course how could Las Vegas Ken’s rendition of “My Old Man’s A Dustman” failed to have got you singing and dancing? I hurt my throat hollering that chorus. But my personal favourite highlight, and it was a close thing with so many excellent artists performing, was These Jaded Streets epic remodelling of Paul Simon’s “You Can Call Me Al”.

If you couldn’t make it on the night it is not too late to contribute to these fantastic causes, just click here and give whatever you can as Big Ian himself said on the night, don’t have that takeaway, give the pizza a miss and give a few quid here!