Well isn’t the Crescent turning into a fab venue. Tonight in a show put together by the talented Mr Dean Shakespeare of Under The Influence we had one of the most hyped bands in ages headlining ; those delightful lads from Cabbage. This would make it four times that I had seen them live, so what did I think of them this time? Well dear reader you will need to read on to find out, because I need to tell you about the excellent support acts first. The Grimm Twins took to the stage before anyone else and sadly the early crowd held back for far too long for such a stunning band. They are punk and post punk rolled into one. They contain a pinch of the Fall and a dash of the Buzzcocks which given that their DNA is close geographically, they are from Macclesfield, I am not surprised. Their song “Generation Z” is a venerable and honourable anthem for this bands generation. After hearing this I would be happy to hand over the mantle as my baby boomer generation have royally fucked things up. Their closing number “Theme Of The Grimm” is a top tune, it is deep, meaningful, powerful, special and anthemic. Definitely a band to watch out for.

The next band up were She Drew The Gun who to me appeared to be influenced by everything and nothing at the same time, this is no criticism they are a wonderful and truly original band. They are a band with a conscience and bucket loads of passion. Imagine Dick Dale backing a torch singer or Kate Tempest fronting early Roxy Music and this will give you just a small insight into exactly how good She Drew The Gun are. If you saw them at the Crescent tonight and you didn’t become a fan then I seriously believe that you need to have your musical taste examined! 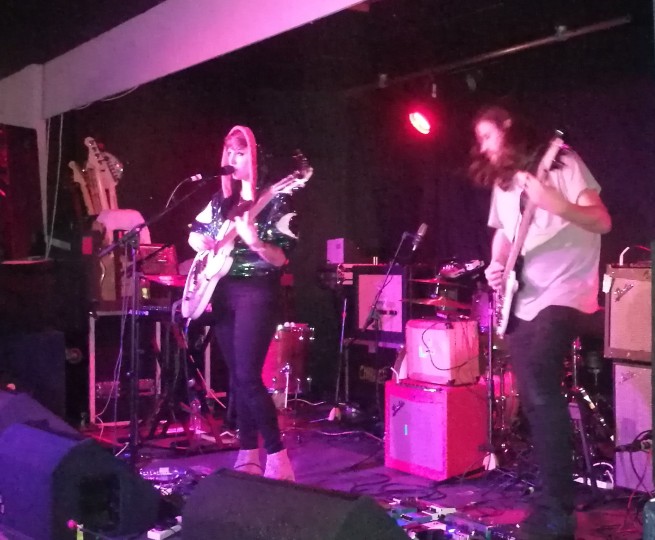 Finally it was time for the main attraction and one of your five a day, it is only the mighty Cabbage! This is the fourth time that I have experienced the band known as Cabbage and this was the first time that I had seen them outside of a festival. So this was very much their own crowd and oh boy did they whip us into a frenzy. Cabbage play punk, funk, pop, post punk and many other styles in between but they are nigh on impossible to drop into a genre. They are bombastic, lovingly chaotic and they carry off a healthy dollop of arrogance too. We were treated to some proper choice cuts from their new album ‘Nihilistic Glamour Shots’ and some of the finest songs from their ever-expanding repertoire. They were at their explosive best for “Arms of Pleonexia” and “Gibraltar Ape” was a towering masterpiece that shook the room, but to be fair I was standing right next to the speaker stack! From their earlier songs “Uber Capitalist Death Trade”, “Terrorist Synthesizer” and “Dinner Lady” were particular highlights for me. On top of that who can resist the genius that is “Necroflat in the Palace”. After seeing them at the Latitude Festival last year I made a prediction that they would headline a major festival in three years. I stand by that and hopefully it will be by or before 2020! Get yourself out to see Cabbage now before they start playing just the enormodomes! 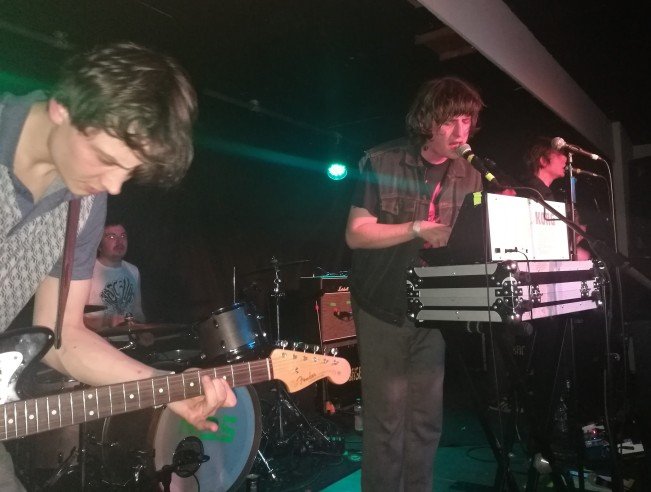 It was also great to catch up with Simon P; kingpin of Northern Radar, Joe Coates; Head Honcho of Please Please You and Joe and Jared from one of my most favourite bands the rather awesome Avalanche Party! so as gig nights go this one was among the very best!

Public service announcement – all photographs emanated from by cheap little android phone and the videos were all discovered on YouTube.