“For you things, seem to turn out right I wish they’d only happen to me instead” December 6, 2018

I guess it must be my age in that so many people who were a part of my younger years have left us. I am sure many of you are now aware that northern punk stalwart Pete Shelley of the Buzzcocks passed away at just 63 after a suspected heart attack. The Buzzcocks were a classic British band in so many ways. They did not ape the US vocalisation of some, they stuck to their guns, remembered their roots and produced some amazing music along the way. Contrary to popular belief the band were probably not named after a slang term for a vibrator. But supposedly about the buzz or the happening with cock being English north-western slang for mate, pal or friend. The band formed in Bolton in 1976 in a coming together of Pete Shelley and Howard Devoto. Both became early fans of the Sex Pistols, travelling down to London to see them play in February 1976. After that Devoto and Shelley were the instigators of the Pistols now infamous and iconic show at Manchester’s Lesser Free Trade Hall in June 1976. The pair was unable to get a band together to get on the bill for that gig, but with the addition of Steve Diggle and John Maher the Buzzcocks opened the second Sex Pistols Manchester show in July 1976. By the end of that year they had recorded and released their ‘Spiral Scratch’ EP. The following year they signed for the United Artists label and released the punk classic “Orgasm Addict” a song that was very risqué for the time.

The Buzzcocks embraced punks DIY attitude and principles even though they signed to a major label. the band disbanded in 1981 but got back together later that decade. Shelley and Diggle were the constant members overseeing a number of personnel changes. Over the years the Buzzcocks released nine studio albums and a string of compilations. For me they were best remembered as an incredible singles band. How can anyone not love “What Do I Get” and their biggest hit (a UK number 12 in 1978) “Ever Fallen In Love (With Someone You Shouldn’t’ve)”. I was lucky enough to see them a couple of times in London in 1978 and then once again in York on the Buzzcocks 40 tour just a few years ago. My thoughts are with Pete Shelley’s family, friends and fans, he will be very sadly missed. RIP Pete Shelley. 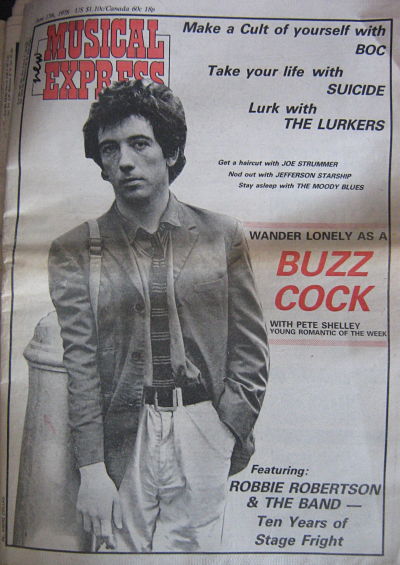