How do Festival weekends seem to go so quickly? This was by far the hottest of my three days at the 2019 Leeds Festival, well in terms of temperature at least. Were the bands as hot in terms of performance? Well, dear reader, you will need to read on to find out. One of the big rumours of the day was that Frank Turner would be playing a secret set. There was a gap on the Pit/ Lock Up Stage from midday to 1 o’clock, so I came in extra early to be there only to find that it was just a rumour based on the fact that Frank had played a couple of album launch sets at the Brudenell in Leeds the night before. Hopefully, Mr Turner will be playing at the festival next year. My first action of the day was to see Amsterdam’s Pip Blom on the BBC Radio 1 Stage. The band name is taken from the name of the bandleader who writes and produces all of the band’s fabulous indie-pop classics. They are like a reincarnation of the Breeders with a very strong power-pop direction. Check out their album ‘Boat’ on Heavenly Recordings.

Next, it was a quick dash across to the Festival Republic Stage to see Sheffield’s Oddity Road. They hit you with harmonic, melodious rock songs that would grace the canon of many successful bands. The Foo Fighters and the Killers to name just a couple. Oddity Road are purveyors of finely crafted and intelligently performed power-pop classics in waiting. Remarkably they are currently unsigned, but I doubt that will last for too much longer. I made a dash across to the Pit/ Lock Up stage with great excitement and anticipation as it was time for Queen Zee. But our hopes were dashed as the band had to pull out for medical reasons. I hope that there was a speedy recovering and that this amazing band will be back next year. 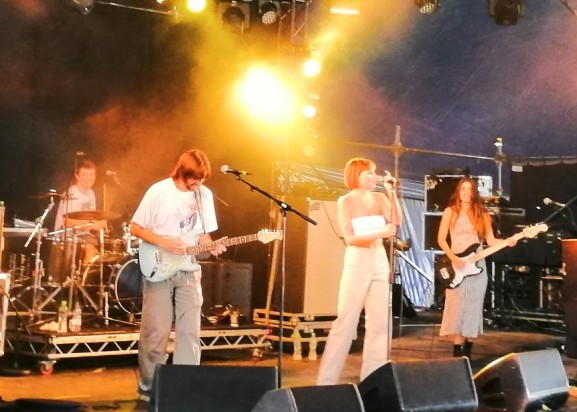 The Festival Republic Stage next played host to Basque country rock band Belako. This band are incredibly hard-edged with a planet splitting volcanic shriek of a rock vocal and I mean that in a good way. I heard shades of peak-era Siouxse and the Banshees in Belako. Definitely a band to keep an eye out for. I made my first visit to the Main Stage today to catch Against The Current. This charming, talented and well-rehearsed band from Poughkeepsie in the USA smashed it with a great set. This bunch epitomise perfect high powered pop with vocal hooks and riffs aplenty accompanied by some really top tunes. They have more energy than Duracell’s finest products! Back to the Festival Republic for a band that has been highly recommended to me by quite a few people, Sophie and the Giants. The band hail from Sheffield and while I don’t believe that they are real giants they do have some gigantic tunes with huge sweeping choruses that attach to your neural network like a stubborn and persistent beanstalk. Sophie Scott’s voice has an incredible range and volume and a gorgeous tonal quality. She could easily match the vocal talents of Florence Welch. 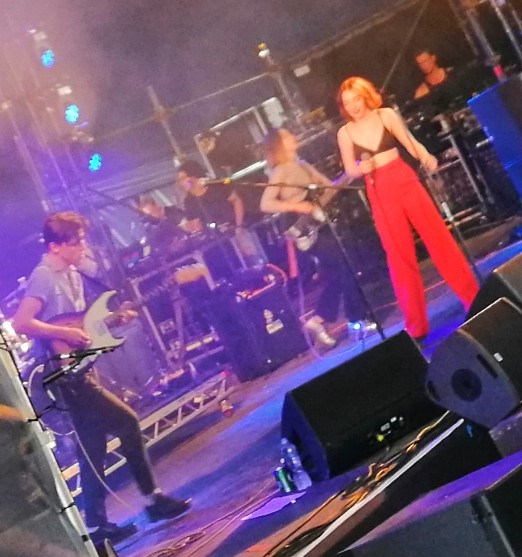 Sophie and the Giants

I rushed over to the BBC Radio 1 Stage for rising British rapper Slowthai and oh boy was it worth running in that heat. After being so disappointed by Gunna and Juice WRLD over the past couple of days Slowthai. He singlehandedly restored my faith in rap as I thought that he might. He is a great performer and his words and cyphers are intelligent, challenging and at times works of genius. His album ‘Nothing Great About Britain’ is, for me, among the best releases of the year. The Pit/ Lock Up was home to Bad Nerves from Essex next. These boys play it hard and fast with 100 miles per hour riffery and spot on sneery punk vocals. Their tunes are reminiscent and worthy of early Strokes cuts. I sense influences from classic period Buzzcocks and Stiff Little Fingers. I heard them play their single “Radio Punk” here and that has since become one of my favourite songs of the moment.

The BBC Introducing Stage has been supremely good this year on my next visit to that stage I got to experience the delights of Charlotte, a 20-year-old from Hull, who possess one of the most soulful voices I have heard. Her style is at times similar to Adele, but with less of the shoutier elements. Charlotte has a really tight and funky band behind her too. This girl can go all the way and I hope that she does. The Japanese House were next up on the Festival Republic Stage. I am sure that they are not Japanese, nor are they a house, what they are is highly talented singer-songwriter Amber Bain from Buckinghamshire. She has songs with hypnotic harmonies and huge hooks. If you want to chill out on the hottest festival afternoon that I can remember then you need to do it to the Japanese House. The refreshingly beautiful symphonic flow of Bain’s songs is still washing over me.

I did not make too many trips to the Main Stage on Sunday but I wanted to be there to witness the first person born this century to have a US number one album with ‘When We All Fall Asleep, Where Do We Go?’ I am talking of course about the mercurial talent that is Billie Eilish. She is what a 21st-century superstar should be; an original talent, someone who does things her way and on top of that a truly engaging performer. She has sass, style and superb songs. I reckon she drew the biggest crowd of the weekend, the crowd went absolutely nuts for her. She will undoubtedly be back at this festival before too long. Have I been at the Pit/ Lock Up Stage more times than any other this year? It certainly feels like it, this time I was here for Blood Youth from Yorkshire. This bunch are heavier than Osmium and harder than Nuclear Pasta (a.k.a. the material that makes up a Neutron Star). Blood Youth wield the force to cause an earthquake in Hell by the power of their mountainous riffs alone. This band produced a wave of the heaviest hardcore heavy metal today and rocked the Pit/ Lock Up Tent almost out of its moorings! Take a listen to their current album ‘Starve’ it is something special and you will not be disappointed.

I stayed in the Pit/ Lock Up tent for the next act, an artist I knew next to nothing about, but I was intrigued. Just when I thought I had seen pretty much all there is to see at gigs and festivals during the last forty-seven years up comes Poppy, once known as Moriah Rose Pereira. This completely original LA artist shares a birthday with me, she was born the day that I turned 36. If you thought Lady Gaga was a bit ‘out there’ and strange then you have never come across Poppy. Is she an android? Well, she could be. This was perhaps one of the most spectacular sets that I have ever seen at one of the smaller stages at the Reading/ Leeds Festival! Poppy is like the sproglet of Max Headroom and Gwen Stefani with added alien DNA. Her band look like players in a rock star zombie film. The music is full-on heavy glam rock with a heavy nod to classic 60s girl group choruses in the vocals. Almost certainly my favourite act of the whole weekend. What was yours? I might have left after Poppy as nothing could really follow her, but I felt that I needed to stick around a little longer. Well, long enough to at least catch Twenty One Pilots. The boys opened with “Jumpsuit” which set the bar pretty high for the rest of their set. They managed to include a piece of the White Stripes “Seven Nation Army” within the live rendition of “Morph”, so I guess you could say that “Morph” morphed. It was an electrifying set, highlights for me were “My Blood” and “Cut My Lip”. But the real crowd-pleaser was a cover of the Oasis classic “Don’t Look Back In Anger” for which they were joined on stage by fellow co headliner Post Malone. I was more than satisfied to end my festival with such a great set from Twenty One Pilots. Apologies to Post Malone, the heat pretty much wasted me and I am not a big Post Malone fan! Leeds Festival I will see you again in 2020.

I know that they didn’t actually play the Leeds Festival, but they are a great band, so here is a sneaky Queen Zee video. Get well soon and we’ll see you next time!

All the photos apart from the Festival Line Up poster were taken on my cheap android phone. The videos were all found on YouTube, if one of them is yours and you would like a credit or for me to remove it please let me know.