Another intimate gig at the fabulous Vinyl Cafe in York, this time Leeds band Apollo Junction headlined with an acoustic set. But more about them later as there were also a couple of pretty decent support acts. First up was singer-songwriter Toby Burton. He has a rich, almost baritone voice. His songs are story songs, almost exclusively sad stories. Highlights for me were “The Middle” and “Shining”. He has a new single, “All Night Long” out this month. In fact compared to all the other songs in his set this was moderately happy at times. He was also amusingly self-deprecating about his merch, which was CDs. He said that they made good coasters. I felt that I heard shades of another vocalist in his delivery and tone, it took me a while to think of who, but I can sense some Martin Rossiter vibes within Toby’s voice. I would really like to see Toby playing with a full band, I think it will give his songs greater depth and strength.

Next on stage were a band playing only their fourth gig, spookily enough I was at the third gig just the night before. I am talking about Grapefruit Eyes, a band that I can now genuinely say that I have seen 50% of all their gigs so far! Regular readers will know that I am a fan of this band and their previous incarnation, Neon Salmon. The music is built using samples, drum machine sounds, guitar, bass and for this show softer drums. George’s voice gets better every time and sometimes pitches towards Thom Yorke at his finest. Grapefruit Eyes certainly appear a bit more experimental than Neon Salmon. They fuse prog, dance, chill-out, and rock into their musical melting pot and from that they cook up a sound like no other bands around at the moment. They can move from slightly left-field Pink Floyd style to pre-commercial George Benson (around the time of “Breezin'”) in a heartbeat. I can also sense a bit of Edwyn Collins and Orange Juice in their vibe too. This will definitely not be the last time I see Grapefruit Eyes! 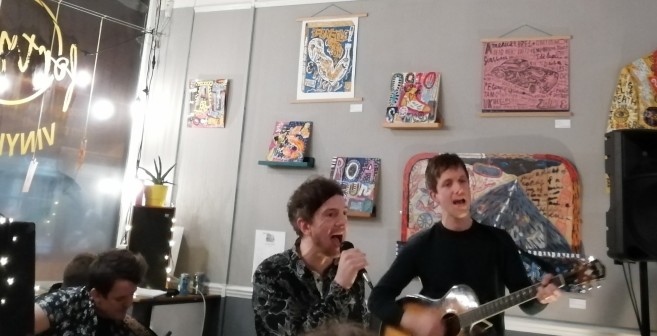 Finally, it was time for Apollo Junction to strut their acoustic stuff. I have never seen a five-piece band play this venue, so I was a little concerned as to how they would all fit in, but in the end, they did fit, a looked a bit cosy at times though. Jamie has a great voice that contains passion, soul and power. They did a cracking cover of the Who’s “Substitute” with some moderate audience participation, stronger from those of us who were around when that single was originally released! We had some real full-throated crowd singalong with an epic take on “Always Remember” which included Jamie wandering into the crowd. The band aired some new songs and judging from how they sounded on the night “Are You Happy” and “Time Is Coming Around” show great promise for the next Apollo Junction album. I should also publicly apologise to the band for not getting around to reviewing their first album, ‘Mystery’ when it was released late last year. But let me state categorically that it really is a fucking awesome album that you need to check out! It is full of pulverising (in a good way) choruses and hooks, they take the best of the likes of New Order, Depeche Mode and ABC and make it their own The band’s “In Your Arms” currently soundtracks the BBC’s Football Focus show which is a proper achievement, not every band gets that kind of exposure. This was an amazing set by a truly talented band. Apollo Junction are heading upwards at speed and on the evidence of tonight, they will definitely be going much further! 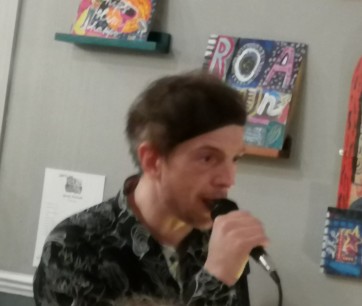