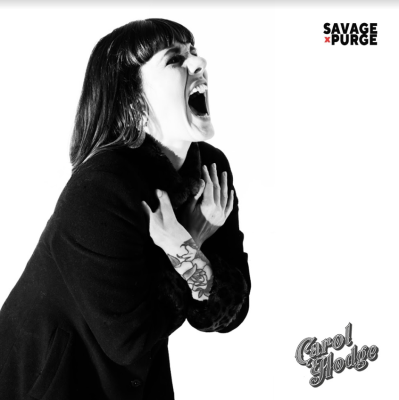 Huddersfield based UK singer-songwriter Carol Hodge is new to me but she has a classy and extensive musical pedigree. Many of you may know her for her work with Crass main man Steve Ignorant. Carol has provided keyboard and backing vocals on the tours for Steve’s acoustic project Slice Of Life for the past few years. She worked as a lead vocalist for Steve Ignorant’s Last Supper which saw her provide lead vocals on many Crass songs across the world. She is touring again with Mr. Ignorant this year too. Carol has been keyboard stalwart and ace backing vocalist touring with Texan rockers Ryan Hamilton And The Harlequin Ghosts (signed to Stevie Van Zandt’s Wicked Cool Records). She also makes occasional guest appearances on keys with The Membranes and The Ginger Wildheart Band.

Carol has recently finished recording her second album ‘Savage Purge’ a sophomore follow up to 2018’s ‘Hold On To That Flame’. It was produced by Dave Draper who has worked with Ginger Wildheart, Dodgy and The Professionals to name but a few. It hits the streets on 30th March, you can preorder it and get with the cool kids by clicking here. The album title was inspired partly by the Post World War II épuration sauvage that took place in France, in which many innocent women were tortured. Until I prepared for reviewing this album I must confess that I knew nothing of this, I do now! Click here to read more about it. Carol’s songs appear to be deep and emotional yet very accessible. The songs cover subjects that range from mental health to domestic abuse and alcoholism. But despite those dark subjects it still feels like an uplifting album. Louder Than War described Carol as “The Adele for people into radical politics…a UK 2018 equivalent to the Tapestry-era Carole King”, I can see why. Carol has a powerful voice which is at times enchanting, enthralling and at times hypnotising. She has the clarity of Karen Carpenter and I can hear elements of Patti Smith’s softer moments and a dash of Marcella Detroit.

Album opener “Stop Worrying Baby” is about living life on your own and not worrying whether you have found “the one”. The clarity piano sound on the track is reminiscent of Bruce Hornsby. There is wonderful dark passion and emotion contained in “Waving Not Drowning” and Carol sounds similar to Chrissie Hynde in the early days of the Pretenders. I have always believed that the first person you should love is yourself, because without that how can you love anyone else or how can anyone else really love you? For me “I Still Love Me” is about that and maybe the importance of maintaining strong self-esteem. On top of that the song rocks from the kick-off. “In Case Of Emergency” is a gorgeous ballad about a failed and abusive relationship. But through it all, I can sense Carol’s inner strength, one of the most honest songs that I have heard in a while. I always loved Gene and I can really imagine Martin Rossiter covering “Send Me Someone”, which has one of the best lyrics on the album, although it is an extremely difficult choice. I love the 80’s synth sounds on “Stopped Believing In You” it adds a jaunty positive vibe to a song which is at times dark and the damage of alcoholism, but mostly positive. The double-tracked vocals and almost acapella moments on “Semi-Colon” made the hairs on the back of my neck stand on end, not many songs have done that to me, obviously, I mean that in a good way! The album closes with “Let Gravity Win” a song which is one of the best takes on getting older that I have ever heard. There are a couple of lines in there that sum up how I feel about aging; “I watch with clouded avarice as youth escapes my grip. But I won’t stop caring passionately for the young and hip”. That may have to become my new mantra! This is a great album with not a duff track in sight, click here to preorder, you need this album in your life!