It was just a few days ago that the Everly Pregnant Brothers from Sheffield appeared in our Mayhem Virgins series, which is exclusively for bands and singers that we have never featured before. But now, just a short time later they feature again, courtesy of one of a number of gigs they are performing in celebration of their tenth anniversary. The show, promoted by the Gig Cartel, was at Fibbers in York, a venue that will sadly be closing down later this year. So, how good were Big Shaun and the boys? Well, you will need to read on to find out what I thought of them because first there is a pretty decent support band to mention. Also from Sheffield, this mob is called Spit N Strings. They describe themselves as Hip Hop, Indie and Acoustic. To that, I would add folk, rock, and comedy. They are an incredibly entertaining band with overflowing energy, enthusiasm and humour. Tom, James, Dave, and Chris had me bouncing, laughing and smiling from the off. Often English rap and rappers just don’t work, but Spit N Strings pull it off with style! Particular highlights for me were “Radio Four” which is a rib-splitting diatribe about getting old, which most of the audience, including me, are. “Festival” is perhaps the best description of music festivals that there has ever been. Then there is the stone cold classic view of life in supermarkets like Morrisons late in the evening for yellow sticker shopping, “Feeding Time”. But my favourite was “Nobheads”, why? Well we are all a bit of a nobhead at times, aren’t we? The nearest comparison I can find for this band is probably Goldie Looking Chain, but I reckon Spit N Strings are much better and deserve a wider audience, check them out on Spotify by clicking here. Then go tell your mates about them. 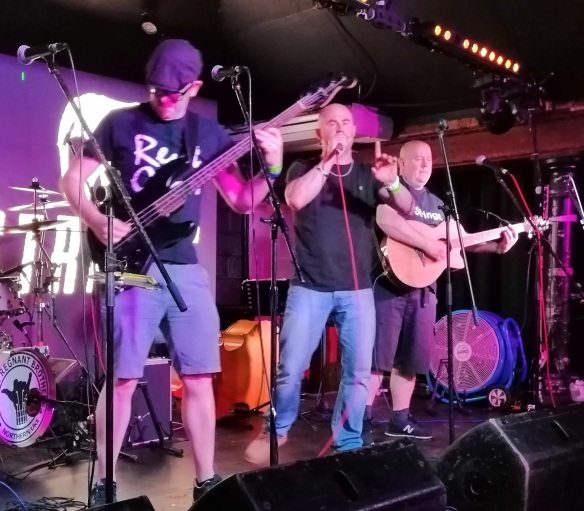 We were spoilt for choice for gigs in York on Saturday. Was it going to be Rod Stewart at the racecourse or the Everly Pregnant Brothers at Fibbers? Well, it was no contest for me, it was always going to be a win for the Everly Pregnant Brothers. On paper ukeleles, drums, double bass, kazoo and cleverly crafted comedy lyrics to classic songs shouldn’t work, but live and on record, it all comes together brilliantly. Big Shaun took to the stage with a newly minted purple mohawk cut and helped drive the band through a set that contained all their classics. It kicked off with “Pork Pie” ( possibly more familiar as Blur’s “Parklife”)and the humour, banter, singalongs and piss-taking never let up from there. I will never be able to listen to the Cure’s “Love Cats” again without laughing out loud after hearing the epic “Fat Twat” where the audience participation on the chorus was so much fun, “la la la lardy bastard” indeed. The same feeling goes for R.E.M’s “Losing My Religion” once you have heard the Brothers “Losing My Pigeon”. I reckon the reworked lyrics are better! “Big Lump Of Hash” almost had me choking on my pint. If you’re a Bowie fan the Everly Pregnant Brothers take on “Ziggy Stardust”, “Reggie Sprayed Me Car” will make you sing the new lyrics forever, I reckon the Dame, who had a great sense of humour, would have loved this take on one of his most iconic songs. Blur’s “Tender” is turned into a hilarious ode to cyclists and the perils of getting saddle sore. Big Shaun introduced a lady from the audience to take the female verse in “Dun’t Tha Want Me”. She got the “buffer in Mappin and Webb” part spot on, but fluffed the unchanged parts! I think her name was Karen and to quote Big Shaun “Karen, you had one job….” The next three songs are those that can never be left out of an Everly Pregnant Brothers set; “Hendo’s”, “No Oven, No Pie” and “Chip Pan”. These three had the audience including me almost taking the Fibbers roof off with our amazing (well that might be stretching it) singing. It took me ten years but I am so glad that I now have the Everly Pregnant Brothers in my life. A great band and this was an awesome show. 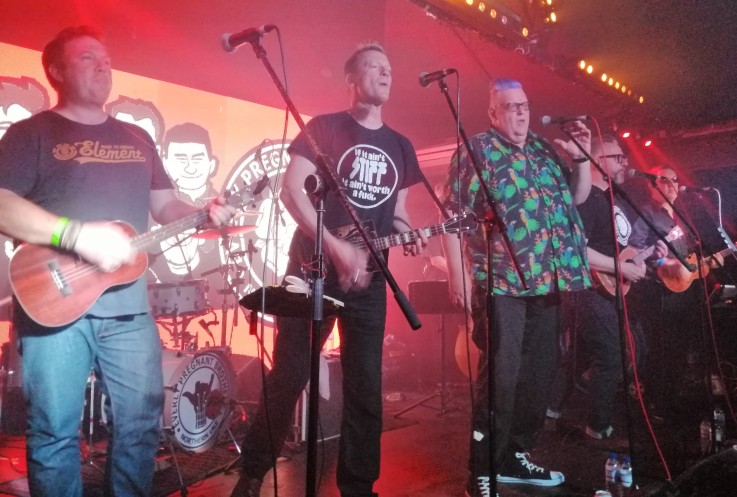 As a soft southerner who has lived in the north for twelve years, I had to do my research on Hendo’s, for those of you not in the know it is Henderson’s Relish! I may have to replace my Worcester Sauce now!

Public Service Announcement: All photos, apart from the gig poster were taken using my cheap android phone. The videos were sourced from YouTube. If any of the latter are yours and you would either like a credit or to have them removed please let me know. 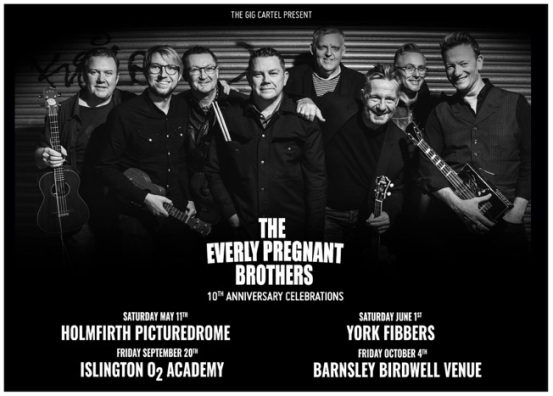 I love discovering great new bands or sometimes great bands that are new to me. Well, the wonderfully named Everly Pregnant Brothers are new to me and that is why they are the next act to feature in the Mayhem Virgins series.  They are about to celebrate their tenth, yes tenth, anniversary with a headline show at Fibbers in York on June 1st. Their brand of twisted Yorkshire parody and comedy is truly unique and bloody hilarious and I am so disappointed that I have only just discovered them. But the voyage of discovery through their back catalogue and YouTube videos has frankly put me in an even more positive mood than usual! A band that makes amusingly clever covers (obviously with comedic lyrics) of classics is the sort of thing that would appeal to me, but a band whose main instruments are ukeleles and a kazoo would normally not be my thing. But the Everly Pregnant brothers make that combination work, even for me.

The band formed in Sheffield after a drunken dare by Pete Mckee and Richard Bailey in 2009. The success of the dare prompted the
pair to draught in a bunch of disparate chaps who had three things in common, the love of beer, ukuleles and having a laugh. Pete Mckee stated in a recent interview that “We weren’t supposed to last ten days! We originally got together for a one-off gig and the buggers insisted
we carry on…”  Frontman Shaun Doane added, “I can honestly say I didn’t think any further than the first two shows we ever did, it was already fun and I hoped it would continue but I was quite prepared to do those two shows at Art in the Gardens and then go back to my musical retirement home!” Well, I for one am eternally grateful that this lot never returned to that musical retirement home. Bring on the next ten years, please. Take a listen now to some ace and rib-splitting covers from many serious artists including some of Sheffield’s finest such as the Human League and Pulp. My current favourites are “No Oven, No Pie” and “Chav World”. Click here to check them out on Spotify.

Public service announcement: all the pictures and videos were sourced via Google and YouTube. If any of them are yours and you would like a credit or want them removed please let me know.