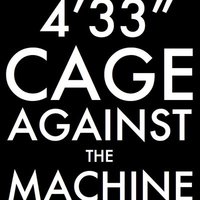 OK people after last year you know exactly how to stop the X Factor winner making it to the UK number one spot over Christmas this year. Last time around pop muppet Joe McElderry was beaten to the Christmas number one by the brilliant “Killing In The Name Of” by Rage Against The Machine. This year there is another opportunity to prevent the X Factor lording over the charts once again.

This time it is going to be ” 4’33” ” a recreation of John Cage’s most famous avant-garde work. Well ok Emperor’s New Clothes time here, it is in fact 4 minutes and 33 seconds of silence. This may sound somewhat mental, however by downloading the piece you will be helping a number of charities including, Calm, a service for young men at risk of suicide, the British Tinnitus Association, Youth Music, Nordoff Robbins Music Therapy and Sound & Music, a charity promoting challenging new music and sound art. On top of that you will dent the next X Factor Muppets progress.

If only he'd been clearer about his wish. He hadn't really wished for a 12 inch pianist had he?

Many artists have participated by errr….. recording their silence. Those include;  Fyfe Dangerfield off of the Guillemots, Unkle’s James Lavelle, Dan Le Sac vs. Scroobius Pip, some Kooks, Heaven 17, Matty off of the Infadels, Suggs off of Madness, Orbital, Pendulum and Billy Bragg. Pete Doherty apparently failed to turn up. Read the story here on the BBC News site. Join the Facebook campaign here and let’s make Cage Against The Machine the Christmas Number One this year!

By the way, I realise there is no real title to this post, but what did you expect?