Last weekend I accompanied the beautiful Catwoman to a free preview of the new film ‘The Social Network‘ at City Screen in York courtesy of the Guardian. It is based on the book ‘The Accidental Billionaires‘ which recounts the story of the birth of Facebook.

The script is tight, pacey and at times very, very funny indeed. The film’s strap line is ‘You don’t get to 500 million friends without making a few enemies’ and this is the focus of much of the film, particularly all the legal wranglings about whose idea it was. This largely focuses on the relationship between Mark Zuckerberg (Jesse Eisenberg) and his former partner Eduardo Saverin (Andrew Garfield) and his other battle with the Winklevoss brothers who he refers to rather amusingly as the Winklevi.

I never realised the part that Sean Parker, the guy who created Napster, played in the early days of Facebook. He is played incredibly well by none other than former Mickey Mouse Club star Justin Timberlake.

I suggest that you get yourself off of Facebook right now and go and see this movie, you won’t be disappointed! I can also confirm that JUSTWILLIAM1959, WITH JUST A HINT OF MAYHEM and CATWOMAN all ‘Like’ this movie.

As usual this is indeed a music blog so let’s mention some of that. The actual soundtrack was composed and performed by Trent Reznor (off of Nine Inch Nails) and Atticus Ross and it works really well. There are some excellent songs used during the film and you can find a few of them below; 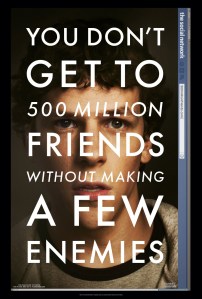