It’s me again people, I’m back with another one of those annoyingly intermittent blog posts. Actually they may well become more intermittent these days as I move back to being much more fully immersed in the corporate world, I start a new job next week. What will I be doing and who will I be working for? Well (and to those of you who truly believe that gullible really has been removed from the dictionary this next bit should be read with tongue in cheek!) I have searched far and wide to discover and produce an alternative cheap and environmentally friendly fuel to power our motor vehicles. I have left no stone unturned and no sting unstung. Indeed it is the sting thing that finally led me to my discovery. For some time I have been extracting the urine from Bumble Bees, well frankly anyone who wears a black and yellow hooped jumper deserves to have the piss taken out of them don’t you think? The extraction process is quite painful, well it is for the bees! Anyway I now have so much of the stuff in the fridge that it’s beginning to curdle the milk, so it’s time to put some in the car and guess what…….. it works! It powered the mighty Volvo for around ten yards, yes I am now being fuelled by Bee Pee. So can you guess who I’ll be working for? 😉

You may be smiling now but just wait until the extraction starts!

I know that this is really supposed to be a music blog and this one isn’t even about bees either but this story was too good not to share. It’s about a cat called Henry who steals socks. Click here to read it on the Beeb.

So let’s start with the late great (those ever present l’s & g’s are here again) Elvis Aaron Presley, who had a hit with “I Got Stung” in 1958. A song so old it even has more wrinkles than me. The song was one of many that Elvis recorded during his National Service and was in fact on the flipside of “One Night”. some of you dedicated trivia fans probably know that the song also topped the UK charts during the 2005 reissues programme, indeed I have all those reissued singles, how sad am I? “I Got Stung” was written by Aaron Schroeder and David Hill but is was produced by Mike Stoller off of Leiber and Stoller. Jerry Leiber and Mike Stoller wrote a number of hits for Elvis, including “Jailhouse Rock” A young Phil Spector also worked with the pair in his early career in the music industry.

Elvis really swelled up after he got stung

Those of you that are older than me will remember that Arthur Askey recorded “The Bee Song” but did you know that he also starred in a 1944 movie called ‘Bees In Paradise’? Whilst it was set on a mysterious island in the South Atlantic (so not the Falklands then?) where men are regarded as disposable beings useful only for breeding purposes. The island is ruled by scantily clad warrior women. The story involves four airmen, including Arthur Askey, parachuting onto the island with Askey’s character becoming the object of desire for one of the native women played by Ann Shelton. Whilst the film may have been set on a tropical island it was actually filmed in Torquay.

That's not glasses that Arthur is wearing they're protective goggles

How could I do a post relating to Bees without mentioning Sting, well quite easily actually, but I won’t. Sting or Gordon Sumner to his nearest and dearest got his nickname after wearing a black and yellow hooped jumper when playing a gig with a jazz band, the Phoenix Jazzmen. As I said earlier anyone who wears a black and yellow hooped jumper deserves to have the piss taken out of them, I rest my case! Anyway here is Mr Sting with the fabulous “Englishman In New York” 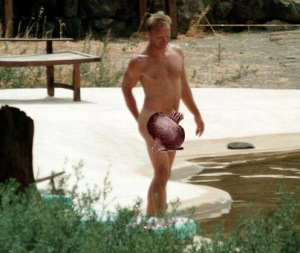 And without further ado let me end with a classic philosophical Monty Python song “Eric The Half A Bee” Enjoy! 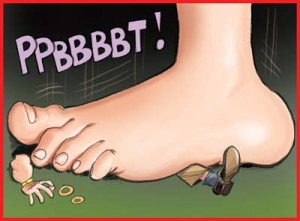