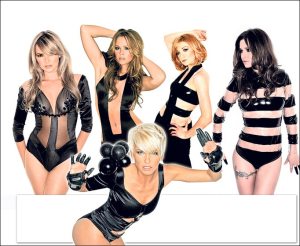 Girls Aloud will be reforming for a tour in 2013, to celebrate their 10th anniversary. Reforming? I wasn’t aware that they had broken up. I can’t say I am particularly excited by the prospect of the girls treading the boards again, are you? Well at least it is moderately better than those talentless morons Westlife. Clearly none of the girls off of Girls Aloud have set the world alight with their solo careers, so I think we can assume the ‘reunion’ is for money.

Nadine Coyle broke the news a couple of days ago. I suppose it will enable the nation’s sweetheart Cheryl to restart her career after the atrocious output from her solo albums and the X Factor US judging debacle. Hopefully Sarah Harding will be out of rehab too. Personally I reckon Nicola Roberts should stay away. Her first solo album was excellent, surely she doesn’t need the rest of them. So what do you think of the Girls Aloud reunion? 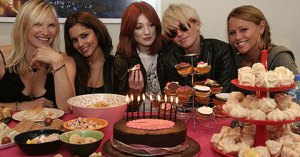 The girls as they might appear on their 40th anniversary tour.

How the hell do they keep slim with all those calories????

Hello once again dear readers and we’re passed the halfway mark to Chrimbo on my UK Christmas Number One Advent Calendar. It’s December 13th and todays treat is the first of the reality TV Pop Idol/ X Factor songs to take the Christmas number one spot. It was number one in Christmas 2002 and was begotten by ‘PopStars: The Rivals’ That show formed a boy band and a girl band and then put them into a Christmas chart battle. The winner by a long way was Girls Aloud with “Sound Of The Underground”. Can anyone remember the name of the losing boy band? it was One True Voice and their single was a double A side with “Sacred Trust/ After You’re Gone”. The girls were number one for four weeks that Christmas.

The girls would do anything to get a part in the next Pirates Of The Caribbean movie, even walk the plank!

Personally I kind of like that first Girls Aloud single, it’s still my favourite of theirs. Remember this was back in the days before Cheryl Cole  was Cheryl Cole and before she became the Nation’s Sweetheart and launched her lip syncing solo career. Back then she was just plain (well some would say not so plain!) Cheryl Tweedy. It’s funny how the little altercation in a nightclub toilet from those days seems to have been airbrushed from Cheryl history isn’t it? Anyway check out Lily Allen’s “Cheryl Tweedy” here.

The judges for Popstars: The Rivals were Pete Waterman, Gerri Halliwell and Louis Walsh. Will someone please explain how such a dipstick as Louis has survived so long in the business? I really don’t get it. As for Girls Aloud, whether you love them or hate them you have to admit that they are one of the few reality TV acts with any degree of longevity. Cheryl has now released two solo albums whilst Nadine Coyle has just released her first. Kimberley Walsh, Nicola Roberts and Sarah Harding have all tried their hands at acting as well.

No airbrushing here is there! 😉