“She used to be a girl of simple pleasures, a breath of spring to chase your blues away” Blog Advent Calendar Day 14 December 14, 2014

Ladies and gentlemen and those that aren’t quite sure it is now December 14th and that means that my Christmas advent blog posts for 2014 have reached Day 14 which in turn means that we are at the letter ‘N’. With that in mind I have decided to pick a band from Scotland for todays ABC of British bands entry. Please allow me to welcome the mighty Nazareth to this post.

The band formed in 1968 and the original members were Manny Charlton (guitar), Pete Agnew (bass), Darrell Sweet (drums) and Dan McCafferty (tonsil-shredding vocals). The band still tours although Pete Agnew is the only one of the original members still with the band. There are no middle east or biblical overtones to the band’s name. They are named after a town that is mentioned in the classic song “The Weight” from the Band. That town is Nazareth, Pennsylvania. The line is “I pulled in to Nazareth, I was feeling about half past dead” 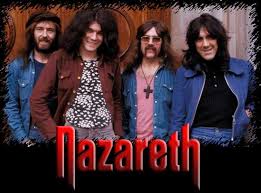 The band was probably at its commercial peak in the early 70s when they had three UK top 20 albums from 1973 to 1974. I used to own two of those on vinyl; ‘Razamanaz’ and ‘Loud ‘N’ Proud‘. They also reached the top 20 of the album charts in Norway six times between 1980 and 1989. Their latest album ‘Rock ‘N’ Roll Telephone’ has charted in four countries this year; Germany, Switzerland, Sweden and Austria. This is probably the last Nazareth album to feature McCafferty’s vocals as he retired due to ill-health last year.

Their biggest success in the UK singles chart was with “Broken Down Angel” which peaked at number 9 in 1973. Their cover of Joni Mitchell‘s “This Flight Tonight” made it to number one in Germany that same year. In 1975 they released a cover version of the classic ballad “Love Hurts” it made it to the top of the charts in Canada and South Africa. Dan McCafferty has released a few solo recordings over the years and his cover of the Rolling Stones “Out Of Time” almost made the UK top 40 in 1975, stalling at number 41, I used to have a vinyl copy of that too. In 1994 Guns ‘N’ Roses covered Nazareth’s “Hair Of The Dog” on their covers album ‘The Spaghetti Incident’. Supposedly Nazareth had previously turned down an invite to play at Axl Rose‘s wedding. They might not have entertained guests at Mr Rose’s wedding, but you can enjoy Nazareth now.