It’s the 22nd December and I reckon some kids can already hear the reindeer pulling hard on the old bearded weird one’s sleigh. That means of course that we are now up to Day 22 of this years advent calendar blog posts. The 22nd letter of the alphabet is ‘V’ so todays entry in the ABC of British bands is Visage.

Visage were formed in 1978 by Steve Strange and Rusty Egan after the pair had hosted club nights at the Blitz night club in London. They were really keen to find new music to play to their paying punters and finally they opted on producing their own. Egan recruited Midge Ure who he had worked with in the Rich Kids and the three of them recorded a cover of the Zager and Evans one hit wonder from 1969, “In The Year 2525”. The band’s line-up was then enhanced with keyboard player Billy Currie off of Ultravox and three former members of Magazine; John McGeoch, Barry Adamson and Dave Formula. 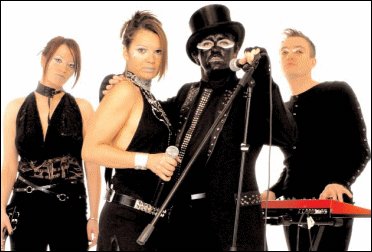 Their first album, entitled ‘Visage’ was released in November 1980. It made the top 20 in Austria, France, New Zealand and the UK. It also climbed to the top of the German album charts. The band’s highest charting album in the UK was 1982’s ‘The Anvil’ which reached number 6. “Tar” was their first single and it failed to chart when released in 1979. However the second single was “Fade To Grey” which was a hit across the world. It made the top ten in Austria, France, Italy, Belgium, New Zealand, Ireland and the UK. It hit the number one spot in Germany and Switzerland. None of their other singles have been anywhere near as successful.

Earlier this month the band released an album called ‘Orchestral’ which has reworkings of their best songs by a symphony orchestra. In 2009 Rusty Egan and Steve Strange appeared in Living TV’s ‘Pop Goes The Band’ where former bands are given a make over and return the favour by undertaking a one-off performance. Strange also appeared in an episode of classic TV series ‘Ashes To ashes’ playing “Fade To Grey” in the Blitz club with Visage II keyboard player Sandrine Gouriou. That episode was set in 1981. Steve can also be seen, along with other Blitz regulars, in the 1980 video for David Bowie’s UK number one, “Ashes To Ashes”. Now it’s time for you to relive those Blitz days and maybe get yourself blitzed with eggnog while listening to Visage.

“She used to be a girl of simple pleasures, a breath of spring to chase your blues away” Blog Advent Calendar Day 14 December 14, 2014

Ladies and gentlemen and those that aren’t quite sure it is now December 14th and that means that my Christmas advent blog posts for 2014 have reached Day 14 which in turn means that we are at the letter ‘N’. With that in mind I have decided to pick a band from Scotland for todays ABC of British bands entry. Please allow me to welcome the mighty Nazareth to this post.

The band formed in 1968 and the original members were Manny Charlton (guitar), Pete Agnew (bass), Darrell Sweet (drums) and Dan McCafferty (tonsil-shredding vocals). The band still tours although Pete Agnew is the only one of the original members still with the band. There are no middle east or biblical overtones to the band’s name. They are named after a town that is mentioned in the classic song “The Weight” from the Band. That town is Nazareth, Pennsylvania. The line is “I pulled in to Nazareth, I was feeling about half past dead”

The band was probably at its commercial peak in the early 70s when they had three UK top 20 albums from 1973 to 1974. I used to own two of those on vinyl; ‘Razamanaz’ and ‘Loud ‘N’ Proud‘. They also reached the top 20 of the album charts in Norway six times between 1980 and 1989. Their latest album ‘Rock ‘N’ Roll Telephone’ has charted in four countries this year; Germany, Switzerland, Sweden and Austria. This is probably the last Nazareth album to feature McCafferty’s vocals as he retired due to ill-health last year. 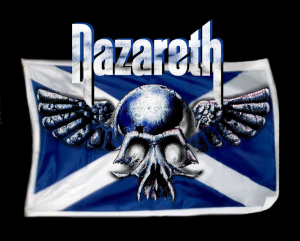 Their biggest success in the UK singles chart was with “Broken Down Angel” which peaked at number 9 in 1973. Their cover of Joni Mitchell‘s “This Flight Tonight” made it to number one in Germany that same year. In 1975 they released a cover version of the classic ballad “Love Hurts” it made it to the top of the charts in Canada and South Africa. Dan McCafferty has released a few solo recordings over the years and his cover of the Rolling Stones “Out Of Time” almost made the UK top 40 in 1975, stalling at number 41, I used to have a vinyl copy of that too. In 1994 Guns ‘N’ Roses covered Nazareth’s “Hair Of The Dog” on their covers album ‘The Spaghetti Incident’. Supposedly Nazareth had previously turned down an invite to play at Axl Rose‘s wedding. They might not have entertained guests at Mr Rose’s wedding, but you can enjoy Nazareth now.

“I get nervous in the New York City Streets, where my legacy treads” Blog Advent Calendar Day 10 December 10, 2014

Already we’re into double figures in December. How did it get to become December 10th so quickly? Anyway that means that it is now Day ten in my advent calendar blog posts. The theme this year is the ABC of British Bands for those of you who are not regular readers? What’s that I hear you say? You’re not a regular reader? In that case feel free to sign up and join the millions of others who read this blog everyday! OK so I exaggerated, sign up and join the few hundred that come here everyday. More importantly join the 700+ who actually follow it. December 10th means it’s day 10, which in turn means that we have reached the letter ‘J’. Who will it be? That’s easy, it’s Jamiroquai.

The band was formed in 1992. The lead singer and main man of the band is Jason Luis Cheetham, although I’m sure that you know him better as the crazy hat wearing Jay Kay. His mother Karen Kay was a television personality in the UK and a cabaret singer. Jay Kay originally started the band along with Toby Smith, Stuart Zender, Nick Van Gelder and Wallis Buchanan. They played keyboards, bass, drums and didgeridoo respectively. Has there ever been another British band that featured a didgeridoo player? Well let’s not count disgraceful kiddie fiddler any longer. The band’s name comes from an amalgamation of jam session and the Iroquois tribe of North America.

Some of Jay Kay’s hats were made by his mother and emulating her TV career he has also appeared on many TV shows including Top Gear, Strictly Come Dancing, The Naked Chef and the X-Factor. The band had three UK number one albums between 1993 and 2001. Their albums have also hit the top of the charts in Mexico, Italy, Germany, Netherlands, Switzerland, Austria and in the US Dance Chart. Their only UK number on single so far has been “Deeper Underground” from 1998. The song appeared on the soundtrack for that years ‘Godzilla’ film. They have been very popular across Europe and have had number one singles in four other countries in addition to the UK. They also climbed to the top of the US Dance Singles chart an impressive five times between 1994 and 2006.

Now it is time for you to enjoy a selection of classic Jamiroquai cuts. I hope that you enjoy them.

The UK number one single this week is “Loca People” by Spanish DJ Sak Noel. It has already made the top spot in Denmark, Holland and Belgium and top 5 in Sweden, Switzerland and Austria. It seems to be the first holiday hit in ages that has hammered the UK charts after getting played all over Europe. Frankly it’s a lot better than some of the crap that achieved the same in the 70s. Does anyone remember “Y Viva Espana”?

The vocal and indeed the superb ‘what the fuck’ line is delivered by Esthera Sarita. I’d love to hear your thoughts on the track, personally I’m loving it!