I couldn’t let the 40th anniversary of the release of Bowie‘s classic 1972 album ‘The Rise And Fall Of Ziggy Stardust And The Spiders From Mars‘ go unmentioned could I? It will be 40 years old on June 6th and of course being the Bowie fanatic that I am the vinyl reissue which comes with a DVD including some unreleased mixes is winging its way to me as I type. Bowie has said in the early 70s that the Ziggy album was a concept album, personally I don’t really see that, but that doesn’t make it any less of an album.

How many of you own at least one version of Bowie’s Ziggy album? lots of you I hope and if you don’t own it what’s keeping you, go out and buy it, download it, borrow it or steal it now! The album took just no more than 10 days to record, which by todays standards is faster than the speed of sound and light, or perhaps sound and vision, (get it?) combined. 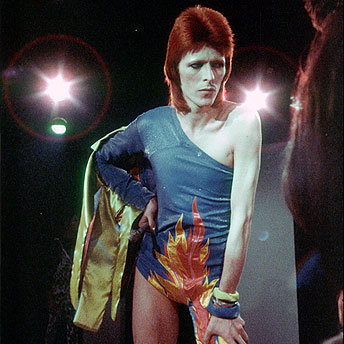 So, as I’m sure you have heard the album many times I thought I’d present it in a slightly different way, by giving you all the tracks in their original order but performed by different artists. Some whom you may have heard of and others you may not have. But just to make sure you don’t miss out on the Dame himself I have tagged on two cover versions that might have made it onto the album but didn’t. The covers track listing is shown below. PLAY LOUD and Enjoy!

“Hang On To Yourself” – Charles De Goal

Now it’s time for Dave does Chuck and Jacques or Bowie does Berry and Brel!

Bowie has a message for MC Hammer about big trousers……”U can’t touch these!”

According to a recent report in the UK tabloid the Daily Mail (so only a small chance it’s true) Ziggy Stardust is about to be honoured with a plaque in London. In the year that marks the 40th anniversary of the release of what many consider Bowie‘s finest moment it seems that the powers that be may be ready to give Ziggy a commemorative plaque.

Note that this would be very special as they are not awarded to living people. But it’s not a Bowie plaque it is most definitely to honour the Ziggy character. It will be placed in Heddon Street where the cover pictures for ‘The Rise And Fall Of Ziggy Stardust And The Spiders From Mars‘ album were shot.

Can you think of any other fictitious characters from the rock world that should be honoured in the same way? The Kinks ‘Terry and Julie’ on Waterloo Bridge perhaps? 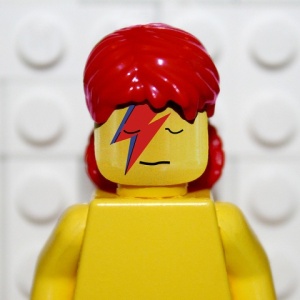 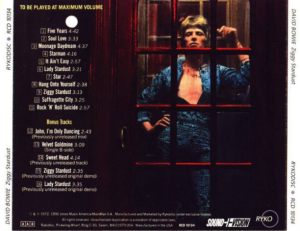 I will try to make this a relatively short post, mostly because it may be the last one I ever do (shades of Bowie’s 1973 Ziggy retirement there don’t you think?). Why might this be my last post? Well today is rapture day of course. A day when 200 million Christian believers will be swept up to heaven, while the rest of us remain down here suffering a hell on earth, which will apparently end on October 21st. An 89 year-old US preacher, Harold Camping, has predicted that Jesus will return to earth at 11pm UK time today. He will apparently be accompanied by earthquakes that roll around the world. Click here to read about the atheist rapture parties in the US.

Try as hard as you like Ermintrude but you won’t be raptured or looked after!

Personally I think this is complete crap, even more so given that Camping actually predicted the end of the world 17 years ago. But he says he wasn’t wrong and that his 1994 prediction was in fact a precursor to the main event. So rather than dwelling on delusional folks like him I thought I’d focus on what I think is a wonderfully amusing aspect of the whole story. it is said that only humans will be drawn up in the rapture, which means that all their pets will be left behind. But don’t fret pet lovers, there is a company called Eternal Earth-Bound Pets who will take care of your pets after you’ve caught the 11pm express service to heaven.

So clearly he cares for animals, just not your pets!

They operate in more than half the states in the US and will take care of your cats, dogs, small birds and small caged mammals for a bargain price of just $135 and an another $20 each for any additional pets that you have. Up to 250 people have already signed up even in the knowledge that no refunds are available. In four states they also offer the service for some larger animals such as horses. perhaps the best thing about this great deal is that it has a ten-year guarantee! So if Mr Camping is wrong again you still have ten years for him to get it right! How do they guarantee that post apocalyptic pet care? Well they guarantee that all their care teams are committed atheists, pet lovers and have no criminal record. Click here to check their website.

As I have said before this is a music blog so please enjoy the following songs before the end of the world. If my internet connection gets washed away with the rapture tonight I may not be able to post again, but I can promise you I will definitely still be on earth tomorrow 🙂

Today would have been the 80th birthday of Jerry Goldsmith who created the music for some classic TV series (Star Trek, Planet Of The Apes, The Man From U.N.C.L.E, Dr Kildare and the Waltons “G’night Jerry Boy!”). He died on July 21st 2004 from cancer aged 75. His film scores were nominated 18 times for Oscars, but he only won one, for “The Omen” So I will use this to show the long gone opening sequence to “The Man From U.N.C.L.E” Enjoy!

It is Roberta Flack’s 72nd birthday. She was born in 1937 in Black Mountain in the US, we just don’t have place names like that in the UK do we? What do we get? Slough, Grimsby and ………. Llanfairpwllgwyngyllgogerychwyrndrobwllllantysiliogogogoch. How about “is This The Way To Llanfairpwllgwyngyllgogerychwyrndrobwllllantysiliogogogoch”anyone?
Thanks to it’s use in the Clint Eastwood movie “Play Misty For Me” Flack’s version of the Ewan MacColl’s song “The First Time Ever I Saw Your Face” became a massive hit in 1972 and remained at the top of the US charts for 6 weeks. It was the longest run at the top of the US charts for a female singer since 1956 (That was “The Wayward Wind” by Gogi Grant). It went on to sell more than 2 million copies. Incidentally fact fans Ewan MacColl is the late great Kirsty MacColl’s Dad. Roberta was also credited as producer of her second album “Feel Like Makin’ Love” (don’t we all?) she used a great pseudonym, Rubina Flake.

On this day in 1972 David Bowie appeared at the Tolworth Toby Jug (It doesn’t really have the same ring as Carnegie Hall New York does it?) in London on the opening date of the Ziggy Stardust tour. Actually might have been the first official date but I seem to recall that he and the Spiders played a tour warm up gig at Friars in Aylesbury. Incidentally he played Carnegie Hall later that year, it was his first ever New York gig and it was a sell out.
I really wanted to see Mr Bowie on that tour when it came back to the UK in 1973. It would have been my first ever gig too. In fact the gig I might have gone to was to be the final Ziggy show “This is not only the last show of this tour, it’s also the last show we’ll ever do” was what he said that night. Anyway I wasn’t allowed to see Bowie as my Dad said he’s too bloody weird. In the end I did see my first gig later in 1973 it was the Jackson 5. Shortly before my Dad died in 2001 we had a rather amusing conversation about this in the sense of who turned out to be the most weird in the end? Clearly Jacko hands down (but down what exactly?) in my opinion. In the meantime check out The Dame himself singing the Jaques Brel song “My Death” at that last ever Ziggy gig. 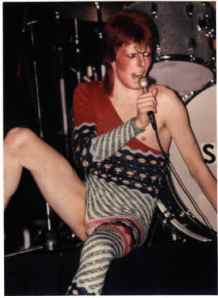 Weird? Well maybe my Dad had a point in those days LOL

On this day in 1977 The Clash began recording their first album at the CBS studios in London. It took just three weekends to record the 14 tracks, it was released in April that year. It’s probably still my favourite album from the punk period alongside “Never Mind The Bollocks” from the Sex Pistols. Following the albums release they embarked on the short lived “White Riot” tour, which started on 1st May and ended on 29th May. The support bands were the Jam and the Buzzcocks

Good cover, but I prefer the "London Calling" cover personally

And finally on this day in 1942 Glenn Miller became the first person to be awarded a Gold Disc for 1.2 million sales of “Chattanooga Choo Choo”. It was the number one song in the USA 7th December 1941 the day of the Japanese attack on Pearl Harbour. The song has often been the subject of what now seems a very old and tired and widely varied joke (like most of mine I hear you cry!), which makes a play on the lyrics, “Pardon me boy, is that the Chattanooga Choo Choo?” Rather than those words, the man walking with Roy Rogers says, “Pardon me Roy, is that the cat who chewed your new shoes?”