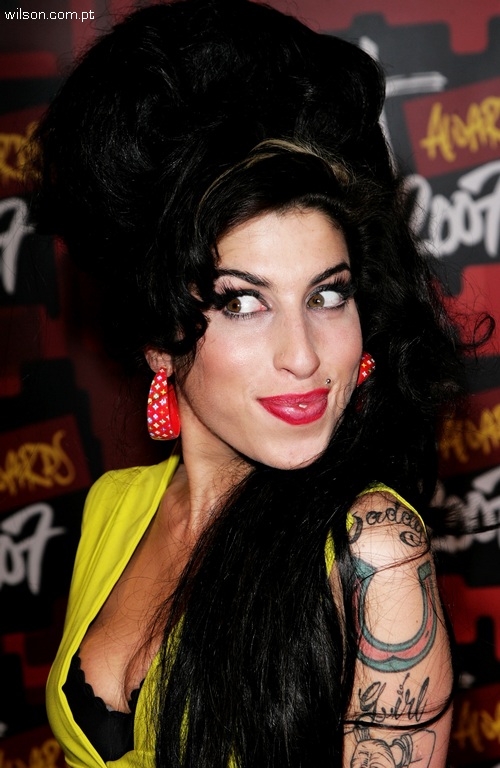 I’m sure you’ve heard the sad news of Amy Winehouse’s death aged just 27. As I type this the cause of death given by the police is ‘unexplained’ Unlike some interpretations I doubt there is anything sinister in this. Amy’s drug problems were much publicised and probably helped sell thousands of tabloids here in the UK. Whilst her passing is incredibly sad there is also an air of inevitability about it. At least now the tabloids are nicely chastened they will allow her friends, family and fans to grieve. 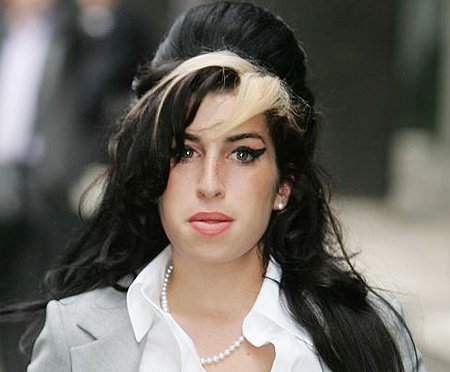 I believe that Amy was a truly talented and gifted individual. I remember buying her first album ‘Frank’ in 2003 after hearing some of it on the radio following it featuring as one of the nominees for the Mercury Music prize. It was (and still is) a good album and made me think that there was really something to this young lady. Clearly there was, her follow-up album ‘Back To Black’ remains one of my favourite albums and it’s such a shame there hasn’t been another since that in 2006.

She also recorded some great cover versions, pretty much making the Zutons “Valerie” her own. I really was rooting for her to come back with an amazing album a mega succesful tour and years of new music in front of her. I really wanted to see her in concert but I never got around to it. I’m sure it won’t be long before much of the talk is about the 27 club, which is derived from the age at which a number of talented musicians died; Brian Jones, Jimi Hendrix, Janis Joplin, Jim Morrison and Kurt Cobain to name a few. Indeed Amy is already included on the 27 Club Wikipedia page. Does that sound like a degree of obscene haste to you?

Billy Bragg mentioned this on Twitter earlier today and made the much more credible point that it wasn’t a specific age that killed any of these people, it was drug abuse. But enough of the salacious elements of Amy’s demise and let’s enjoy some of her wonderful music. My condolences go to her family, friends and fans.

When I started this blog back in February of last year the majority of posts were based around an ‘on this day’ theme. But my more recent posts haven’t covered that at all, however with the date today being 3rd July I felt that I had to revert to that format again, at least for this post anyway. So, why is 3rd July an important date in music? It’s the date the two of the famous quartet of 60s rock stars who died at age 27 passed away. That quartet, who all died within a two-year period at the tail end of the 60s and early 70s were Brian Jones (off of the Rolling Stones), Jimi Hendrix, Janis Joplin and Jim Morrison (off of the Doors). Jones died on 3rd July 1969 and Morrison on 3rd July 1971. Hendrix and Joplin both died in 1970 just 16 days apart, 18th September and 4th October respectively. 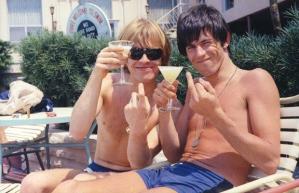 OK conspiracy theorists, here are Brian and Keef near a swimming pool, so was it Keef wot dun it?

Brian Jones was found dead in the swimming pool of his home in Hartfield, Sussex. It was the former home of A. A. Milne the creator of Winnie The Pooh. Jim Morrison was found dead in his apartment in Paris. Conspiracy theories have grown up around both deaths. There have been allegations that Jones was murdered put forward on numerous occasions, although given that he had recently been sacked from the band he helped create, the Rolling Stones, and his history with drug intake, that strikes me as unlikely. Jim Morrison supposedly died of heart failure supposedly brought on by a number of years of drug abuse. But as no autopsy was performed and allegedly only his girlfriend identified his body rumours abound that he faked his death. I love conspiracy theories but I personally don’t believe many of them at all. I know that the Apollo moon landings took place, I saw them on the TV! I would love to hear your views on conspiracy theories, especially those that are music related

There is much mythology built up around the magic 27 club, indeed this was reignited when Kurt Cobain (off of Nirvana) blew himself away in 1994. Personally I see the first four as having some kind of death of the 60s link, perhaps along with Altamont, but apart from purely his age I don’t see Cobain as really fitting in that group. However if you’d like to read more about the 27 club there is a Wikipedia page dedicated to the five I have already mentioned and many other musicians who also died aged just 27, click here to see it.

So to round off today’s little post here are a couple of clips of Brian Jones and Jim Morrison (and a sneaky audio clip of Jimi Hendrix with Brian Jones).

Hello once again good people I thought I’d try and sneak in a few posts in the vein I started this blog, so here for you regular readers are a bunch of ‘onthisdays’ To those non regular or new readers these are snippets of music trivia that took place on this very day. The day in question today is July 12th

On this day in 1954 a very young Elvis Presley, just 19 years old in fact resigned from his job as a truck driver with the Crown Electric Company. The day was made much more important by the fact that Mr Presley also signed a contract with Sun Records 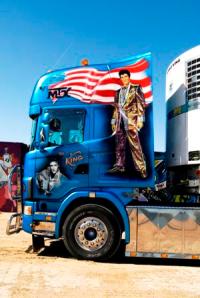 Even after he hit the big time Elvis refused to give up truck driving, although he did insist on using a customised rig 😉

On this day in 1962 Ray Charles was sitting at the top of the UK singles chart with the excellent “I Can’t Stop Loving You” I heard this a lot as a child as it was a great favourite of my parents. It was also one of the songs my Mum selected to have played at my Dad’s funeral in 2001. Another song played that day, was a massive favourite of my Dad, it was Rod Stewart’s excellent version of Gavin Sutherland off of the Sutherland Brothers’ “Sailing” Even now that song brings a tear to my eye, probably because it never fails to evoke memories of my Dad, a wonderful man who will always be missed. So dear readers tell me what songs make you cry and what your story is. In the meantime click here to see Rod singing “Sailing”. This one’s for you Dad! 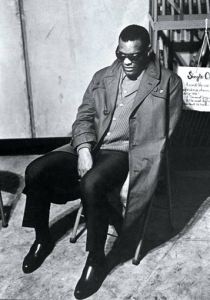 Also that same day in 1962 saw the live debut of a group you probably all know, it was at the Marquee Club in London and the group was the Rolling Stones. It was a bit of a different line up though, featuring Dick Taylor on Bass and Mick Avory on Drums. The band were actually billed as Mick Jagger and the Rolling Stones, I bet Keef and Brian weren’t happy with that (assuming they were a part of the group at that stage). They were paid the princely sum of £20 for the gig. A figure that might just about buy you a programme from a more recent Stones show

Mick thought he looked the business in his new jacket, the rest of the band thought less business and more…….twat!

I suppose todays final ‘onthisday’ is still somewhat topical. On this day in 1988 Michael Jackson arrived in the UK for his first ever solo appearances in this country. He had appeared many times before with his brothers but never alone. He played eight nights to nearly 800,000 people and apparently grossed around £13 million. So even before Thriller he was able to earn big bucks! Here he is performing “Wanna Be Starting Something” on the Bad Tour from 1987 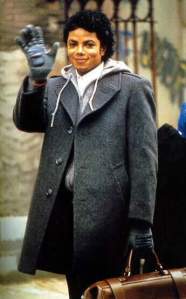 To finish todays post I want to share this excellent Evian advert with you. I believe it’s called ‘Roller Babies’ and it is soundtracked by the fabulous “Rappers Delight” by the Sugarhill Gang. Click here to view it

“My schemes, it seems, are merely dreams, fading with each morning” April 7, 2009

Hello everyone and welcome to this wonderful April 7th. I may not be posting every day in the future, but I’ll do my best! Today will be pretty much the usual format too. You’re probably all aware of the upcoming Faces reunion, apparently rehearsals are going on at the moment with four original members; Rod Stewart (vocals), Ian McLagan (keyboards), Ronnie Wood (guitar) and Kenney Jones (Drums). The current news seems to be that the late great (l’s and g’s back in the frame!) Ronnie Lane’s place will be taken by none other than Flea off of the Red Hot Chili Peppers. Here are the Faces in their heyday with “Stay With Me” live from the rainbow in London in 1972. 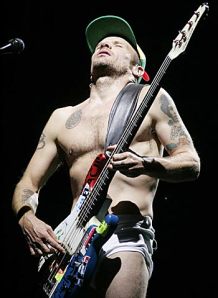 Flea was so desperate to play with the Faces that he sold his clothes to raise the money to join Rod, Ronnie, Ian and Kenney

I’m covering just one birthday today, the 62nd birthday of Florian Schneider-Esleben off of Kraftwerk. Although he left the band last year after an association with fellow band member Ralph Hutter that stretches back to the 60s. Florian also had a David Bowie (yes it’s been a little while but here’s another Mr B reference!) tune named after him. It was the largely instrumental “V2-Schneider” from the ‘Heroes’ album in 1977. Schneider was often seen as a perfectionist with Hutter once describing him as a ‘sound fetishist’. And for you fact fans Kraftwerk apparently means ‘Power Plant’ or ‘Power Station’ in German. Here are Kraftwerk with “The Robots” 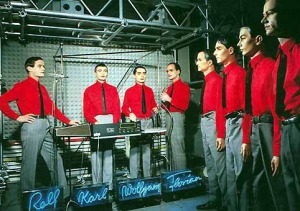 Kraftwerk often used dummies on stage whereas Robbie Williams.......... well you can probably guess the answer to that one!

On this day in 1956 The CBS Radio Network broadcast the first regularly scheduled rock ‘n’ roll radio show with the premiere of Alan Freed’s Rock ‘n’ Roll Dance Party. Freed saw himself as the father of Rock ‘n’ Roll and although he wasn’t the first to play it on the radio he is credited with coming up with the phrase ‘rock ‘n’ roll’ to describe it. Actually I read many years ago that the phrase was actually black slang words for sex. Does anyone know the correct answer to that one? Freed did an awful lot for race relations too bringing black and white folks together in what was still a heavily segregated country. Many stars including Little Richard have given him due credit for this. However at one point his TV show was canceled after Frankie Lymon was seen to dance with a white girl during the broadcast. You can’t get much more small minded than that, can you? Ultimately Alan Freed’s career was wrecked by the payola scandal. Payola was the name given to a form of bribery where DJs were paid money to broadcast specific records and in some cases even get themselves a writing credit on the song to boost their income. Freed allegedly did this with Chuck Berry’s “Maybelline” Click here for a sound clip of Alan Freed interviewing the late great (twice in a day now huh l’s & g’s?) Buddy Holly

Alan Freed tells his lawyer that perhaps he should have gone to Specsavers!

And finally on this day in 1962 at the Ealing Jazz Club, Mick Jagger and Keith Richards met Brian Jones for the first time. At the time Brian was calling himself Elmo Lewis and playing guitar with Paul Jones (no relation) who also went on to bigger things as a vocalist for Manfred Mann amongst others