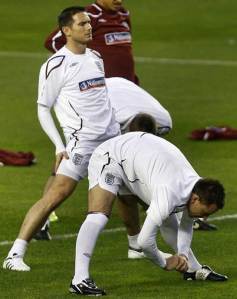 John Terry tries to tell the world he's a right tit, but he can't get that right either!

Well he we are the World Cup is once again upon us and it will be the 13th time that England have made it to the finals. We failed to qualify in 1974, 1978 and 1994. We didn’t enter the tournament until 1950 (it started in 1930), presumably because we too arrogant and assumed that we were best in the world already. That little myth was dispelled in the 1950 tournament when we lost to the USA in a group match. That is still seen as one of the biggest world cup upsets ever. Spookily enough we play the USA in our first game in South Africa 2010 tomorrow.

I know the song says “30 years of hurt” but that song is so old now that it is now in fact 44 years of hurt. It really is that long since we had our only victory in the tournament back in 1966. There have only ever been seven different countries who have won the world cup since it’s inception in 1930. Brazil (5 wins), Italy (4), Germany(3), Uruguay(2), Argentina (2), France (1) and England (1). So will this finally be England’s year? Well possibly, but not if it goes to penalties. But seriously with the players we have and the fantastic Fabio Capello as manager we must have a good chance. Spain are many peoples favourites and they do play some exquisite football, but pretty play doesn’t always win matches. Let’s hope that’s the case this time around. But for me and many other supporters watching England is often quite painful. I thought that was a peculiarly English thing, but I worked with some Germans in 2008 and watched the Germany games in the European Championships with them. They suffered just the same as us England fans, the key difference being that they are usually in the semi finals at least! 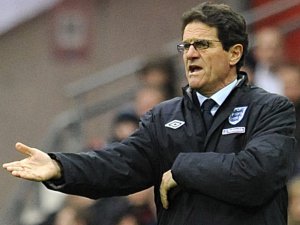 This is also the first time the tournament has been held in Africa so it would be fantastic for one of the African teams to reach the final. Algeria are the African representatives in England’s group, our other group opponents are the previously mentioned USA and also Slovenia.

My fondest memories of this mighty tournament comes from 1970, the England team that year for me ranks as the best ever. How we lost to Germany in the quarter finals I do not understand. But Brazil were simply worlds apart from everyone that year, what a team.

I also recall that when I was young we used to chant for ENGLAND, what I’d like to know is why the hell has that now become INGERLAND? Your answers and suggestions are very welcome, even if they are completely made up.

Fabio signals to the referee and somehow I don't think he's talking about time added!

Now I must disappear and put the flags of St George on the car for the duration!

But before that I need to finish with some of my favourite England songs;

“Back Home” – England 1970 World Cup Squad. The Daddy of all songs sung by football teams

“World In Motion” – Englandneworder. Probably my favourite footie song ever and it even comes with a John Barnes rap!

“Three Lions” – Baddiel and Skinner and the Lightning Seeds. Still emotes all the hurt of watching England get knocked out on penalties in seemingly every tournament

“Vindaloo” – Fat Les. Unbelievably catchy and completely bizarre, but I love it.

Simon Cowell has got in on the act this year too, he has put together an England related cover of Tears For Fears “Shout” by James Corden and Dizzee Rascal