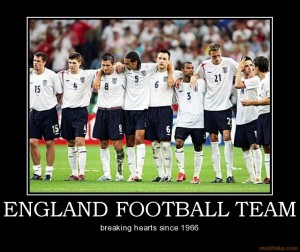 I suppose it took quite a long while to sink in just how bad England were yesterday against Germany. Sure we can drone on endlessly about the ‘ghost’ goal and how things might have been different if we’d have gone in at half time at 2-all rather than 2-1 down. But let’s be honest England were woeful, that’s not to take anything away from Germany though, they really were first class. But FIFA ought to climb out of the dark ages and allow goal line technology. Are we paying the price for the failure of the FA to understand what strategy is? Are we failing because the FA have still failed to get the Centre Of Excellence in Burton off the ground. Or is this reaping the rewards of a rich and greedy premiership which covets foreign players more than homegrown talent?

I don’t know the answers, but I do know that Terry and Upson looked like they barely knew each other, Johnson and Cashley seemed to forget that they are in fact defenders and Rooney disappeared. As for Capello I had a lot of sympathy for him during the tournament, that expired when in desperate need of a goal he put on that well-known goal scoring machine Emile Bloody Heskey! The only good word I have is for David James, without him the Germans could have made it look like a cricket score

So once again we are not champions of the world and it will be at least 8  to 12 years before we are even remotely in contention again. We didn’t even win the World Chumpions mantle, that surely went to France or Italy. I can only hope that this bunch of 23 millionaires feel the worst they have ever felt when they return to England tomorrow, obviously this will be before they jet off on some expensive holiday! Boys you have sullied the memory of the great Bobby Moore, just ponder that for a while.

“You Don’t Know (Fuck Off)” – Reel Big Fish – I know it’s not really called fuck off, but that is my sentiment towards the England players right now

“Failure” – Laura Marling – Another title that sums it up

“The Lion Sleeps Tonight” – Tight Fit – In memory of England’s three lions, who all slept yesterday

At last the England team showed some spirit and fight in beating Slovenia one-nil. Gone were the pathetic shadows that played against Algeria and back were players who actually seemed to have pride and passion. So now, thanks to a late USA goal against Algeria, we have to play Germany on Sunday at 3 o’clock. But at least we now appear to have a team more like Gladiators than Muppets.

Let’s hope it’s not the usual result against the Germans in a World Cup knockout match. As we well remember we beat them in the final in 1966, then lost 3-2 in the 1970 Quarter Finals after being two goals up and  in 1990 we lost on penalties in the semi Final. We also lost on penalties to them in the Semi Finals of Euro 96. How good would it be for Sundays match to go through extra time and for us to beat Germany on penalties? We must win a penalty shoot out sometime, right? just don’t let John Terry take one!

Have England got their mojo back? I hope so. I am proud to be an England supporter once again anyway!

On Sunday boys go out and do it for God, for Fabio and for England!

Here is Defoe’s goal from the Slovenia game 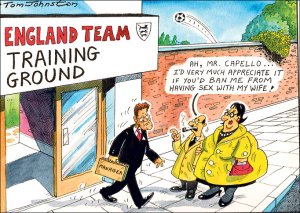 “Everyone’s A Winner” – Hot Chocolate. These guys were one of my favourite bands in my formative years and did you know that their famous “You Sexy Thing” song was originally the B Side of a non hit called “Blue Night”?

“Victorious” – Linda Bengtzing & Velvet. Honestly I had never heard of Linda before searching for appropriate songs for this post, but I now know she is Swedish!

“Let’s Go All The Way” – Sly Fox. This was a big hit in 1985 and the vocalist was formerly a singer with one of my favourite bands Parliament/ Funkadelic, his name is Gary ‘Mudbone’ Cooper