American rock band Kiss are tailor-made for appearing in comics and they have on many occasions. But did you know that their first ever appearance in a comic was in a 1977 issue of ‘Howard The Duck‘? Has anyone got a copy of that comic? As well as appearing in their own comic book series the band have also appeared on the Simpsons as themselves. 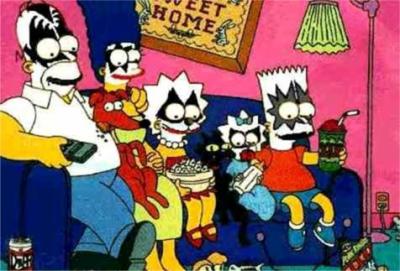 During my formative years I was a big fan of the USA. This view was largely developed from reading Marvel comics, the Apollo missions and watching westerns and war films on the TV. As I got older and became interested in politics my views on America flexed somewhat. Whilst there is much to love about the place there is an awful lot to dislike. I love New England, San Francisco, Marvel Comics and Stephen King to name but a few. I dislike, again to name just a few, the Republican party, the Christian right, Dubya, Gun laws and the way Hollywood changes so much in movies (The ending of I Am Legend, Disney‘s version of Winnie the Pooh and the fact that no Americans were involved in the real Great Escape)

But I do have a number of friends and readers that are Americans so I would like to take this opportunity to wish you a very happy Independence Day from a Brit across the pond. To help you celebrate here are some of my favourite USA themed songs

“They say a secret is something you tell one other person” January 5, 2012

Despite all its false starts, technical problems and the death of Producer Tony Adams it seems that the Spiderman Musical may actually achieve big success on Broadway and beyond. The full title of the show is ‘Spiderman: Turn Off The Dark’ and it was written by Bono and The Edge off of U2.

It grossed $2.9m from 9 shows in its first week which beats the previous record of $2.2m taken by ‘Wicked’ from 8 shows in it’s first week in January 2011. Takings for ‘Wicked’ during Spiderman’s first week were $2.7m. Whilst this is a great start for Spiderman it should be balanced against the fact that it is the most expensive show ever put together for Broadway at $75m.

If it remains successful I wonder if it will lead to a whole stack of other superhero related musicals. Perhaps Meatloaf as the Hulk could be an option. What ideas do you have for superhero shows?

I thought I’d finish this post with a classic and appropriate U2 song which you can watch below on the web! (geddit?)

We went out to catch the latest Marvel movie today; Iron Man 2. I felt it was a pretty good movie but perhaps not quite as good as the first instalment, although Robert Downey Jr plays the Tony Stark/ Iron Man role supremely well. Samuel L Jackson is also brilliant as Nick Fury.

The action scenes are excellent and there is a great teaser at the end that points to a forthcoming Avengers movie. So at last the whole Marvel Universe is hitting the screens! I was disappointed that I didn’t see the usual cameo from Stan Lee, but maybe I missed it.

Iron Man seems to be doing a number two!

The soundtrack is unusually not a mixed compilation, but more like a best of AC/DC, although there are a couple of other noticable songs used during the film; “Magnificent Seven” from the Clash and “Pick Up The Pieces” from the Average White Band. The end credits are soundtracked by one of my favourite AC/ DC songs, “Highway To Hell”

If you like Marvel movies you will love this, I will definitely get the DVD when it comes out too. Now roll on the next Fantastic Four instalment, the Thor movie and then the Avengers!