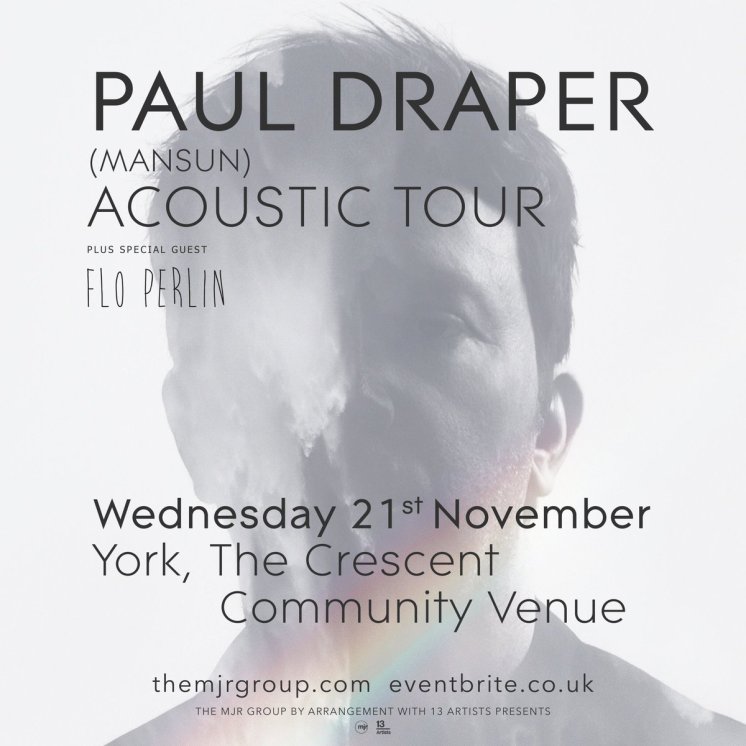 Mansun’s ‘Attack Of The Grey Lantern’ has remained one of my favourite albums since its release back in 1997. I was also lucky enough to see Mansun twice at the Reading Festival back in 1996 and 1998.  So the prospect of seeing Mansun main man Paul Draper solo in my adopted home city, York was exciting. Made even more interesting having reviewed Draper’s solo album, ‘Spooky Action’ and the reissued ‘Attack Of The Grey Lantern’ earlier this year for those wonderful folk over at 3 Songs & Out. Mr Draper is currently winding up his first ever solo acoustic tour aided by the mega talented guitarist Ben Sink. But before I tell you about that dynamic duo I need to update you on the rather spiffing support act Flo Perlin and her band. If I had to put Flo into any genre I might opt for modern folk singer. However her voice is that of an angel and has some of the crispness and clarity of a young Karen Carpenter. She is also a skilled multi instrumentalist, this evening she showed her prowess on guitar, ukulele and keyboards. Her songs feel like they are written from the depths of her soul and seem to be very much about her life. I was really keen to meet her afterwards and buy her album, ‘Cocooned’, but sadly by the time I went to the merch stand later in the evening she had left. her parents were in the audience tonight and I am sure they are very proud of Flo. Rightly so too, this was a classy and heartfelt performance. In addition to Flo’s excellence I should also mention the supreme contribution of her band on beautiful harmonies, violin and understated but perfect percussion. You really should check her out.

Paul Draper and Ben Sink hit the stage at around 9:30 by which time what had looked like a relatively small audience had grown considerably. The balance was probably around 70% Mansun songs and the rest from Paul’s solo career. When you hear some of these songs played in such a raw form it shows you just how bloody brilliant they are. “Friends Make The Worst Enemies” and “Jealousy Is A Powerful Emotion” were highlights from Draper’s solo repertoire. From the Mansun years it was “Dark Mavis” and a song that is among my most favourite ever by anyone, “Wide Open Space”. It is so hard for me to recognise that the latter two songs are more than twenty years old. But I guess that just defines the word timeless! The complexity and emotion of his songs is immense. Draper’s vocals were spot on the whole night, even if he surprised himself by hitting some of the higher notes. Musical backing was Paul Draper with highly effective acoustic guitar playing and an almost ethereal electric guitar performance from Ben Sink. His gorgeous musical motifs swept in and out throughout each tune enhancing what you might have believed could not have been enhanced. His style was for me reminiscent of Bernard Butler in the early days of Suede. Mr Sink also plays guitar with the Anchoress among others. His prog like creativity is the perfect foil to Paul Draper’s wonderful delivery of his often incredibly deep lyrics. Paul handled one particular über fan very well addressing being heckled with a great sense of humour. This just made me ponder how difficult it can be for performers when they face their “number one fan” (to quote Stephen King). Listening and watching tonight’s performance made me realise what a very special songwriter Paul Draper is and I do not believe he gets the recognition that he deserves. But now with a masterpiece of a solo album and a better back catalogue than may of his Brit Pop peers maybe he will.

Public Service Announcement: – All photographs (except the gig flyer) were taken and edited by me using my cheap android phone from China. All videos were found on YouTube. If one of the videos is yours and you would like a credit or for it to be taken down please let me know. 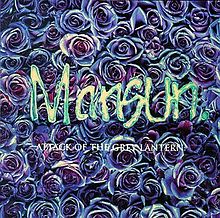 Once again those generous music folk over at 3 Songs & Out have given me another excellent album to check out. This time it is the deluxe reissue of Mansun’s début album ‘Attack Of The Grey Lantern’. Click here to read my review and relax in the wonderful musical ambience and knowledge you will find at 3 Songs & Out! But obviously feel free to come back to With Just A Hint Of Mayhem soon too.

Click here to read my review of Paul Draper’s ‘Spooky Action: Special Tour Edition’ album. This is a classy album that comes highly recommended by me. I would also like to say a big, big thank you to those cool folks at 3 Songs & Out for giving me the opportunity to hear it pre-release.

“And he’s making wine from water while he dresses like his daughter” November 5, 2010

Yesterday morning I arrived at the station in plenty of time as usual to catch the 7.27 from York to Chesterfield (I really do get to the most exciting places don’t I?). The first thing I saw when I came into the main concourse was the cancellation notice for said train accompanied by quite a few angry commuters. Personally I refuse to get angry about that kind of stuff anymore, frankly it’s a waste of energy. So the cancellation of the Cross Country Trains 7.27 service from York to Reading via Birmingham was an opportunity for me. I dashed over to Costa Coffee and spent 30 minutes reading the Guardian with a cup of tea. Obviously the tea wasn’t reading the Guardian, I was!

Incidentally the train was cancelled owing to a ‘shortage of train crew’ which I don’t think had anything to do with the stature of the driver, guard or trolley dolly!

When I eventually boarded the train it was, as expected very crowded. So I figured I would just lean against the wall in the vestibule, listen to my iPod and read. I positioned myself opposite the open door and was listening to the hubbub af anger and complaint. Phrases like “couldn’t organise a piss up in a brewery”, “there’s less shit in a sewage farm” “what a bunch of useless tossers” were used to describe the rail operator, so it was clear that many people were very angry. Not me though, I don’t see the point, anyway there was quite a lot of swearing too, that stopped however, straight after a vicar boarded the train. (Incidentally it was a male vicar and sadly not Dawn French in her Dibley role). The comments then became most polite “did you see that thing on ITV last night”, “the weather isn’t great is it?” and “did you watch the football last night?”. Now I don’t know why this happened, is it because everyone has respect for a man of the cloth or perhaps people have an underlying belief that bad language offends religious people. I would love to hear your thoughts on the matter though. I am no authority on religion, I’m not religious and considered myself an agnostic, then an old boss of mine said that an agnostic was just an atheist with no balls, so I guess that’s what I must be!

As always this is a music blog and this post gives me the opportunity to post some vicar related music, something I don’t think I’ve done before. So for what you are about to receive may the god of rock and the no balls atheist make you truly thankful, Amen!

Firstly the incredibly underrated Mansun with “Stripper Vicar” The song is taken from the excellent ‘Attack Of The Grey Lantern‘ album which singer Paul Draper originally conceived as a concept album where the Grey Lantern was a superhero in an English Village. But he apparently he ran out of steam so it’s only partly concept. In fact Draper has referred to it as con album rather than a concept album! “Stripper Vicar” was released in 1996 with the album following in 1997.

Next it’s the Smiths with “Vicar In A Tutu” preceded by “Bigmouth Strikes Again” taken from a Whistle Test performance. The song is track 8 on one of the greatest albums of all time (in my humble opinion at least) ‘The Queen Is Dead’ from 1986

And finally, not really music, but very funny, Rowan Atkinson as a vicar in a ‘Not The Nine O’Clock News‘ sketch on Songs Of Praise