Daft Punk‘s stunningly great single “Get Lucky” is now the biggest selling UK single of 2013. The song which also features Pharrell Williams and Nile Rodgers reached sales of one million only 69 days after it was released. Only one other French act has hit the million mark for a UK single and that was David Guetta with “Titanium” which hit that peak a few weeks ago some 79 weeks after its release.

Another three UK singles have finally reached the heady heights of one million sales this year and they were released in 1976, 1995 and 2001. The songs in question are;

“Don’t Go Breaking My Heart” – Elton John and Kiki Dee. I assumed that had already sold in excess of a million

“Mysterious Girl” – Peter André. Seriously? Who on earth is buying this crap so long after it was released. If I find out who you are I will come to your house cover you in honey and tie you down above an ant’s nest. I will also put a wasp’s nest on your head. All the while you will be forced to listen to Peter Andre‘s Greatest Hit ( a very short compilation) over and over on endless loop.

“Whole Again” – Atomic Kitten. Once again, who the hell is still buying this? the punishment will be similar to the above but instead of listening to Peter André you will be subjected to an endless loop of Kerry Katona‘s appearances in TV commercials for the Iceland chain.

However as an act of leniency on my part if you ‘fess up to these appaling crimes now then you will be forgiven. So if you are guilty and also feel the need to come clean then come to Father Bill’s Confessional Box a.k.a the comments facility in this blog! 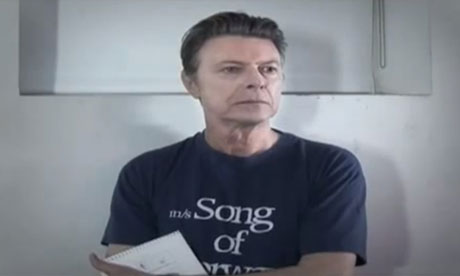 The NHS in Britain recently used the services of a 66-year-old ex-pat pensioner living in New York to promote their National Blood Week from 10th – 16th June. How did they come to pick this mature ex-pat pensioner I hear you ask? Well quite simply really. he has used vivid blood-red make-up in the past and has also written some rather nice words that fit their campaign reasonably well with a subtle change. The person in question is none other than David Robert Jones a.k.a David Bowie. The slogan for the National Blood Week in the UK was ‘you can be heroes for more than one day’. Click here if you’d like to learn how to give blood in the UK.

“What keeps the planet spinning”

Those two chaps off of Daft Punk; Thomas Bangalter and Guy-Manuel de Homem-Christo met as young lads at school. In a strange twist of fate though they both attended the same show as their first gig some two years before they met. It was Bruce Springsteen in Paris on the Born In The USA tour in the mid 80s. 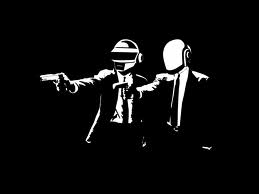 “The anthem of our generation” 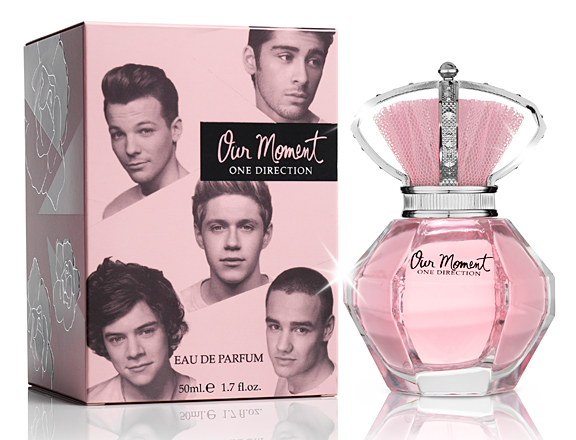 Those lovable urchins One Direction (a.k.a. Wand Erection) have come up with a new wizard wheeze to keep them in the public eye for as long as they can; well at least their management have. they now intend to compete with many female artists not in the charts, not on arena stages but in the nostrils of their fans. Just like J-Lo, Beyoncé, Lady Gaga and many others they have launched their own perfume! It is called ‘Our Moment’ and in my opinion is the serious milking of the 1D cash cow. It apparently mixes a number of scents into a kind of ‘fruity florals’ smell. What the fuck is that all about? They’re young men; surely it should smell of pheromones, sweaty armpits, beer, fags, kebabs, burgers, Nandos and stale farts? I suppose that if nothing else it does support the notion that the polished turd that is One Direction really does stink!

Vanilla Ice is scheduled to take part in a new reality TV show. he will be joining an Amish community in the unimaginatively titled ‘Vanilla Ice Goes Amish’. I have never liked reality TV and this means I now like it even less! What do you think of this idea? Have you seen the show? 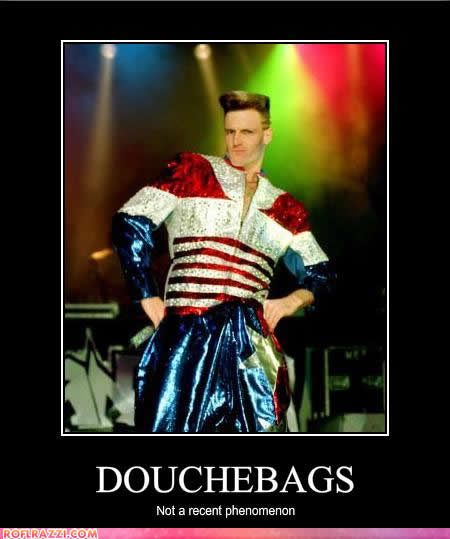 “It’s complicated and stupid, got my ass squeezed by sexy Cupid” 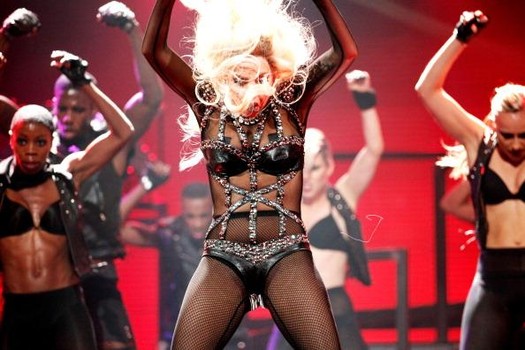 Gaga had quite a complex athletic support following her hip operation

I find this somewhat hard to believe but apparently Lady Gaga is a big fan of the BBC’s ‘Top Gear‘ show. She supposedly watched many episodes of the show while she was recovering from her recent hip operation. I’m also perplexed that she thought she needed an operation to become hip or is she now very much into hip op music? I wonder what Jeremy Clarkson and the boys think of their newest fan.

It looks like the nail operation wasn’t a success

Does Ken have a pimp suit? 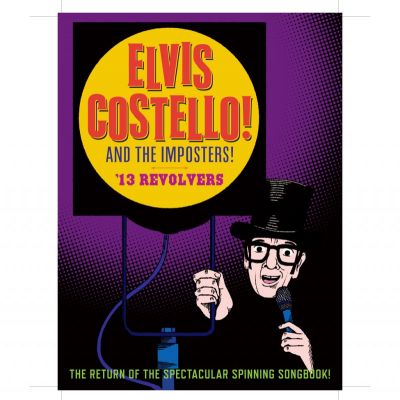 Tonight I saw Elvis Costello for the first time since I saw him in London in 1977. I was struck by the sheer volume of classic songs he has recorded in a career spanning close to 40 years. I love that he often strays from the path trodden by many contemporaries by recording a country album, recording with the Brodsky Quartet and producing the Specials. He arrived at York as part of his 13 Revolver Tour with a show featuring the Spectacular Spinning Song Wheel. 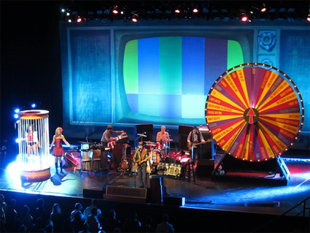 He opened the set with a blast of four or five loud and powerful power pop songs culminating in the magnificent “Radio Radio“. The principle of the wheel is that members of the audience are picked to spin the wheel and the band play the song that is randomly selected. Tracey and Carol were given a storming version of “(I Don’t Want To Go To) Chelsea”. 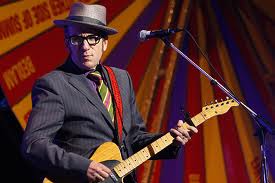 Later a Catherine and Alex took to the stage and when asked her favourite song Catherine replied “She” the Charles Aznavour song. Now that is a song I really dislike so I was very pleased when Mr Costello said “I fucking hate that song”. However Alex and Catherine spun the Joker and were allowed to choose their favourite. After Costello had sung “She” for them they danced in the cage podium for a while. As they were about to leave the stage Costello’s assistant, the Mysterious Josephine whispered to Elvis and young Alex and Catherine took the microphone for Alex to propose to his beau live in front of thousands of people. He did a great job. Catwoman, who accompanied me to the gig, was in tears! Oh and Alex had a yes from Catherine. If they are reading this I would like to wish them all the best. 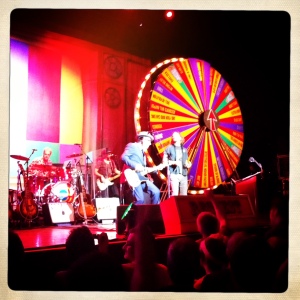 My favourite song of the evening was a stupendous “Watching The Detectives” which included Costello walking through the crowd singing with a radio mic. He is clearly a great showman and he is gifted in stage craft. The band are very tight and are made up of Drummer Pete Thomas and keyboard maestro Steve Nieve formerly of the Attractions and Davey Faragher on bass. I was very pleased that they played two classic anti Thatcher songs; “Shipbuilding” and “Tramp The Dirt Down”. The latter received a massive cheer I am pleased to say. He showcased his true and pure vocal talent by stepping away from the mic at the end of “Jimmie Standing In The Rain” for a few lines of “Brother Can You Spare A Dime” 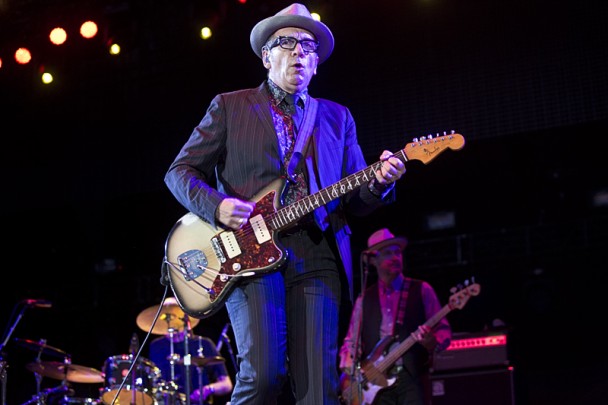 The show kicked off at 8 o’clock and it was nearly 10.30 before the house lights came back on. Just when you thought it couldn’t get any better the band returned after a minute or two off stage for an astounding encore. Kicking off with “Alison” and closing with “Pump It Up” and “(What’s So Funny About) Peace Love And Understanding” whilst finding time for “I Can’t Stand Up For Falling Down” and “High Fidelity”. The encore provided a fabulous climax for the excellent go-go dancer too.

This show sits easily in the top 5 gigs I have ever seen in my nearly 40 years of gig going. I will definitely go to see Elvis again and you should too. Trust me you will not regret it! Oh and by the way, none of the pics or videos in this post were taken by me. I can’t be arsed to keep getting my camera out at gigs, I’d rather enjoy the show!